The European Court of Justice (ECJ) ruled that the Hungarian Lex NGO law breaches European Union laws on the freedom movement of capital as well as fundamental EU right on the respect of private life, protection of data and freedom of association 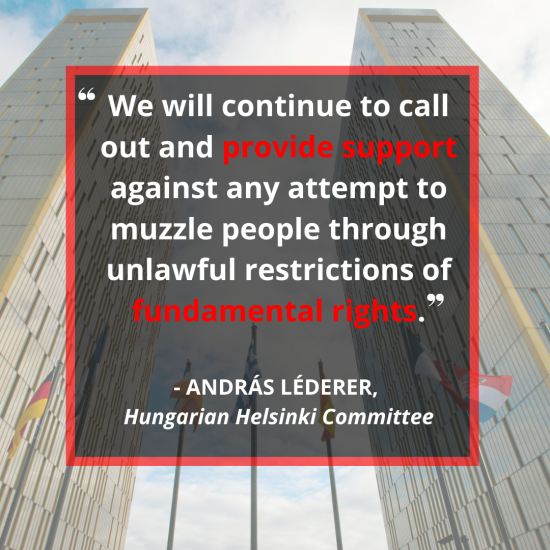 In 2017, the parliament of Hungary under the rule of Viktor Orbán passed the Lex NGO law on the ‘Transparency of Organisations Supported from Abroad’. The law introduced restrictions on Hungarian NGO’s to receive funding outside of Hungary. NGOs that receive funding over €22.000,- from abroad were obliged to register the information and disclose details of the donors to Hungarian authorities. This information would be made public. The restriction had a negative impact on the performance of NGOs and according to András Léderer of the Hungarian Helsinki Committee the law could even lead to the dissolution of some organisations. András explained that the law carried the additional burden of constantly reporting the situation to partners and donors, instead of focusing on the actual work. “All this was of course an intended consequence of the law” said Léderer.

Civil society looks at it as a clear reaffirmation of its fundamental role played in a democracy and an encouragement to continue its work unhindered by unlawful restrictions and administrative measures.”

The Hungarian government argued that the Lex NGO law was necessary to combat crimes of money laundering and terrorism. The ECJ has, however, ruled that the practice introduced by the law are discriminatory and imposed unjustified restrictions.

The ruling is welcomed by the NGOs in Hungary as it affirmed not only the crucial role civil society organisations but their marginalized position as well.

When asked about the ruling Léderer said “Civil society looks at it as a clear reaffirmation of its fundamental role played in a democracy and an encouragement to continue its work unhindered by unlawful restrictions and administrative measures. The judgment is also important for the loose coalition of NGOs that came together to resist these provisions in 2017: it shows that resilience and brave decisions reflecting solidarity among a very wide range of actors will yield results.”

What the ruling means for the fate of Hungarian NGOs remains to be seen, Léderer noted. He shared that the government is currently looking for ways to circumvent the decision instead of repealing the law. NGOs in the country will continue to fight for civic space Léderer said, “Regardless of the path the government will take, we continue our work towards ensuring that all non-governmental organisations can operate freely in Hungary without government pressure. We will continue to call out and provide support against any attempt to muzzle people through unlawful restrictions of fundamental rights.”

Through its ruling, the ECJ sends a clear message to all EU members states that it is not acceptable to restrict funding for civil society organisations that monitor governments compliance with fundamental rights, such as the right to assemble and free speech.”

Rising tensions between Budapest and Brussels

The Lex NGO law is not an isolated incident but rather shows a pattern of rising tensions between the Hungarian government and the EU. Other points of contention include the country’s hostile stance on migration and more general rule of law concerns, e.g. freedom of the media and independence of the judiciary. Orbán has repeatedly clashed with the EU , accusing Brussels and the ECJ of meddling with Hungary’s political affairs. He claims the policies enacted by the Hungarian parliament on the rule of law and migration are at the will of the Hungarian people. The ideological conflict between Budapest and Brussels remains to this day a controversial and debated topic as the rule of law continues to backslide.

The backsliding rule of law in Hungary transcends a national borders; it is in fact a concern for the EU as a whole. The European Union is built upon the shared values of human rights, democracy and the rule of law. If one member of the EU infringes on these values there could be consequences for all other states involved.

The ECJ ruling affirmed the importance of upholding European values stated NHC director Pepijn Gerrits, “The free movement of capital as well as fundamental rights, both enshrined in the EU Treaty, provide the very fundaments of the Union. Through its ruling, the ECJ sends a clear message to all EU members states that it is not acceptable to restrict funding for civil society organisations that monitor governments compliance with fundamental rights, such as the right to assemble and free speech.”

Next steps in defending civic space in the EU

Gerrits further elaborated, “The NHC and its partners will continue to forge alliances to at national and EU level to advocate for upholding the rule of law, independent judicial systems and accountable institutions. The funding the NHC and its partners receive from private foundations, such as the NPL (Nationale Postcode Loterij) and others, are essential in ensuring a continued capacity to unite and monitor government implementation of policies in an independent way.”

During a webinar conference organized by the German Institute for Human Rights on 25 June 2020, Director-General of Justice Didier Reynders announced that the commissioner will ensure the cancellation of budget cuts planned for the ‘Justice, Rights and Value Programme’. We urge Reynders to hold up to this promise, as the fund will be essential in supporting a strong civil society in Europe.

The LGBTI+ Community Contribute to Society Just Like Everybody Else! – Awareness Raising Campaign Launched in Albania