Towards a Safe, Stimulating and Rehabilitative Prison Environment for Children and Juveniles in Conflict with the Law in Albania, Kosovo and North Macedonia

During their time in detention, juveniles in Albania, Macedonia and Kosovo face many problems which make it difficult for them to work towards their successful reintegration in society. In cooperation with the Albanian General Directorate of Prisons, the Kosovo Ministry of Justice/ Kosovo Correctional Centre and the Directorate for Execution of Sanctions of the Macedonian Ministry of Justice the Netherlands Helsinki Committee devised a project to contribute to a reform of the Prison system in Albania, Kosovo and Macedonia by improving the possibilities of juvenile detainees to successfully reintegrate into society by introducing official working methods for prison staff and integrating these in official policies and curricula of Educational Institutes while at the same time strengthening the capacities of prison staff, prison management and representatives of the Ministries of Justice in the three countries. The project is based on the idea that detention conditions that favour re-socialization and active involvement of juveniles in daily educational and/ or vocational activities are more successful for their reintegration into society.

This programme builds on the results of the successful 2013-2017 MATRA/CoPROL project which the NHC implemented in Albania, Kosovo and North Macedonia. This project achieved important changes in the targeted juvenile correction centers regarding the establishment of a safe and rehabilitative environment and introduced new effective elements of a daily program. However, additional supportive working methods need to be implemented and changes need to be further consolidated and institutionalized in the prison system. The previous results offer an excellent basis for cooperation to ensure that the working methods and the change of culture become an integral part of each national prison system, sustained by and embedded in its policies and institutions. 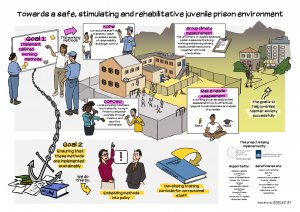