Yasemin Öz is a human rights lawyer and defender, who contributed to the foundation of the LGBTI+ rights movement in Turkey. Despite the often dangerous situation in the country for civil society and especially for LGBTI+ activists, Öz has remained steadfast in fighting for her beliefs and defending the rights of all people. Sustained attention and a proactive strategy by the EU and its Member States is needed to defend Yasemin Öz and other human rights defenders in Turkey from further criminalisation and reprisals for their work.

The portrayal of Öz’s situation is a continuation of the series, “Defending Human Rights in Turkey: Stories that Need to Be Heard,” told by Tan Tunali, with illustrations by Marco Lambooij. 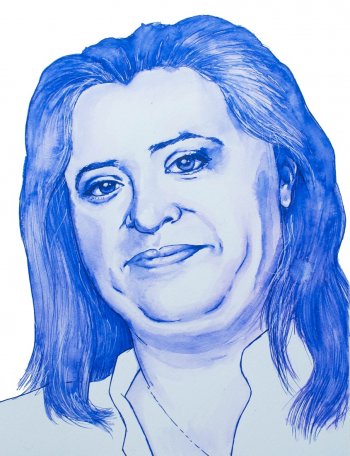 A water-colour depiction of Yasemin Öz

When Yasemin Öz started studying law at the University of Ankara, she did not have the words to express her attraction to girls—but that was about to change. In 1994, she was part of a group of university students who met for discussions. These meetings eventually evolved into the development of a stencil magazine which tackled different topics of relevance for LGBTI+ people each issue. Öz decided to join them. “After my first meeting, I started calling myself gay and a lesbian,” she recalled. “I had always known that I was gay, but I thought that there had to be some sort of specific criterion [to call oneself that],” she explained. More than two decades later, the organisation that emerged from those meetings, KAOS GL, short for Kaos Gay and Lesbian Cultural Research and Solidarity Association (Kaos Gey ve Lezbiyen Kültürel Araştırmalar ve Dayanışma Derneği) continues its significant work. Today it is one of the leading NGOs for LGBTI+ rights in Turkey.

The early days of KAOS GL helped Öz and other organisation members to better understand themselves and each other. It also provided general information to others who did not fit into society’s gender norms. They could approach KAOS GL with questions and for support. Öz knows the importance of finding people who understand the difficulties of asserting your LGBTI+ identity. “As a child, I wanted to fit in, but because I was attracted to girls I was constantly reminded that I did not. My teacher even made me visit a psychiatrist,” Öz recalled her time in high school.

If you are not able to speak up in your own group, it will be very difficult to make your voice heard in society,”

In the 1990s, the internet was not commonly used and information on the topics covered by KAOS GL was scarce. There was a lack of literature and examples in public life, especially for lesbian women, Öz pointed out. In Turkey, there are two famous singers who are open about their LGBTI+ identity: Zeki Müren who was openly gay and Bülent Ersoy who is a trans-women. But for lesbians, Öz noted, even today there are almost no role models in which lesbian women can recognise themselves. “Is there one famous lesbian in Turkey?” Öz asked, “I must be Turkey’s most famous lesbian. And I am not even famous,” Öz laughed.

In the early days, KAOS GL gathered in cafés frequented by leftists, but even in these environments, they were cautious about being overheard. Their presence as a group was still seen as a taboo so they were forced to whisper during their meetings. Now Öz realises that this secrecy was a big obstacle. “If you are not able to speak up in your own group, it will be very difficult to make your voice heard in society,” she explained. Being able to do so without any fear is a valuable lesson Öz has learned during her lifelong struggle for LGBTI+ rights, for which she received the Felipe de Souza Award in 2013.

After Öz graduated in 1997, she began working as a lawyer, but along with many others who entered the workforce, she remained actively involved in the debates KAOS GL had started. She and her fellow activists tried to keep the organisation active. Relying solely on volunteers, this was not an easy task. They would send the magazine for free to LGBTI+s in prison; costs kept exceeding their income. “If we could not make ends meet, we would ask members earning the most to help pay for rent. It was rather tiring and we spent a lot of time trying to keep KAOS GL afloat—time we would have rather used to develop politics,” Öz added.

When Mama Cash, a Dutch NGO, provided financial support to KAOS GL in 2001, they were finally able to establish an office where discussions could be organised, people could be invited to attend lectures-this all helped in professionalising the grassroots organisation. Other financial issues improved with the introduction of a subscriber system, and four years later KAOS GL acquired the legal status of a foundation. Acquiring this legal status was not easy. When KAOS GL’s first applied for its legal status in 2005, the Ankara governor lodged a complaint, arguing that the organisation violated public morality. However, the public prosecutor assigned to this case decided not to proceed, ruling that homosexuality was not immoral. Öz was involved in preparing the landmark case for KAOS GL. She has also worked as a lawyer for the organisation on several other cases, including the attempted prohibition of an (unpublished) magazine issue on pornography and violence against trans women in Turkey.

At the beginning of the 2000s, with the newly elected Justice and Development Party (AKP) government, the political climate appeared to be more favourable for LGBTI+ rights. The AKP aspired to join the European Union, and the opening of the accession process in 2005 led to the adoption of laws that expanded minority rights. At the same time, access to the internet became more common, making it easier for activists to organise, share and obtain information. In this context, in 2007 the first big LGBTI+ Pride March was organised in Istanbul, bringing thousands of activists together from different LGBT and feminist groups. Öz, who had moved to Istanbul for her work, helped with the organisation of the event in her capacity as a lawyer.

Since then, the LGBTI+ Pride March has grown in numbers every year, reaching over 100,000 participants in 2013, the same summer as the widespread Gezi Park protests (Read about Cihangir Öz’s experience in accepting their gender identity during these protests). The nationwide protests, which started as an environmental protest to stop the demolition of a park, quickly turned into an anti-government protest against increasing authoritarianism, which had extra meaning for the LGBTI+ community. “The park was a place where LGBTI+ people could sit freely during the day,” she explained. During the protests, the LGBTI+ community was very visible and managed to make new alliances within other activist circles and the human rights community.

“These alliances are very important,” Öz said. She referred to KAOS GL’s activism to end the ban on headscarves in place in public institutions until 2013 as an example. “If a religious man can enter public spaces, religious women should be able to do so as well. I might not agree with that group’s worldview but that’s not the point. I have to defend them when they are discriminated against. Only then can we challenge the ideology that imposes these exclusions on all of us,” Öz argued.

Currently, Öz is working on KAOS GL’s annual human rights monitoring reports, collecting and documenting instances of discrimination against LGBTI+ people. In the latest report, few positive notes were made. Currently, all civil society is facing enormous pressure from the government—made even worse after the 2016 coup attempt—with fines, purges, closures and imprisonment. Pride marches have been banned and attempts to hold them despite the restrictions have been met with police violence. To Öz, the repression signifies the increased importance and power of the LGBTI+ movement: “Before, we were not taken seriously, but now our identities cannot be denied anymore and I am sure that we are facing repression today because we are seen as a force,” Öz concluded.