In Albania, despite legislation on LGBTI rights being largely in place, and in line with international standards, implementation continues to be an issue, particularly in rural areas. We are working to strengthen police and justice chain response to hate crimes and discrimination against the LGBTI community. In this interview by the NHC’s Roshni Ramautar, our partner, Sidita Zaja, Executive Director of the NGO Pro LGBT in Albania discusses the changes made through our project, and how cooperation with the Albanian police is going.

What change in society do you want to see and hope to move towards through this project? 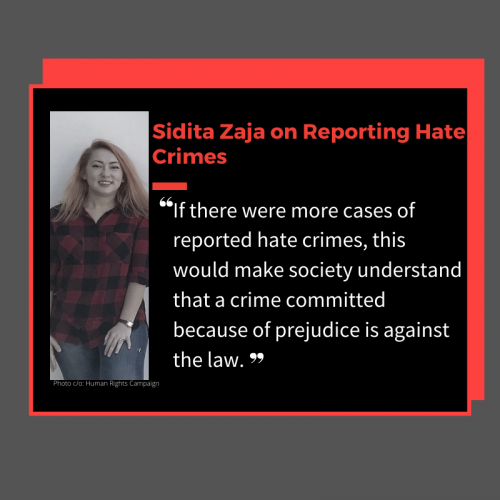 From the part of the police, we want them to treat relevant cases as hate crimes. In Albania, we already have laws on hate crimes but they are still relatively new. If there were more cases of reported hate crimes, this would make society understand that a crime committed because of prejudice is against the law.

Pride Parades in Tirana have always been peaceful, but they have always been centred in the capital and we want to change that. We want LGBTI peoples in other cities to feel safe—the police are a first step, though getting people to understand gender identity, sexual orientation and accepting it in their culture will take time.

What are some of the obstacles faced by the LGBTI community in accessing justice?

Sidita Zaja: We see a lack of trust, and the idea that they would be “outed” by going to the police… this assumption is less true because some police officers have been trained in these matters.

How has the cooperation between Civil Society Organisations and the Albanian police improved with this project?

Sidita Zaja: Before we only had contact with the police in Tirana and now we have contact point in different regions. This is very helpful when it comes to cases from different regions. We have also spent an enormous amount of time with them, connecting more on a personal level. This is very important in the Albanian context, because as a society we work informally. We went to the Netherlands together, had meetings in Tirana, these kinds of interactions and building this network with the police has been the best thing for us in civil society.

They were impressed with the harmony they saw on Pink Saturday and would like to see that in Albania: the cooperation between the LGBTI community, organising NGOs, the police— but also the community at large that came to the event. They liked that kind of harmony and freedom…it gave them hope.”

In addition to improved cooperation with the police, what other changes have you seen?

Sidita Zaja: There has been more awareness raised from different parts of society towards the LGBTI community. There is also an increased capacity amongst police officers for dealing with LGBTI cases.

As mentioned, we thought of the police as a scary institution, now we as civil society have changed our minds when it comes approaching the police. So far, the change is something you can touch and see. There have also been LGBTI community members at the trainings that have met the police and they can tell that things are going in the right direction.

Is there a particular story or experience from these communications that have stayed with you during the project?

Sidita Zaja: During a training on appropriate responses the younger generation police were very honest about how they have reacted to LGBTI cases. One police officer said that it was really good to have these trainings, so that now he knows what the other person goes through. I admired the courage it took to describe things as they really are and to make other colleagues think about it as well.

Another thing is that when we [ProLGBT Albania and representatives of the Albanian Police] were in the Netherlands on Pink Saturday, an LGBTI festival. On a personal level, the police really liked the experience and they found it really admirable how the Dutch police were providing safety and staff. They were impressed with the harmony they saw on Pink Saturday and would like to see that in Albania: the cooperation between the LGBTI community, organising NGOs, the police— but also the community at large that came to the event. They liked that kind of harmony and freedom…it gave them hope.