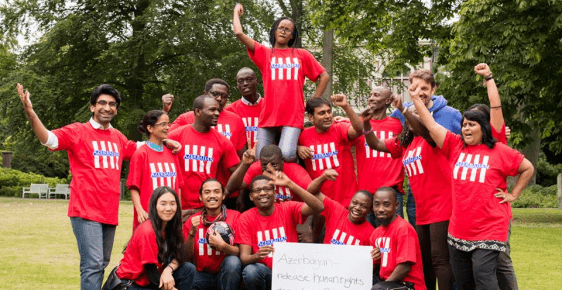 As the first-ever European Games continue, the Netherlands Helsinki Committee, Justice and Peace and human rights defenders from all over the world gathered for a solidarity sports event in the Royal Noordeinde Palace Garden in The Hague on the 20th of June.

The group played football to raise awareness and demand the release of the imprisoned human rights defenders and journalists in Azerbaijan. The participants of the action wore T-shirts highlighting consequences of the repressions against the civil society in the country. “The government of Azerbaijan has invested a lot of efforts in its global marketing campaign, including sponsorship of Atletico de Madrid football team, advertising with the world’s leading media and hosting of the European Games in Baku. However, these actions only created a questionable global publicity due to the continued crackdown on the civil society in the country. Respect of human rights and fair court rulings for Azerbaijan’s prisoners of conscience would be the best way to repair the image of Azerbaijan‬ and demonstrate that it is serious about its international obligations,” – said NHC Deputy Executive Director Jan de Vries.

The participants of the action were human right defenders from, amongst others Burundi, Gambia, India, Kenya, Mongolia, Pakistan, who attended “The Hague Training Course for Human Rights Defenders on Security”. They all face security risks in their own countries due to their human rights work, much like their colleagues in Azerbaijan. They greeted the opportunity to speak out for their Azerbaijani colleagues, as they believed that the international solidarity and pressure is crucial for activists facing security threats and persecution on politically motivated charges. 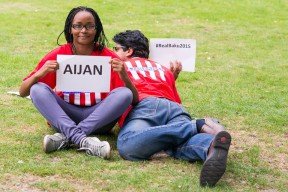 For more information about human rights defenders and journalists detained in Azerbaijan and the recent trails in the cases of Rasul Jafarov and Intigam Aliyev, please download the updated List of Political Prisoners of Azerbaijan, presented by the local civil society and browse the NHC news section. To stay updated, follow the page of the Sport for Right campaign on Facebook.