“We were happy that despite COVID-19, we could still facilitate this very valuable visit and exchange of knowledge between Partners and relevant stakeholders/state representatives in the Western Balkans and the Dutch National Rapporteur and CoMensha.” – Hester van Ommeren, Acting Programme Manager NHC 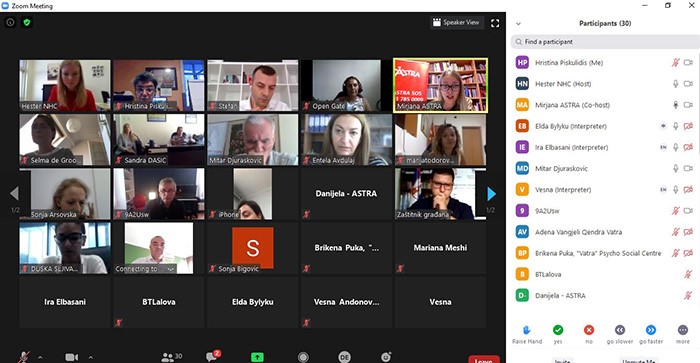 Mr. Bolhaar kicked off the first day of the event and gave an impassioned presentation on the significance and functioning of the institution of the National Rapporteur in the Netherlands. In his presentation, Herman Bolhaar aimed to give insight into the mandate and role of the National Rapporteur, including on monitoring, reporting, policy analysis / recommendations, opportunities and challenges on the issues of trafficking of human beings. Mr. Bolhaar explained that human trafficking should be viewed from a broad perspective, and that both international and local level cooperation are vital in the process of improving victim protection and preventing human trafficking. To enable this process, he emphasized that governmental and non-governmental cooperation is of key importance. “It is important to be on the street, where the problem is happening, because early detection of the problem is very important” Mr. Bolhaar explained. 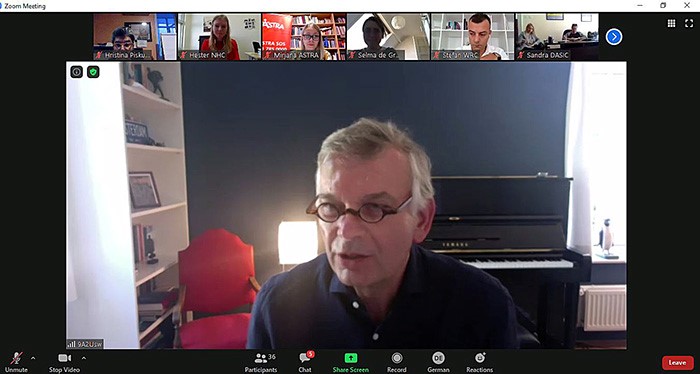 On the second day of the virtual study visit, Brian Varma, manager at National Coordination Centre CoMensha, presented and discussed the work of the centre. He outlined the complementarity of roles of the National Rapporteur and Coordination Centre and elaborated on the division of work and collaboration between different key stakeholders in anti-human trafficking. One of the aspects the counterparts from the Western Balkans were very interested in was data-collection. “Responsible governments liaise with human rights organizations on their own initiative, in order to protect them more effectively” according to Mr. Varma. This collaboration between CoMensha and the governmental institution of the National Rapporteur is an example of the holistic approach to combating of human trafficking, as promoted in the BAN III project.

The NHC, together with the BAN III organizations, enabled this online dialogue between different counterparts from various member states. We aimed to facilitate an exchange of knowledge with and between our partners, in order to provide them with the beginnings of a road map for further action in the coming months.

“Even in these uncertain times, we were able to function within our role as bridge building partner in the Balkans Act Now project” – Hester van Ommeren, NHC.

The ultimate goal of the BAN III project is to ensure the protection of human trafficking victims. To achieve this, BAN III provides mechanisms for regular monitoring of the rights of victims throughout the criminal justice process. It increases victims’ participation in policy development, and it ensures that civil society organizations (CSOs) have the right skills, knowledge and capacity to ensure that the victim’s needs, rights and entitlements are met. The project works with civil society sectors in Serbia, Macedonia, Albania, Montenegro and Bosnia and Herzegovina. Here, it aims to promote systematic monitoring of anti-trafficking policies by establishing a national rapporteur mechanism.

Balkans Act Now! is part of the Netherlands Helsinki Committee’s Access to Justice programme. Access to Justice works for a criminal justice process in which the rights of vulnerable groups are protected. It strengthens capacities of actors in the justice chain, as well as of civil society organisations that assist these groups. By focusing on networking and coalition building, the programme brings together actors that normally do not cooperate.