Today, 20 March 2019, as part of the 125th session of the UN Human Rights Committee in Geneva, a half-day general discussion was held on Article 21 of the International Covenant on Civil and Political Rights (ICCPR). The Article outlines and protects the right to peaceful assembly. The discussion comes in preparation for General Comment (no.37) on Article 21 of the ICCPR. The General Comment will provide appropriate and authoritative guidance to States Parties and other actors on how to ensure full compliance with the right protected under Article 21.

In collaboration with the Moscow Helsinki Group, Kadyr Kasiet (Kazakhstan), Association for Monitoring Equal Rights (Turkey) and Human Rights Club (Azerbaijan), the NHC submitted a written contribution to the general discussion. This written contribution reflects the day-to-day experience of human rights defenders in countries in the region of the Organization for Security and Cooperation in Europe (OSCE).

“This essential human right is regretfully very frequently denied to millions of people across the globe. For many marginalized groups peaceful public protest remains the only way to make themselves heard. Many governments, and this unfortunately includes European governments, take steps to restrict the free exercise of the right to hold peaceful assemblies under the pretexts of ensuring public order or safety, or anti-terroris” – said, Sergey Golubok, NHC Senior Expert, making an oral statement during the discussion at the the Palais Wilson. 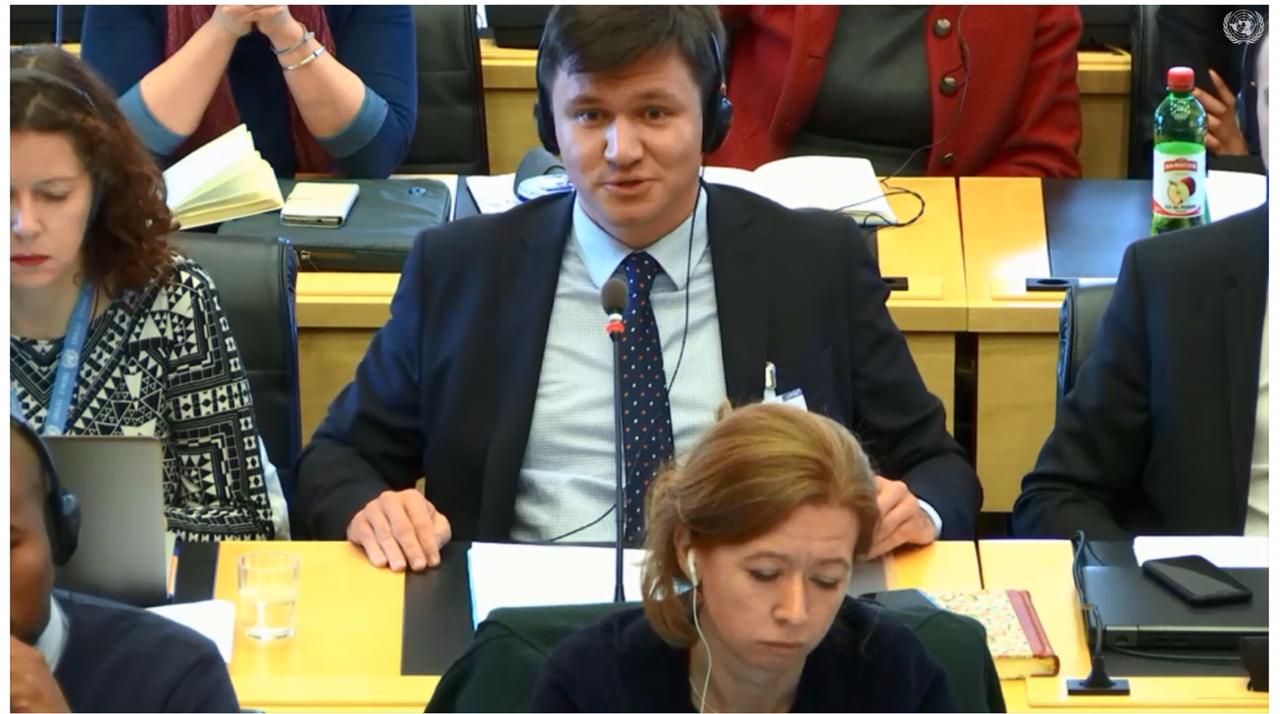 What are the key points of concern raised by the NHC and its partners— referred to as the Coalition for the remainder of this article— in the contribution?

Criminalizing the act of peaceful protest: a dangerous precedent

Recent years have seen a worrying and well documented trend of the criminalization of participation in peaceful protests. Under various pretexts, such as the establishment of onerous notification requirements and even the use of national anti-terrorism legislation, authorities in various countries have criminalized the very right laid out in Article 21 of the ICCPR. Given this context, the Coalition felt it was important to highlight the following points in their written-contribution to the discussions in Geneva.

A failure to comply with the notification requirements associated with peaceful protest is not a justification for the criminalization of individuals or groups. Only if the behaviour of protestors is objectively posing a threat to safety, property, public order and security, should criminalization be considered an option. Public authorities must show a degree of tolerance towards peaceful gatherings, even those ‘unlawful’ ones, which have not respected notification requirements, if the freedom of assembly is not to be deprived of all substance.

For many marginalized groups peaceful public protest remains the only way to make themselves heard.” – Sergey Golubok

Individuals exercising their right to peaceful protest, including organizers or convenors of mass protests, should not be held liable, and above all, not be held criminally responsible, for the actions of third parties at the same protests. This is an important point in light of documented instances in which actors – agents provocateurs – have infiltrated protests in the hope of committing unlawful acts and discrediting protestors. There is no place for the principle of collective responsibility or strict liability in this area of law.

Legislation that targets peaceful protest, either through criminalization or by making peaceful assembly more difficult, is designed to create a “chilling-effect” and to send a clear message to those who dare to speak up in protest. Such legislation must be stopped.

In practice, safe and unhindered exercise of the right to peaceful protest necessarily requires public authorities to facilitate and protect peaceful assembly. As underwritten by the European Court of Human Rights, authorities have a “positive obligation to secure the effective enjoyment” of the right to peaceful assembly. This has numerous implications as authorities must fairly distribute access to, and information about, public spaces, provide protection for protestors and a whole host of practical assistance such as medical services, cleaning services, regulation of traffic etc.

Yet, far from enabling the right to peaceful protest, authorities in some countries have continually justified their prohibition. Along with outright arbitrary bans, there have been instances were protests have been prohibited due to objections from third-parties. For example, in Azerbaijan it is common practice to prevent peaceful assembly with reference to complaints submitted by individuals who live nearby. Public spaces belong to everyone and the right to freedom of assembly cannot be hindered by the actions and beliefs of reluctant authorities or third parties.

The use of force against peaceful protestors

Sadly, the response of authorities to peaceful assemblies in many jurisdictions is that of excessive use of force, inhumane and degrading treatment of protestors, and even instances of torture. Excessive force is used to send a powerful message – part of the “chilling effect” discussed earlier in this piece – to those dissident voices who dare to challenge political elites and exercise their right to peaceful assembly. Viewing the use of force against peaceful protestors from a human rights perspective, it is crucial that police officers and authorities involved in handling peaceful assemblies first regard protestors as individuals carrying out their human right, rather than automatically assume them to be public nuisances.

The Coalition’s written contribution highlighted the following issues. In instances of the use of force against peaceful protestors, it is up to the respective Government to provide persuasive and cogent reasons, justifying the absolute necessity of the intervention in question. Failure to conduct prompt, thorough, impartial and effective investigations into all into all instance of the use of force against peaceful protestors. An independent oversight mechanism should review and report on any large-scale or contentious policing operation relating to public assemblies. When accounts of police brutality, maltreatment or torture at the hands of law-enforcement around assemblies arise during trials, they should be followed up by serious and thorough investigation. Judges and prosecutors should have a clear obligation to refer all relevant incidents that come to their attention to an independent authority with a mandate to investigate them.

The primary objective of most peaceful assemblies, especially those of political nature, is to publicize opinions and to encourage members of the public to join a cause. The media play an important role in this as, especially in the era of social media and 24/7 news, the public rely heavily upon journalists for information about protests, the governments handling of protests and the grievances of those who are exercising their right to assembly. As a consequence, and in an attempt to further discourage peaceful protest, oppressive governments choose to target media coverage of peaceful assembly and protest. This serves a dual purpose for authorities as it both discourages further protest and limits the exposure of dissident ideas.

The Coalition thus stressed, in their written-contribution, the crucial role played by media professionals in informing the general public of peaceful protests and thus their centrality to the right to assembly as outlined in Article 21 of the ICCPR. Any attempt to remove journalists from the scene of demonstrations or to prosecute them for an alleged offence in relation to a demonstration must be subject to strict scrutiny.

The presence of human rights defenders (HRDs) at peaceful assemblies, and their ability to document actions of protestors and law enforcement alike, has been proven to deter human rights violations such as the ill-treatment of protestors. Furthermore, when HRDs are able to assess protests they can then contribute to informed public debate on the legal framework surrounding public assembly, the training needs of law-enforcement officers and whether the state requires further resources to properly facilitate peaceful protests. States should ensure unhindered access of human rights defenders to peaceful assemblies, and their protection.