It’s time to get Smart On Crime: The benefits of probation

The current prison population has reached 11 million worldwide, a record number. No system can handle having so many people behind bars, and the risk of reoffending under the current scheme is high. Which poses the question, is there a way out of this cycle, a better approach to imprisonment geared towards true rehabilitation?

Many countries continue to rely heavily on imprisonment to deliver justice, whereas there is abundant scientific evidence that criminal justice focused on prison paves the way for reoffending once the offender is released. On the contrary, a focus on reintegration of the offender gives the lowest reoffending rates.

The NHC has been working to introduce and develop probation services across Eastern Europe since 2014, currently making great strides in Armenia and together with Center for International Legal Cooperation (CILC) in Serbia, Montenegro and Ukraine. The criminal justice sectors in these countries have recently started their transformation from a punitive perspective on sanctioning to rehabilitative one. Not every criminal justice professional is ready to give up the punitive view that has been the guiding principle for decades, nor is every politician. Therefore, the success of the transformation is for a large part depending on the good understanding of the benefits of probation of those in charge of change.

In order to explain these benefits to decision makers and stakeholders in criminal justice, CILC, the NHC and the University of Applied Sciences Utrecht (HU) commissioned Francis Camstra/tasfilms.nl to jointly produce a video “Get Smart About Crime”. In the video with people who have implemented, studied and lived probation, discuss its benefits. Sharon Dijksma, Mayor of Utrecht; Frank Porporino, Criminal Justice Consultant; Jana Špero, Director General for Prison and Probation in Croatia; Rinus Otte Prosecutor General of the Public Prosecution Service of the Netherlands and John Remmers, ex-offender and Lived-experience practitioner share their thoughts and takeaways related to the implementation of these programmes and show proof that a better approach to justice is not only possible but preferred social and economy-wise.

What are the benefits of probation?

What people don’t understand about incarceration is that it has the least punitive and deterrent effect on the highest risk offenders. Those who are most committed to a criminal lifestyle are the least affected by prison. It is the cost of doing business. Frank Porporino – Criminal Justice Consultant.

It has been proven that imprisonment is not effective at preventing offenders from getting back into committing crime. Incarcerating someone translates into momentary safety, once the conviction is over, the ex-offender goes back to the environment that pushed him or her to commit a crime in the first place. Reintroducing people into society without set strategies and tools for reflection, the ability to get a job of complete their education leads them to take, in most cases, the only path available to them: re-offending. Hence, it is proven that prisons do not change criminal behavior, they just interrupt it for a while.

Probation provides the possibility of not only serving time for crimes but also for the offender to rehabilitate, learn and contribute to their community. Probation allows for judges to evaluate the conditions that they re-insert the ex-offender into and thus help them keep away from criminal activity, in the words of Rinus Otte, Prosecutor General from the Public Prosecution Service of The Netherlands:

The probation system takes a lot off the plates of offender, prosecutors and judges. It advises about what risk factors are present that could make the offender reoffend and what’s necessary to get his life back on track.

For example, Jana Špero, Director General for Prison and Probation in Croatia, shares the story of how ex-offenders contributed to aiding and rebuilding communities in Eastern Croatia after a massive flood, conducting 11.000 hours of community service work. This action had a positive effect on the perception of ex-criminals, reducing the stigma around them and proving to the public that there is an opportunity and clear path towards change for people incarcerated, increasing trust in the overall criminal justice system. 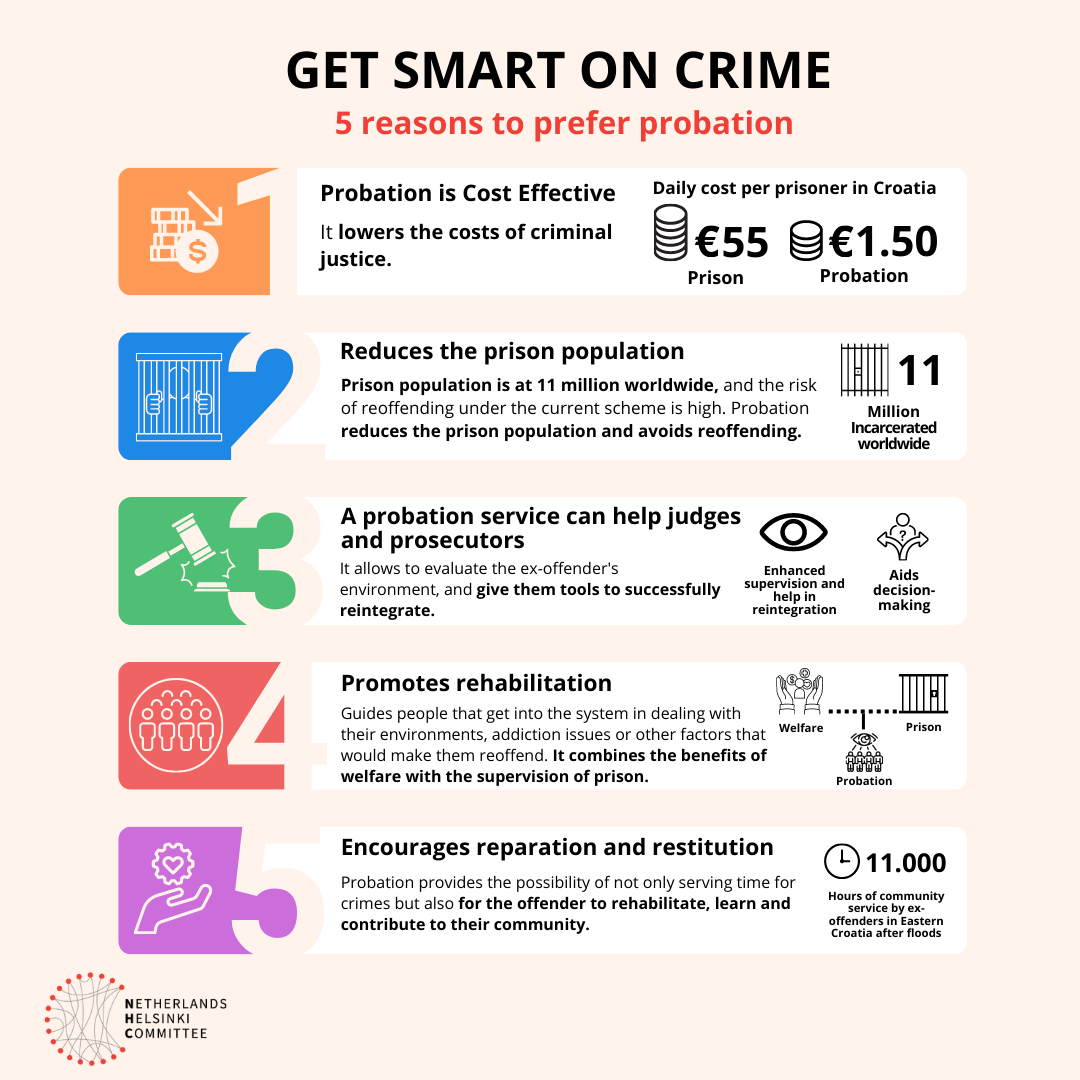 Probation shifts the perception from how can someone be punished for their crimes, to how someone can be rehabilitated and re-integrated into society. Sharon Dijksma, Mayor of Utrecht, defines this service as the “missing key to a safer society”, proving its need and effectiveness. From experiences in Croatia, it has been shown this shift is effective, as it counts with a 90% success rate, as well as being more cost-efficient than prisons. Looking at the numbers, Špero states that the expense in Croatia per day to keep a person in prison is around €55 while in probation, this amounts to €1.50. Therefore, probation does not only provide a better alternative to serving time, but it is also superior when it comes to resource use.

Alongside this, the social impact of probation is shown by the lives changed by these programs. Ex-offenders when they come out of prison often do not count with the emotional, psychological and economic resources to rebuild themselves. Probation combines the support from social welfare programs, with the control from regular imprisonment, while guiding people that get into the system in dealing with their environments, addiction issues or other factors that would make them reoffend.

Taken from a real life experience, John Remmers, an ex-offender who now became a lived-experience practitioner, helping other ex-offenders through the probation system, the “Get Smart on Crime” documentary shows how this second-chance at life allows people to evolve and move forward, creating true change and rehabilitation, an initiative that helps communities, reduces stigma and lowers the overall criminal population. In the words of Remmers:

When I help people get a job and enroll into studies I think “yes, another one made it out!”

From being tough on crime to being smart on crime

The main takeaway from the discussions held with these involved stakeholders is that it is not about being tough on crime, as it was thought in the past. Imposing long and arduous sentences or the harshest punishments possible does not lead to increased safety, therefore, there is a need to change people’s perceptions on prison and prisoners, remind them that these people still have possibility to change if they are provided with the proven effective tools to allow for that to happen. Rinus Otte, Prosecutor General from the Public Prosecution Service of The Netherlands states that:

The public claims that punishments are not hard enough, they claim that prison is like a hotel, so we are always fighting an uphill battle.

Without true rehabilitation there is not fight on crime possible. From the Prison Reform Programme the NHC aims to shift the perceptions of the general public, judges and others involved in the criminal justice system towards rehabilitation, instead of imprisonment, while prompting a true needed change to the overall justice system. Frank Porporino, summarizes the importance of this programme in one short statement:

Of course public safety should be a priority, but to get tough on crime without being smart about the way we do it is a fool’s path. You are asking for short term safety but not long term safety. (…) When we are choosing prison over probation we are choosing a more expensive choice that is less effective, that’s not smart social policy, is actually pretty dumb.

The video is supported by a brochure, produced by the HU, CILC and NHC, in close collaboration with the Confederation of European Probation (CEP). Next to explaining why probation works and what its benefits are, this 40-page document gives an overview how it can be introduced best as a new element in a criminal justice system, based on the experience and best practices from other countries that have built up their probation system in the past two decades. Therefore, it is designed as a useful tool for justice ministers, politicians and senior civil servants interested in setting up or upgrading a probation service.

Check out our brochure in collaboration with the University of Applied Sciences Utrecht (HU), CILC and the Confederation of European Probation (CEP) about the benefits of probation. A must read when understanding the advantages of implementing this system.

About our Criminal Justice Reform Programme

We believe a criminal justice system focused on rehabilitation rather than punishment is better at contributing to safer societies. The Criminal Justice Programme promotes and supports criminal justice reform that works to ensure offenders are able to successfully re-enter society and do not re- offend. By providing tools and trainings to prison staff or probation officers, we help improve the implementation of justice. By bringing together high-level officials, policy experts, and seasoned practitioners from different countries, we contribute to the development of the most effective policies and practices. We also promote collaboration between different actors in the justice system, such as judges, prosecutors, probation, prison, and civil society organisations to ensure reforms pursued are effectively implemented throughout the entire system.