On 10 November 2022 the ‘Democracy Under Threat’ Conference was held at the Diligentia Theatre in The Hague. The conference was supported by The Netherlands Helsinki Committee, Foundation Max van der Stoel, Pax for Peace, Meer Democratie, Transparency International Nederland, The Hague Academy for Local Governance, Agora Europe and Defend Democracy. 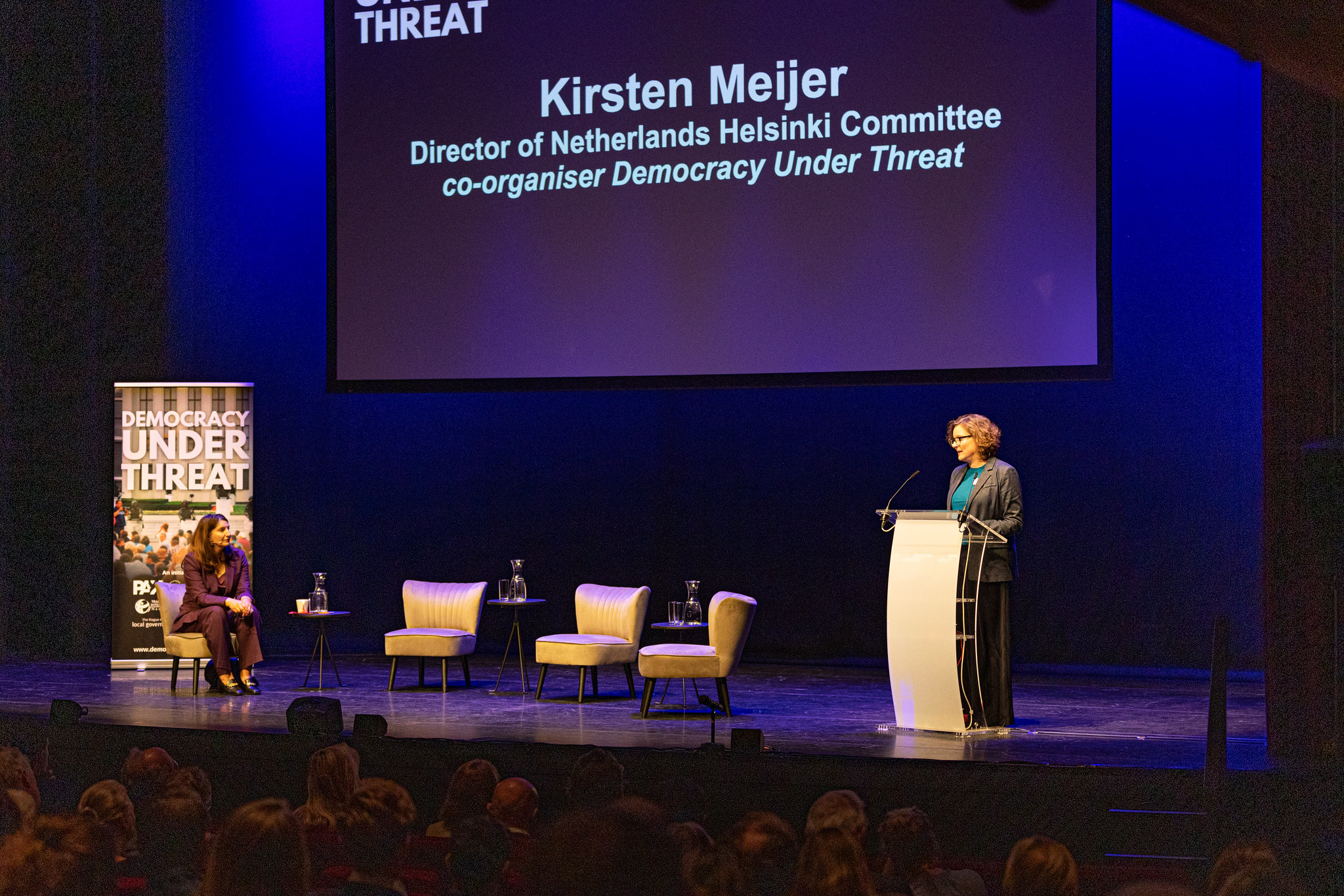 Kirsten Meijer, Executive Director of the Netherlands Helsinki Committee (NHC), and longstanding partner of the NHC, Márta Pardavi (co-chair of the Hungarian Helsinki Committee), , were among the speakers to open the conference. Meijer underlined the sense of urgency that united attendees of the conference in the face of global trends in democratic backsliding and Pardavi emphasized the need for civil society organisations to cooperate transnationally in order to reverse these trends. Pardavi also highlighted the need to maintain the ‘four engines of democracy’: free elections, media freedom, a strong civil society, and the rule of law. Speaking on the importance of the rule of law to the democratic values in Europe, she had this to say:

“If we don’t have a common understanding of these issues then I don’t think we have a European Union.”

At multiple stages during the conference, the case was made that new tools are needed to maintain the engines of democracy. One such concept, that of citizens’ assemblies, was discussed as a way to crowdsource democratic decision making. A citizens’ assembly is a randomly selected group of citizens’ that is convened to discuss and decide a particular issue. The group is stratified by factors such as age and gender to ensure representation. In theory, citizens assemblies could address any moral or social dilemmas on the national, regional, or municipal level and many conference attendees recognised its potential:

“I think it could be implemented in Serbia and other countries…this citizen’s assembly is super interesting,”

Another key issue tackled at the conference was the importance of media freedom to a democratic system. Ilir Iseni, Deputy Director of the Academy for Judges and Public Prosecutors in North Macedonia, discussed the importance of the Netherlands Helsinki Committee’s efforts to strengthen relations between the media and the judiciary in the Western Balkans. In relation to a conference on media freedom, which the NHC organised in Belgrade this October, Iseni said:

“we need [the NHC] to organize such events continuously and so that, at the end of the day, judges and the judiciary on one hand and journalists and the media on the other hand are not enemies. They are friends that are working for the same cause, which is the public interest.”

Stankovic and Iseni were among 16 participants in the NHC-facilitated Rule of Law training for senior civil servants from across wider Europe. The training spanned three days, including the conference on November 10.

The ongoing invasion of Ukraine was omnipresent throughout the day of the conference. Nataliya Drozd, head of Ukrainian nongovernmental organization Dobrochyn, explained how decentralisation was crucial to Ukraine’s resistance against the invasion because it empowered local committees. A policy of decentralisation was adopted following the Maidan protest in Ukraine in 2014, resulting in a more democratic society. Olena Miliienko, Director of the National School of Judges in Ukraine and participant in the NHC’s Rule of Law training, had this to say on the topic

“Before the war Ukraine was on its way to becoming a very democratic country…Maidan showed us that we really can change something if we want.”

The importance of involving local communities in the reconstruction of Ukraine is recognised in point 12 of the Democracy Under Threat’s manifest, which advocates for citizen-centered, bottom-up and inclusive reconstruction programs for Ukraine.

Rule of Law as a critical factor for democracy 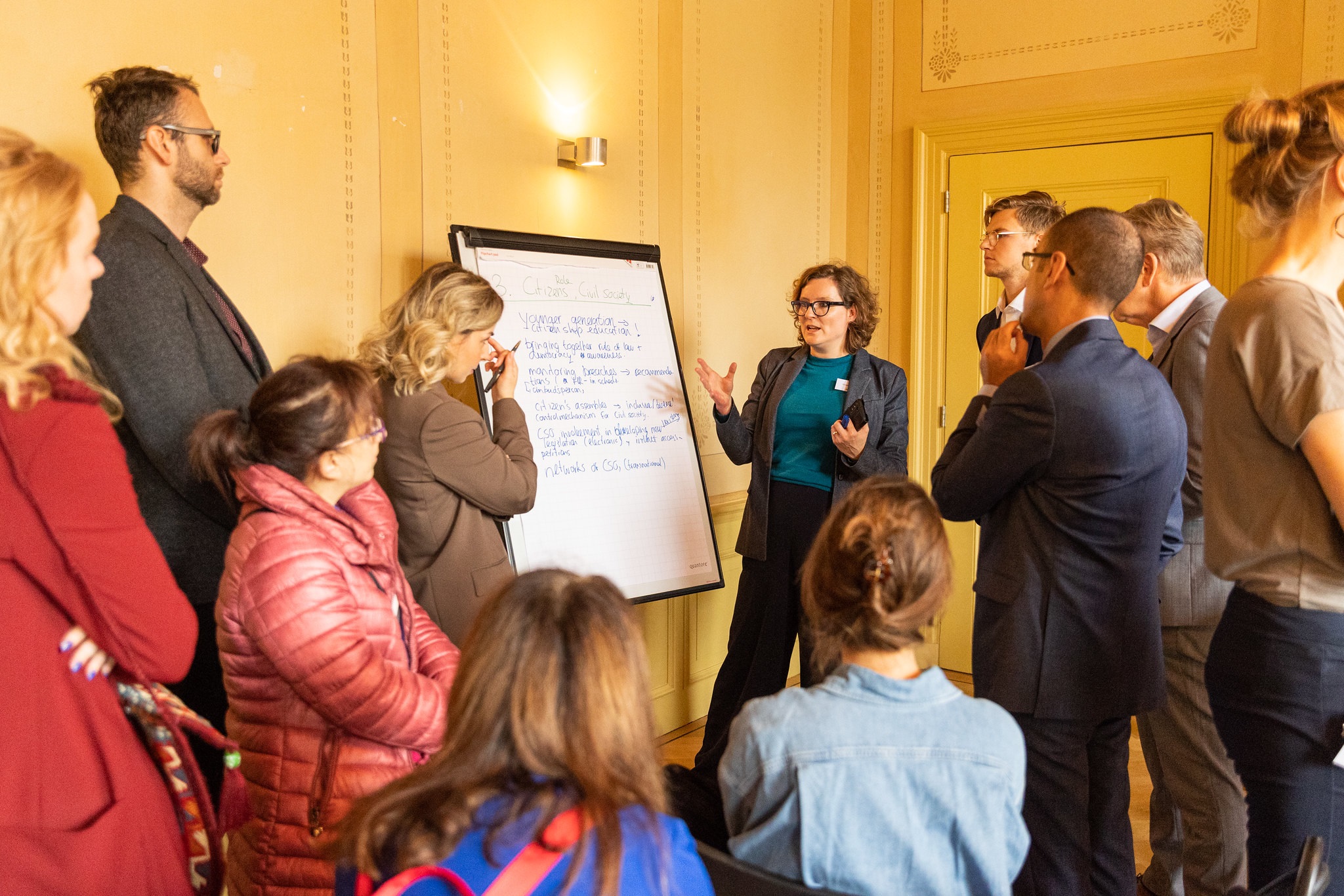 The focus on Rule of Law as a cornerstone of democracy was also evident in the manifesto (see points 4, but also 8, 11 and 14), and was the theme of the NHC’s afternoon workshop. With contributions from Márta Pardavi, Tamara Trotman (judge at the Court of Appeal in The Hague and lecturer at the Training and Study Centre for the Judiciary, and NHC supervisory board member) and Elbrich Algra, Coordinator Central Europe team at Ministry of Foreign Affairs Netherlands, participants focused on three key issues:

It was noted that without a strong and resilient civil society, Rule of Law is not rooted in society, and backsliding is much more difficult to prevent. Participants agreed that while country specific strategies are necessary, there should not be any compromise on the fundamental principles of Rule of Law. As Pardavi noted;

“I very much disagree that Rule of Law standards should be more relaxed [for instance in Hungary] simply because there has been a relatively short time for these countries, in their context, to catch up. The standards are very clear. When it comes to implementation, sure you can’t expect a country that has just come out of a dictatorship for example to be already at the level of a country that has hundreds of years of relative peace and prosperity. Addressing this warrants more support, and possible geographic tailoring of certain support programmes. But…judicial independence should not mean something different in the Netherlands as it does in Hungary or Poland – the only difference is the way to assist with the realisation of the same goal & standard.”

The Rule of Law workshop participants also focused on the need for better communication from the judiciary, and used the “Tour de Konstytucja” ran by Polish judges in 2021 as prime example of communication to and engagement with citizens done well. As noted, no change is possible if there is no pressure from below, and the only way to ensure this pressure occurs is through engaging citizens though debate and education – as again evident from the Manifesto.

Democracy Manifesto – Our Call for Action

The manifest entitled “Democracy Manifesto – Our Call for Action!”, in which the organiser of the conference presented 14 key recommendations on how to improve democracy at home and abroad, was crafted based on the discussions that were held throughout the day. The recommendations will be the Netherlands civil society’s contribution to the Dutch input at the Second Summit for Democracy in Spring 2023. The manifest was presented to Dutch government representatives Thomas Zandstra (Head of Democracy department at the Dutch Ministry of the Interior and Kingdom Affairs) and Dr. Bahia Tahzib-Lie (Human Rights Ambassador at the Dutch Ministry of Foreign Affairs) at the closing of the conference. 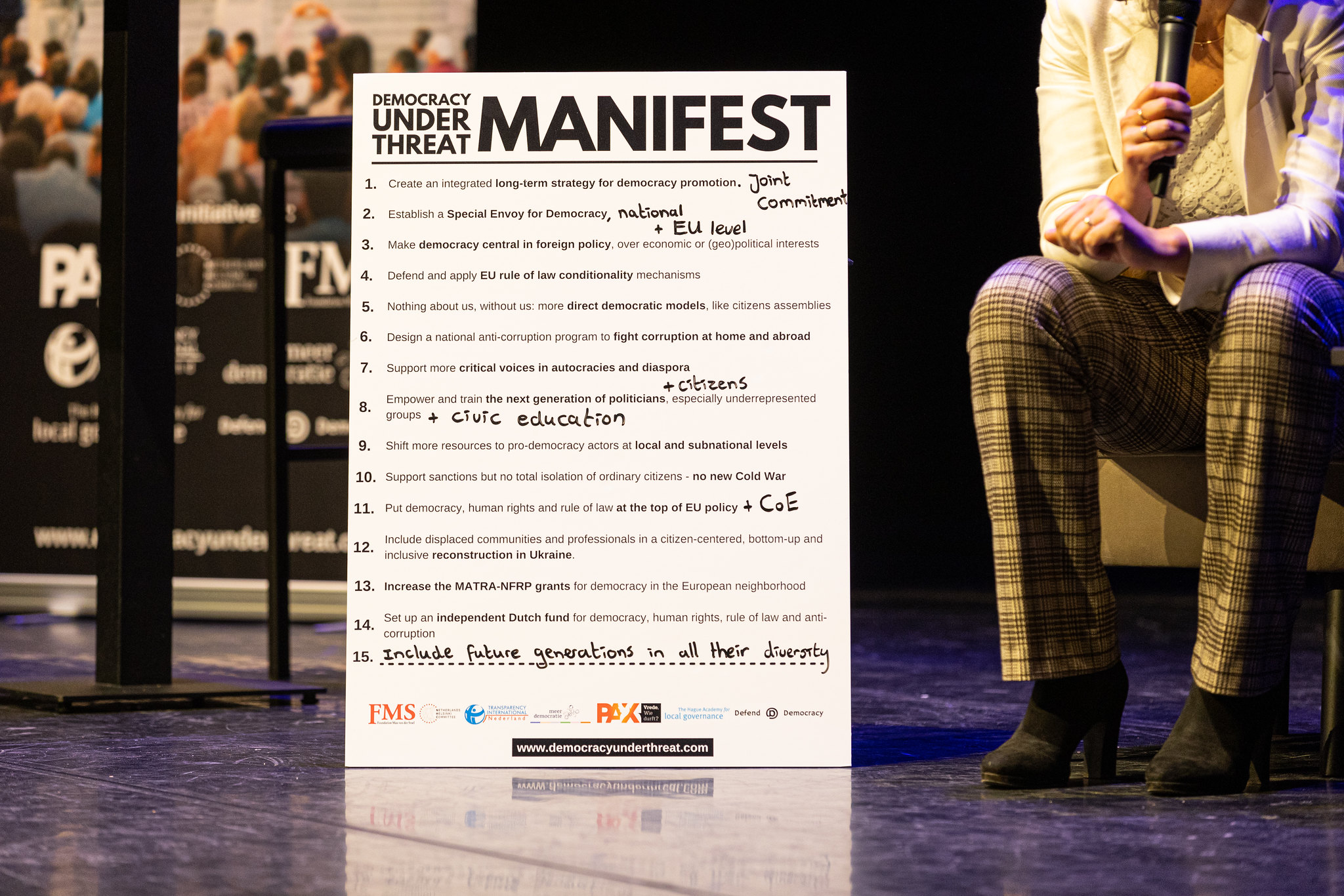