Raci Bilici, a human rights defender from Diyarbakır, is under investigation in Turkey. Bilici faces up to 15 years imprisonment for his legitimate human rights work with the Human Rights Association (İHD) in the country’s volatile Southeast. Sustained attention and a proactive strategy by the EU and its Member States is needed to defend Bilici, and other human rights defenders in Turkey, from further criminalisation and reprisals for their work.

The portrayal of Bilici’s situation is a continuation of the series, “Defending Human Rights in Turkey: Stories that Need to Be Heard,” told by Tan Tunali, with illustrations by Marco Lambooij. 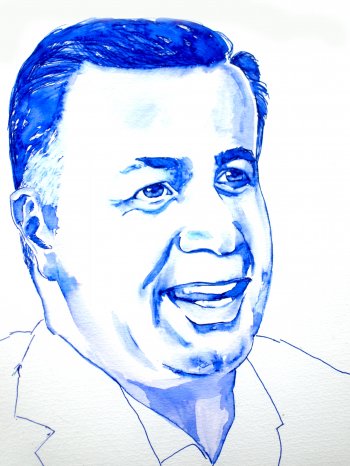 A water-colour depiction of Raci Bilici

Born in 1972, Raci Bilici’s professional life has known many ups and downs. But there has always been one clear constant: persecution by the Turkish state. Growing up in a village near the Kurdish metropolis Diyarbakır, Bilici’s story mirrors the history of the decade-long violent conflict between the Kurdistan Workers’ Party (PKK) and the Turkish state.

His birthplace was one of the thousands of Kurdish villages razed to the ground during the Turkish state’s fight against the PKK in the 1990s, which saw the government employ a scorched earth policy. Like thousands of others, his family took refuge Diyarbakır, where Bilici studied at Dicle University. As a politically active student, he faced repression and the wrath of nationalistic state policies from the start. After university, he started working as a mathematics teacher at a high school, a job he truly loved. However, his continued political activism and vocal opposition to the ongoing violent conflict in the region put him in the crosshairs of the Turkish state. At one point, Bilici was thrown into prison for 16 days and tortured.

Upon being released from prison, Bilici was declared unfit for public office by a Turkish court and banned from teaching at state schools. He started teaching at a private dershane (tutoring school) where the ban did not apply. However, continuous political and financial pressure took its toll on Bilici and his family. The stress and precarious nature of his situation meant that Bilici had to take a step back from his activism.

Pressure from the state, both in his educational and human rights work, is something that Bilici is as used to as the air he breaths.”

In 2004, when pressure and state repression had eased due to wide-ranging reform process linked to Turkey’s aspiration to join the EU, Bilici started to become active in the local Human Rights Association (İnsan Hakları Derneği – İHD), an organisation founded in 1986 with the aim of promoting human rights and democracy in Turkey. İHD is the largest grassroots human rights group in Turkey. It conducts research and educational events, monitors and documents human rights violations, including abuse that occurs in the context of armed conflict. Bilici has since taken up several different roles for the organisation: volunteer, Chairperson of the Diyarbakır branch between 2012 and 2018, and national Vice-Chairperson of the organization between 2016 and 2018.

Pressure from the state, both in his educational and human rights work, is something that Bilici is as used to as the air he breaths. “The only thing that changes is that sometimes it is more severe than at other times,” he said, looking back at the years he has been active in Turkey’s human rights struggle. His story reminds us that, contrary to what is often assumed abroad, repressive politics in Turkey did not start with the autocratic rule of the current President Recep Tayyip Erdoğan.

The peace process between the Turkish state and the PKK broke down in 2015 and violence and political repression have consequently returned to the predominately Kurdish southeast of the country. Turkish security forces, faced with entrenched PKK positions and mines, have used tanks and heavy artillery against the PKK in several cities. The violent clashes turned entire neighbourhoods to rubble and displaced more than half a million people across the region.

Repression has only increased following the failed coup of July 15, 2016. Tens of thousands were dismissed from their jobs via emergency decree, hundreds of media organizations and NGOs were simply shut down, many of which had promoted minority rights.”

On November 28, 2015, prominent human rights lawyer Tahir Elçi was shot and killed while giving a press conference in the historical center of Diyarbakır. The murder came as a shock to Bilici. “We had worked together every day,” Bilici said about Elçi. To this day, no progress has been made in the investigation into the murder of the human rights lawyer, and the Turkish government is accused of wilfully stalling it.

Repression has only increased following the coup attempt of July 15, 2016. Tens of thousands were dismissed from their jobs via emergency decree, hundreds of media organisations and NGOs were simply shut down, many of which had promoted minority rights. State administrators were appointed to all Kurdish-run municipalities.

Like many of his colleagues in the human rights community, Bilici lost his teaching job due to an emergency decree, a job he had returned to in 2008. Many colleagues were imprisoned or left the country. This time, the government’s actions spelled the definitive end of his career as an educator. In addition to losing his job, Bilici faced a criminal investigation for alleged membership of a terrorist organization and spent a week in pre-trial detention. The investigation against him continues and he may face up to 15 years in prison if convicted. Pro-government media has led a smear campaign against him, casting him as an enemy of the Turkish state and people.

Unable to pursue his job as a teacher, Bilici has started to study law and is currently a trainee attorney at a law firm. It is unclear whether he will be able to get a license to practice as a lawyer. Bilici says that the Ministry of Interior Affairs has become highly politicised and he fears that he might be denied his license due to his human rights work.

Regardless of the pressure and the risk associated with his work, Bilici, like many other HRDs in Turkey, remains steadfast in his beliefs, “People can lead a dignified life if they have the opportunity to claim their individual and collective rights. We are being persecuted for demanding our rights, but we continue to do so and to call for peace and democracy,” said Bilci.

Find the whole series here: Defending Human Rights in Turkey: Stories that Need to Be Heard

UPDATE: On 12 March 2020, Raci Bilici was sentenced to 6 years and 3 months in prison on charges of “being a member of a terrorist organization.” The case is currently being reviewed by a regional court.