100 Days of Protests in Bulgaria

Joeri Buhrer Tavanier, the NHC’s Integrity and Accountability Programme Manager, was quoted in the French newspaper “Le Monde” on the ongoing demonstrations in Bulgaria. Every night for the past three months, hundreds if not thousands of protesters have gathered near the seat of the Bulgarian government, presidency and parliament in Sofia. October 16 will mark the hundredth day of mobilization of these protesters. The protesters demand the resignation of Prime Minister Boyko Borissov and Prosecutor General Ivan Geshev.

Despite the widespread demonstrations, consistent political turmoil and corruption crisis in Bulgaria, the EU has failed to respond. “It is necessary to put Bulgaria on the same level as Hungary of Poland,” claims Hristo Ivanov, party leader of Yes, Bulgaria!. Buhrer Tavanier, who was the European Commission’s envoy on rule of law issues in Bulgaria until 2018, criticizes the European Commission for having no political will to fight corruption. “Bulgaria meets all the conditions to be qualified as a captured state, but as Borissov is a member of the main European political party, that of Angela Merkel [the EPP], and nobody wants to have a problem in addition to Hungary or Poland, Jean-Claude Juncker has never asked for concrete results,” he said. 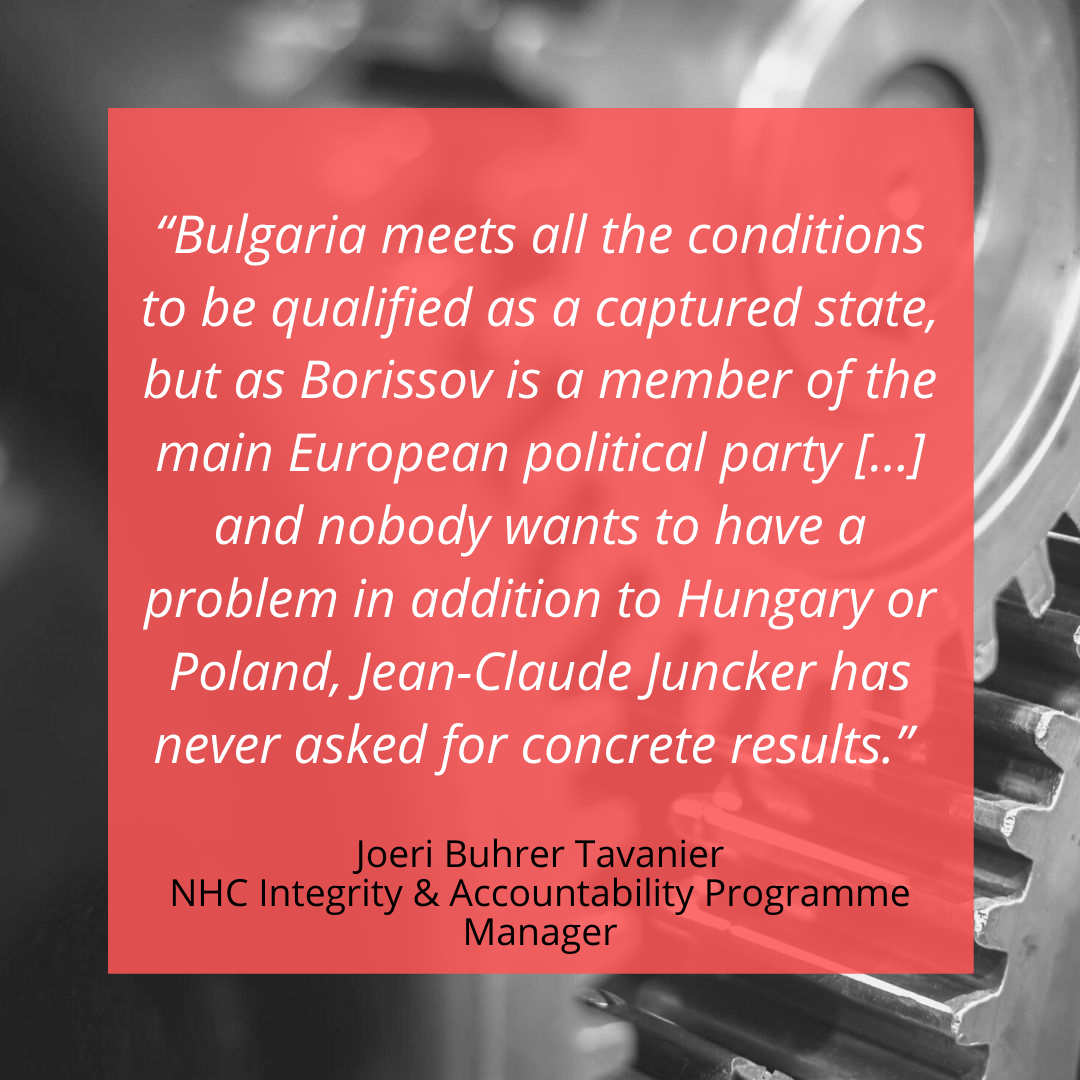 Buhrer Tavanier is also quoted in a follow-up article, which addresses the struggle between Lozan Panov, head of the Supreme Court of Cassation in Bulgaria, and Ivan Geshev, Bulgaria’s Prosecutor General. Panov openly sided with the demonstrators that demanded the resignation of Ivan Geshev. To those who might think that this is nothing more than a quarrel between two magistrates, Buhrer Tavanier reminds us of the difference: “Panov fights for transparency, while the Prosecutor General attacks those who ask him questions, accusing them of being mafia or foreign-funded. Gershev turns a blind eye to the people in power while he spends his time sending the police to journalists and critical NGOs, a classic method of intimidation”.

The entire article (in French) can be read here.

Earlier this year, Buhrer Tavanier was also interviewed by NPO Radio 1 about the protests in Bulgaria. You can listen to the interview (in Dutch) here.