The first quarterly monitoring report on the pressure and persecution faced by activists in Ukraine covers the period of January-March 2020. Produced by ZMINA Human Rights Centre, in partnership with the Netherlands Helsinki Committee, and with the financial support of the European Union, this first report assesses new incidents and newly discovered circumstances in older cases of attacks against human rights defenders.

The report considers a variety of attempts that have been made to obstruct the activities of activists working to promote and protect human rights. These include physical attacks, violations of the rights of association, free speech, and peaceful assembly; damaging property and violating privacy; discrediting and smear campaigns; and cases of politically motivated legal prosecution. In the period covered by the report, 23 incidents were registered in the territory controlled by the Ukrainian government, most taking place in Kyiv and the most common incident being physical. 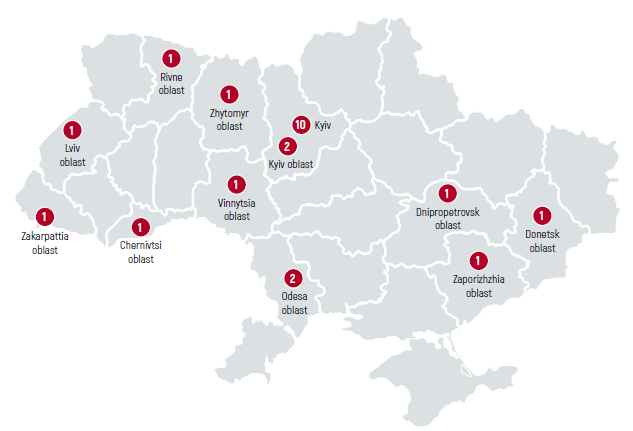 Given the global COVID-19 pandemic that has significantly marked 2020, the first report observed and evaluated the effects of related measures undertaken in the country. The gradual intensification of measures to counteract the spread of the coronavirus has raised questions about whether the measures are proportional to the goal of reducing the number of infections and being able to treat those already infected.

The report also highlights the spread of a disturbing trend already experienced in other European countries of accusing philanthropist George Soros of trying to sow discord in the country. While initially only civil society organisations directly linked with the philanthropist were negatively labelled Sorosiata (Soros Kids), the term is now widely used by politicians and media outlets to discredit any civil society organisation seeking reform. Such discrediting statements create a distorted image of activism and undermine trust in these organisations. Previous examples of this trend in Hungary and Russia show that such stigmatisation of activism and human rights activities can evolve into excessive restriction of the activities of civil society organisations and negatively influence any prospect for positive reform.

Such discrediting statements create a distorted image of activism and undermine trust in these organisations.”

The report also notes concerns raised by civil society in March 2020 about the appointment of the new Head of the Prosecutor General’s Office—a controversial figure who was the former director of the State Investigation Bureau (SIB). Families and attorneys of the victims of the 2014 “Euromaidan” revolution believe that there is a conflict of interest due to her previous role at the SIB which could negatively impact the objective and effective investigation of related cases. Lastly, the report looks at four new draft bills on the legal regulation of lobby activities which may threaten the activities of NGOs and individual activists. The bills foresee high fines in cases of non-compliance, however, they lack clear and full mechanisms for the imposition of such fines and thus carry the risk of misuse.

The report on the trends and individual cases of persecution of human rights defenders and activists in Ukraine can be found here: