The Netherlands Helsinki Committee (NHC) strongly condemns the prison sentences handed down on 3 July 2020 against four human rights defenders in Turkey on grounds of “aiding and abetting a terrorist organisation without being a member thereof” or “membership of a terrorist organisation.” Taner Kılıç (honorary president of Amnesty Turkey) was sentenced to 6 years and 3 months, and Günal Kurşun (lawyer and Human Rights Agenda Association), İdil Eser (Amnesty Turkey), and Özlem Dalkıran (Helsinki Citizens’ Assembly) each received sentences of 1 year and 13 months.

The defendants were on trial as part of a case known as the “Istanbul 10” trial against 11 human rights defenders. 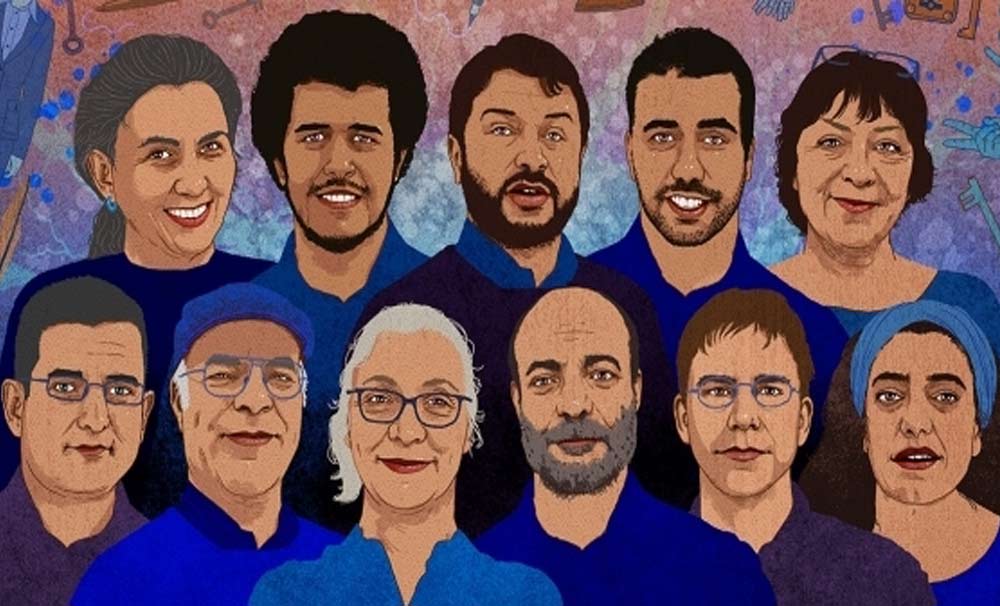 The decision to arrest, detain, and prosecute these human rights defenders for their attendance of a meeting is a clear attack against their legitimate and peaceful work to uphold fundamental freedoms.”

The entire case, including the earlier detention of nine of the 11 defendants, had already raised serious concerns about violations of the basic tenets of a number of international human rights and law treaties to which Turkey is party. The verdict and sentencing set a dangerous precedent for pending and any possible future trials against human rights defenders in Turkey. In reality, this trial and the resulting verdicts goes far beyond the 11 human rights defenders who were prosecuted, but represents an indictment of Turkey’s human rights community as a whole.

As of writing, the four human rights defenders who have been convicted have not been detained. An appeal will be lodged to the regional court, and the NHC will continue to call for the norms set by international standards to be respected throughout the appeal procedure, and that all charges be dropped. 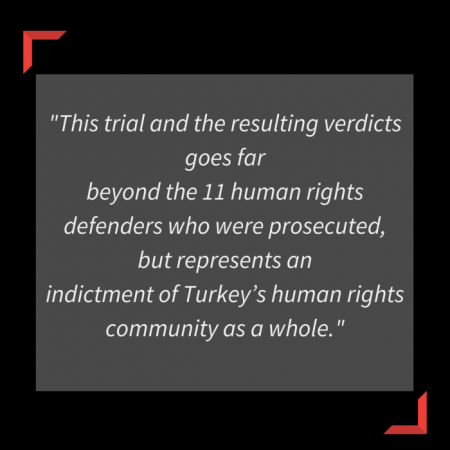 On 5 July 2017, ten human rights defenders were taken into custody while attending a training on “digital security and protection of human rights defenders” on Büyükada Island off the coast of Istanbul, Turkey. The group consisted of eight representatives of civil society organisations in Turkey and two non-Turkish trainers. Those taken into custody were not given access to legal counsel for more than a day, and their lawyers were only informed about the detention process 30 hours after the police raid. While two of the accused were released on probation, the remaining six were subsequently detained for 113 days. Despite being in jail at the time of the training, the case of Taner Kılıç—a lawyer, former Director, and now, honorary president of Amnesty Turkey, was merged with that of the “Istanbul 10,” based merely on “close contact” with one of the “Istanbul 10” detainees—a fellow colleague at Amnesty Turkey. Kılıç was only released from pre-trial detention after 14 months in jail.

On 27 November 2019, the Prosecutor requested acquittal for five defendants, including the two non-Turkish trainers, and imprisonment for up to 15 years for six of the defendants. Kılıç was accused of “membership of a terrorist organisation,” while Nejat Taştan (Association for Monitoring Equal Rights), Günal Kurşun (lawyer and Human Rights Agenda Association), İdil Eser (Amnesty Turkey), Özlem Dalkıran (Helsinki Citizens’ Assembly), and Veli Acu (Human Rights Agenda Association) were each accused of “aiding and abetting a terrorist organisation without being a member thereof.” All six were also accused of abetting terrorists through their organisations’ activities. Disregarding all counter evidence presented by the attorneys of the eleven defendants, the Prosecutor erroneously claimed that the 2017 training was instead a meeting bringing together supporters of three groups recognized as terrorist organisations: Fetullah Gülen Movement/Parallel State Structure (FETÖ/PDY), Kurdistan Workers’ Party (PKK/KCK), and The Revolutionary People’s Liberation Party-Front (DHKP-C).

The trial had originally been set to conclude on 19 February 2020, however upon defence request, a resumed hearing was scheduled for 3 April 2020. Due to the COVID-19 crisis, this resumed final hearing, was subsequently postponed to 3 July 2020.

NHC uses innovative advocacy to promote the safeguarding of human rights, using channels that are not primarily designed for this purpose. Together with partner organizations in specific projects, the NHC engages in lobby and advocacy activities towards intergovernmental organizations such as the Council of Europe, the OSCE and the EU, governments or government agencies.