Nejat Taştan has been defending human rights in Turkey for over thirty years. Currently focusing on upholding the rights of vulnerable groups, he is one of the Istanbul 10—a group of human rights defenders taken into custody during a digital security training in 2017. The group is being prosecuted under Turkish Anti-terrorism legislation. Sustained attention and a proactive strategy by the EU, its Member States, and the international community as a whole is needed to defend Nejat Taştan and other human rights defenders and journalists in Turkey from further reprisals and unfounded litigation for their work.

The portrayal of Nejat’s experiences is a continuation of the series “Defending Human Rights in Turkey: Stories that Need to Be Heard,” told by Tan Tunali, with illustrations by Marco Lambooij. 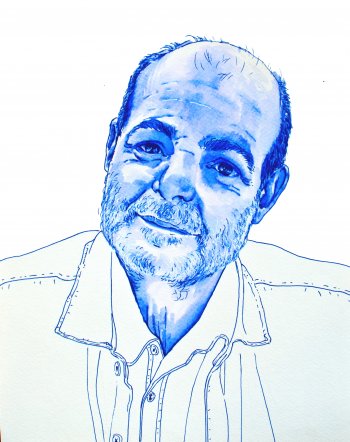 A water-colour depiction of Nejat Taştan

“I will now tell you how I became a ‘terrorist’,” Nejat Taştan joked during a panel discussion on the impact of counter-terrorism measures on human rights which took place September 2019 in The Hague. During the panel, Taştan spoke about the baseless terrorism charges for which he and his colleagues will stand trial on 27 November 2019. They face up to fifteen years in prison if they are found guilty of “aiding an armed terrorist organisation.”

Nejat Taştan’s story dates back to 5 July 2017 when police raided a hotel on the island of Büyükada, near Istanbul, where Taştan and nine other human rights defenders were attending a digital security workshop. After being taken into custody, government-controlled media alleged that the participants were planning a repeat of the 2016 attempted coup, and that they were operating as agents for foreign powers. “We had become used to being painted as terrorist supporters, but it was a first for civil society members to be accused of being operatives of a foreign government,” Taştan said.

Following the panel discussion Taştan noted that he is tired of talking about his case. Taştan, along with lawyer Şeyhmus Özbekli, were released on bail as part of the group that has become internationally known as the ‘Istanbul 10.’ As one of only two who were released, Taştan gave many interviews in an attempt to raise awareness for his colleagues who remained behind bars. A frequently-used quote at the time sums up this drive: “Why am I free while they aren’t?” After mounting international pressure, the others were eventually released, having spent an additional 113 days in jail; however, the case against them remains open.

I could be prosecuted for anything I do. The same goes for jurists, journalists or other human rights defenders. We are all subjected to the extreme arbitrariness of the system,” – Nejat Taştan

As we continued our conversation in front of St. James’ Church, Taştan’s eyes lit up the moment the conversation moved beyond his trial and he started talking about his work. He has been active in the human rights community for over thirty years and is full of stories gathered throughout the decades. Taştan has worked for a wide range of organisations and has run projects focusing on a variety of rights issues. He was among the founding members of the Human Rights Foundation of Turkey (Türkiye İnsan Hakları Vakfı – TİHV) (whose current Chair, Şebnem Korur Fincancı, was featured in this series previously) and has held several roles in the Human Rights Association (İnsan Hakları Derneği –İHD). Most recently, Taştan founded the Association for Monitoring Equal Rights (Eşit Haklar İçin İzleme Derneği – ESHİD), and currently works as the Coordinator of the organisation.

His experience defending human rights over the years has taught him many things along the way. “When I started in the 1980s, I believed rights had to be protected, of course, but I did not know how to systematically address these issues. One of the most important things I learned is not to be subjective,” he said. Taştan explained that coming from a Marxist background, he initially perceived human rights as something ‘bourgeois’ and ‘elitist.’ “But through my work I came to understand how important they are and how they should be upheld in an objective way. Now my old friends joke that I have become a liberal,” Taştan laughed.

We fought the regime of the 1980 coup exactly the same way as we are fighting the current regime,” – Nejat Taştan

Over the years, Taştan has seen a lot of change in Turkey. “It all goes in waves. There were times when it seemed to get better, but now I understand that we have actually not made much progress,” Taştan concluded. In 1983, when Taştan moved from his hometown Adıyaman in the southeast to the capital, Ankara, to study, the repressive aftermath of the 1980 coup could still be felt everywhere in Turkey. For Taştan, the political orientation of the ruling party did not matter in his work. “We fought the regime of the 1980 coup exactly the same way as we are fighting the current regime,” he said, explaining that his human rights work is not supposed to support or oppose any particular political party; instead, it aims to defend everyone’s rights.

Rights defenders usually do not like to compare different eras of Turkish history, they tend to avoid singling out specific eras as particularly bad, because for them all rights violations are unacceptable. But Taştan wanted to stress one important point which sets these last years apart from the past: Turkey’s state institutions no longer respect their own laws. “Before, there was a sense of what to expect in a judicial process. If you would say X, you would be prosecuted by law Y. That is no longer the case: I could be prosecuted for anything I do. The same goes for jurists, journalists or other human rights defenders. We are all subjected to the extreme arbitrariness of the system,” he said.

Taştan contracted polio at the age of one, which has caused him to walk with difficulty throughout his life. Describing his belief about how human rights work should operate, he said, “Whenever the topic of disability rights [in the context of human rights discussions] comes up, people look at me. But I would always try to avoid speaking on the matter. That is because I believe that you do not have to be the ‘owner’ of a problem to defend it. That is how human rights work for me.”

I gave thirty years of my life [to this cause], if I would go somewhere else, I would not be happy. And besides, so many people are putting in so much effort to build a better future, we must be able to change something, right? It only fuels my motivation.” – Nejat Taştan

When asked about which topics within human rights work he has worked on the most, he listed discrimination and land mines’ victims. Despite his wariness to focus on disability rights earlier in his career, the topic found him after all, he joked. His organisation, ESHİD, has undertaken a project to tackle the obstacles people with disabilities face in accessing justice. Taştan stressed that people with disabilities are part of a larger group of disadvantaged people who are discriminated against, and struggle accessing their rights. Taştan sees discrimination as one of the most important topics human rights defenders can tackle in Turkey because discriminatory practices are deeply ingrained in society. Sharing an example, he mentioned, “One of the first things Alevi children are taught is: do not tell anyone that you are Alevi outside our home.” Another topic close to his heart are the victims of land mines. In the southeast of the country, where the conflict between the Kurdish Workers’ Party (PKK) and the Turkish state is centred, unregistered land mines have been a major issue, claiming countless lives, “sometimes in people’s own gardens,” he explained. He has dedicated a large part of his career to assisting victims of land mines to access justice.

Taştan said that his work, besides the obvious risks, could be emotionally draining and even traumatising at times. He shared one anecdote about going to the Iranian border town of Şemdinli to investigate the bombing of the Umut Bookshop in 2005, during which the owner lost his life. “The bookshop owner’s wife arrived with her daughter. At some point, I was holding the child in my arms,” he remembered. “At that time, my son was the same age as that child. When I came home, I found myself confronted with the question: should I show more affection to my child?… The child in Şemdinli does not have a father anymore,” Taştan said, recalling the worry he had that this could also happen to his own child and clearly touched again by the memory.

Despite these difficult moments, they have never hampered Taştan’s motivation to positively change the trajectory of his country. He has never thought about giving up his work in Turkey. When people abroad ask him whether he will return to Turkey for his next hearing, he quickly responds, “Of course.” He elaborates further, “I gave thirty years of my life [to this cause], if I would go somewhere else, I would not be happy. And besides, so many people are putting in so much effort to build a better future, we must be able to change something, right? It only fuels my motivation.”

UPDATE: on 3 July 2020, Nejat Taştan was acquitted. Four of the eleven so-called Istanbul 10 defendants received prison sentences based on terrorist-related offences, and the remaining seven were acquitted.