Now is the time to have this conversation at a global level because this affects all of us,” said Turkish human rights defender Nejat Taştan at the panel discussion The Impact of Counter-Terrorism Measures on Human Rights.

The discussion took place during The Hague International Open Day on 22 September— annual event that gives guests an inside look at various organisations working towards global peace and justice. 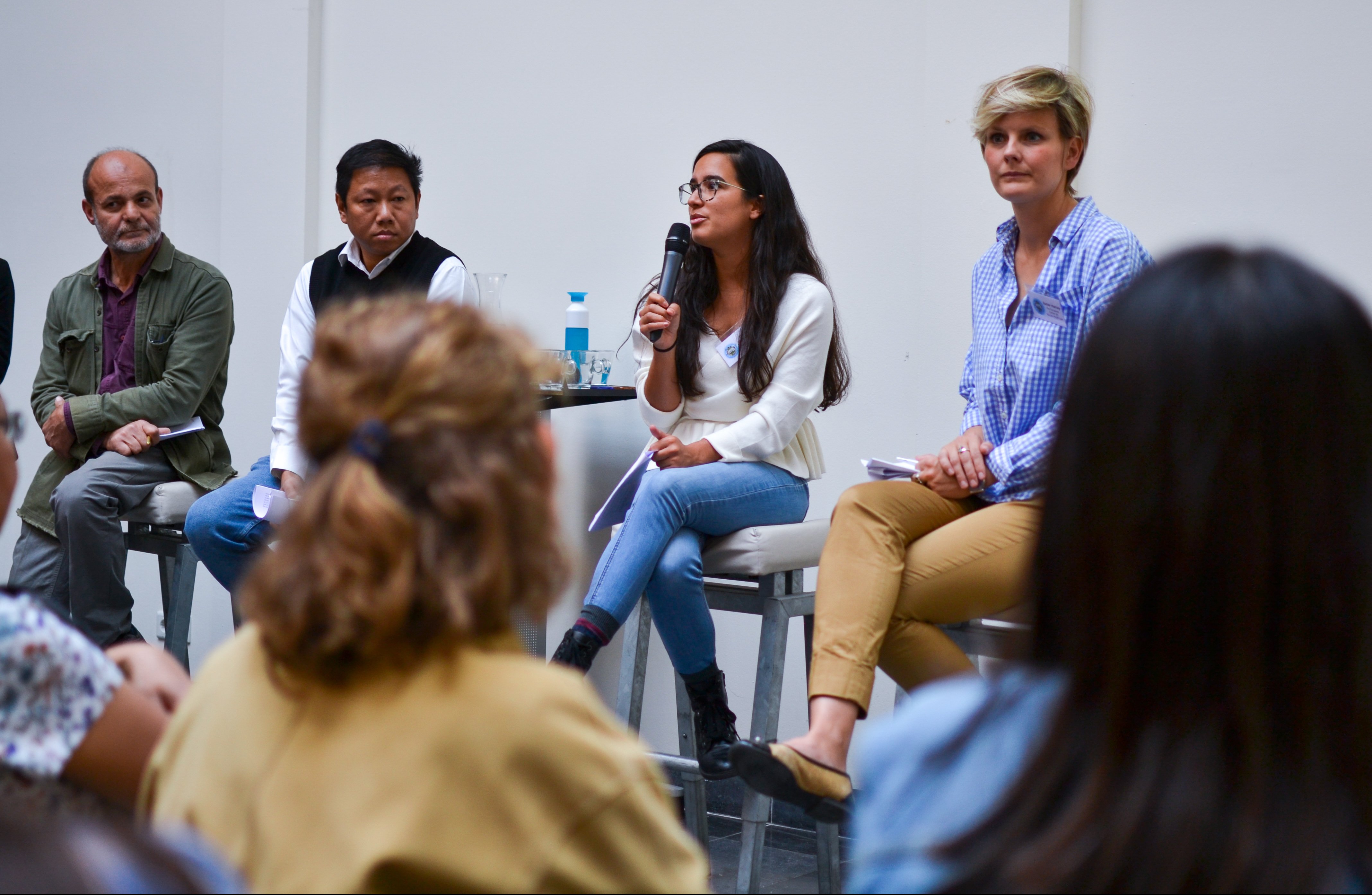 The tension between counter-terrorism measures and human rights

The panellists argued that while security concerns are clearly of importance, tension can occur between security policies (such as counter-terrorism measures) and the protection and respect of fundamental rights and freedoms. Increased awareness is needed at a global level so that states, organisations, and individuals can reduce the threats counter-terrorism measures pose to the protection of human rights. This does not mean security has to be diminished to protect rights, stated Thalia Malmberg, Human Security Collective Programme Officer. She explained that research shows respect for human rights is a necessary element in stable and peaceful societies, thereby contributing to security.

Malmberg and Eszter Hartay, Legal Advisor at the European Center for Not-for-Profit Law opened the discussion by describing post-9/11 developments in security policy, what counter-terrorism measures are, and how they affect human rights defenders. Hartay illustrated the global nature of this trend, and the affect security legislation is having on human rights defenders.

…research shows respect for human rights is a necessary element in stable and peaceful societies, thereby contributing to security.” 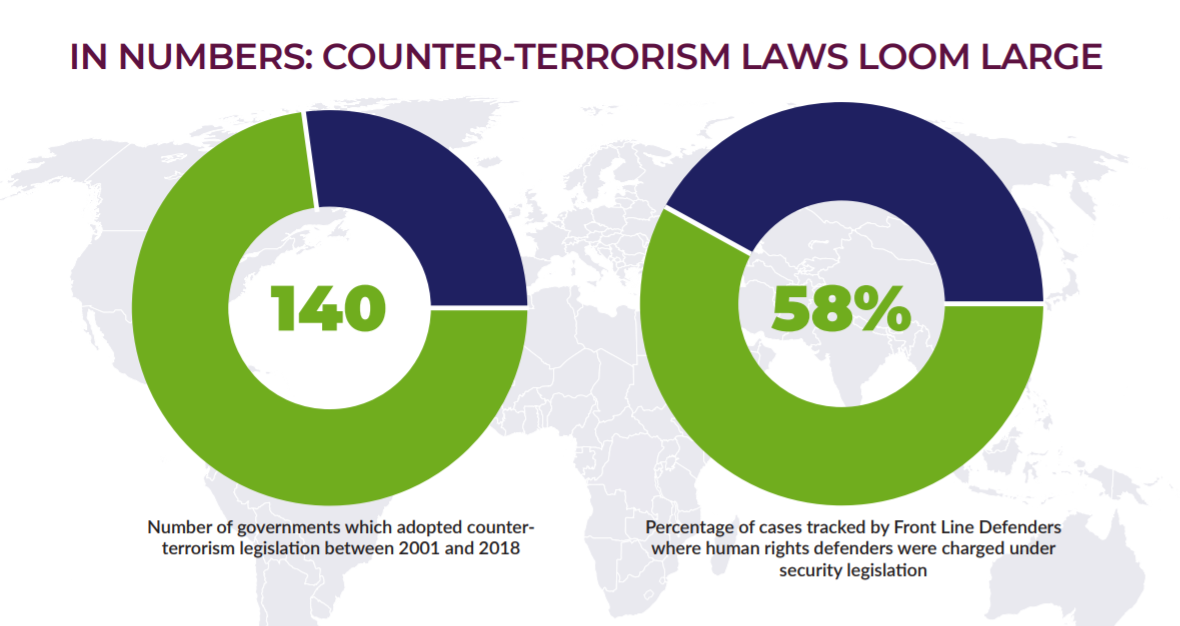 Counter-terrorism measures are affecting civil society around the globe

Additionally, Malmberg showed a clip from the film Hold Your Peace, exemplifying how measures can impede the work of civil society. In the clip, Isabelle Geuskens, Executive Director of the Women Peacemakers Program, The Netherlands, talked about her organisation being denied a bank account in the Netherlands. The rejection was related to “de-risking”— activities undertaken by banks to avoid breaching international sanctions regimes aimed at preventing financial crimes and countering terrorism.

The irony was not lost on Geuskens that, on the one hand, the Dutch Ministry of Foreign Affairs, was financially supporting her organisation’s work. On the other hand, a private institution (the bank) of the same country identified the organisation as a potential security concern and too risky to take on as a client. These types of obstacles have impacted civil society that are now facing difficulties and delays in financial transfers, paying staff members and partners in a timely manner, and high fines, amongst others. The situation of Women Peacemakers, The Netherlands, illustrates the global nature of the impacts of counter-terrorism measures on human rights. “This issue is like something in the water…It is affecting us all,” said Eszter Hartay. 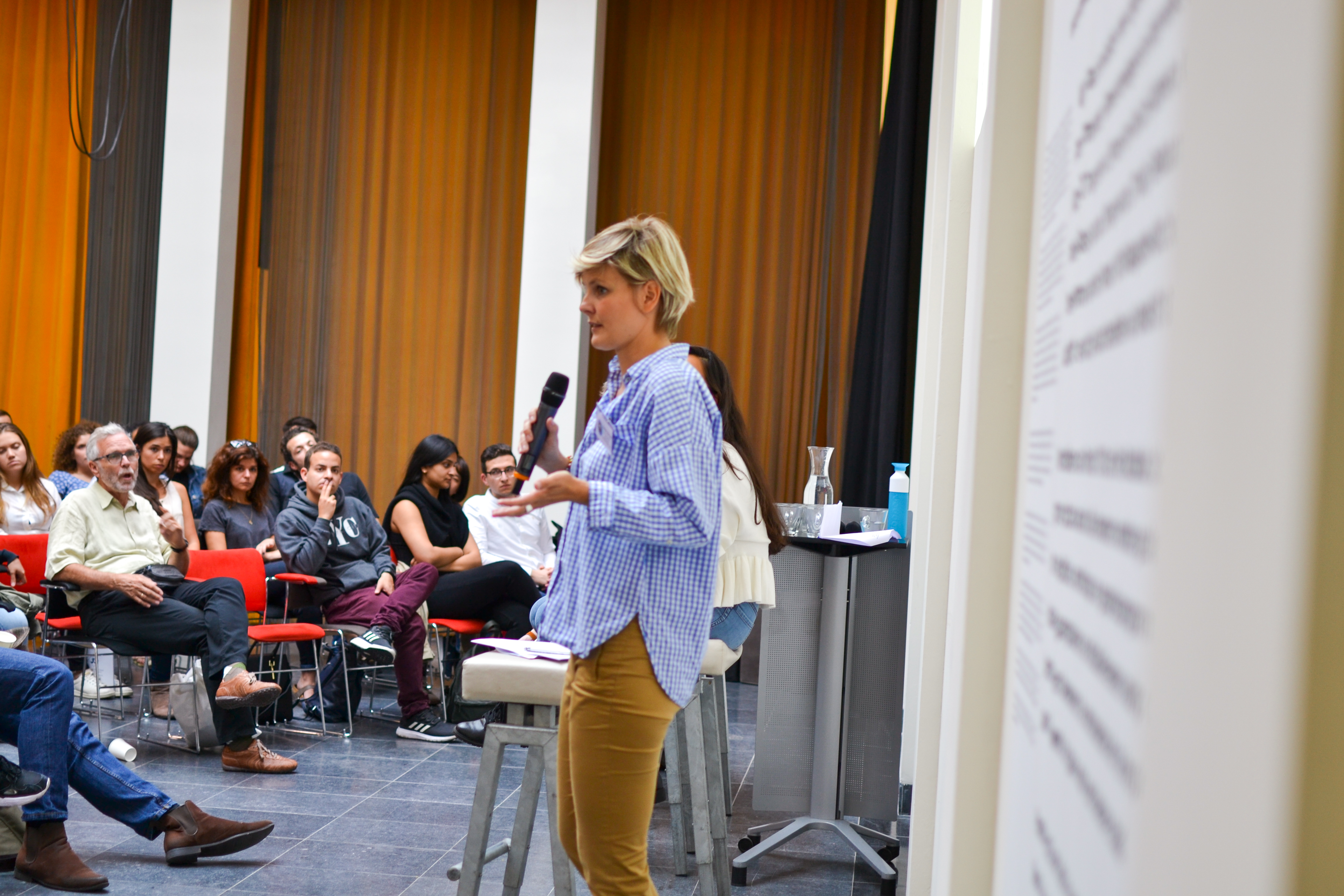 Eszter Hartay from the European Center for Not-For-Profit Law discusses the global nature of counter-terrorism measures and the impacts on human rights defenders. (Photo by Louise Alves/NHC)

The lack of a universally-agreed definition of terrorism allows every country to fill it in as it wishes,” said Malmberg when describing how counter-terrorism measures can negatively impact human rights.

The following speakers, two visiting human rights defenders from Turkey and India, shared their experiences with counter-terrorism legislation and how a lack of definition can be abused. Nejat Taştan, Coordinator of the Association Monitoring Equal Rights, a partner organization of the NHC, shared his story with the audience. Taştan is part of the Istanbul 10, a group of human rights defenders arrested and taken into custody during a digital security training in 2017. The group is currently being sued under Turkish “anti-terrorism” legislation. He described what happened the day Turkish authorities raided the hotel where the meeting took place. Two days without legal representation, months in solitary confinement, and inconsistent rulings by Turkish courts were amongst the things the group endured. Despite this Taştan said, “I have worked to defend human rights for 30 years, I continue to do so, and I will do so for the rest of my life.”

He emphasized that the story he was telling was not just the story of the Istanbul 10. This is a story of hundreds of journalists, academics, and human rights defenders accused of terrorism related activities based on their work in defending rights and freedoms.

(You can read the stories of a few other HRDs here: Defending Human Rights in Turkey) 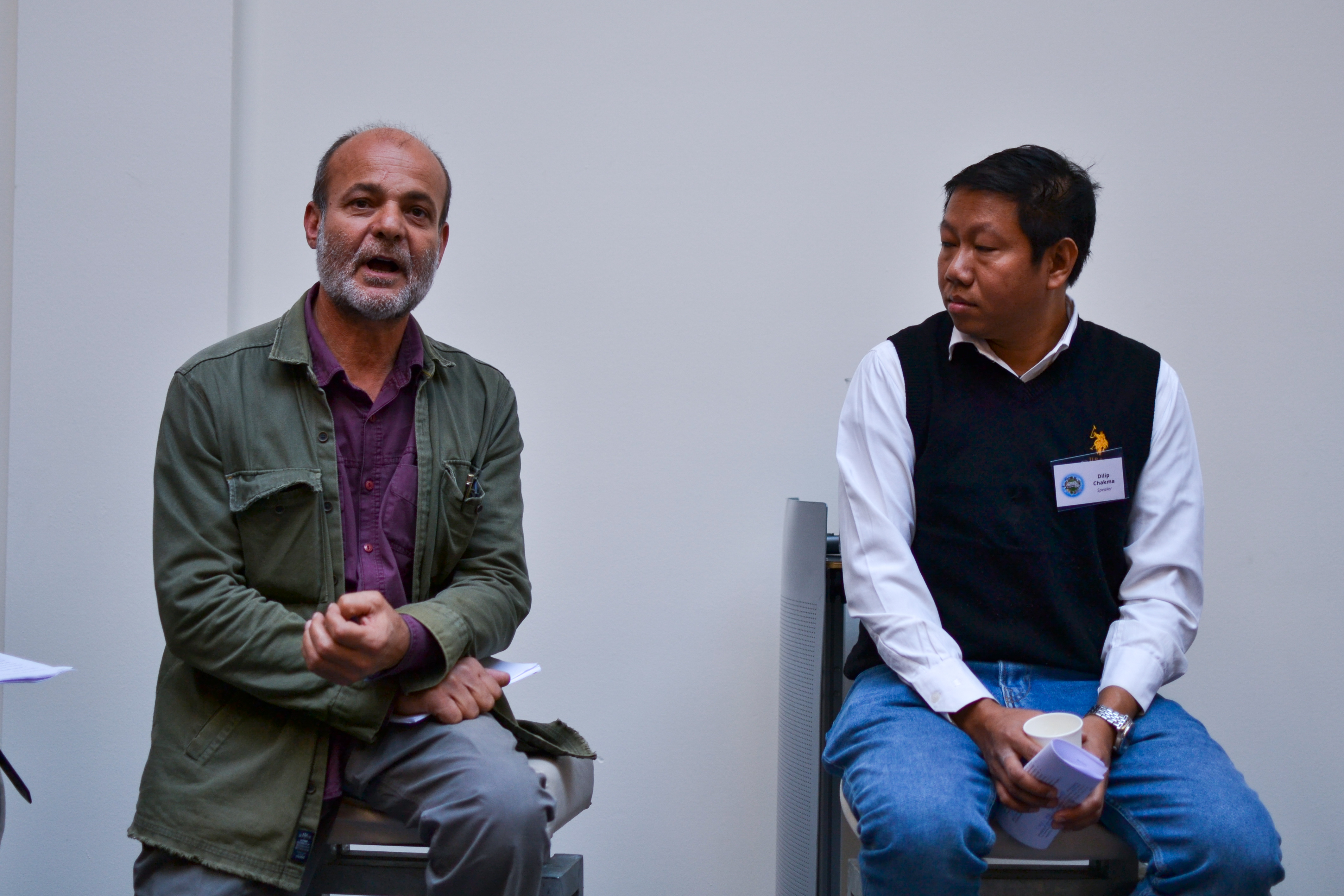 India enacted the AFSPA – a counter-terrorism act – in 1958,” said Chakma.

He explained that the act “provides full immunity to security forces,” effectively removing accountability in cases where government forces violently suppress civil, political, or rights demonstrations. In the more than 60 years this Act has been in place, no member of the armed forces has been charged for potential abuses. However, slowly this may be changing. Chakma shared that cases he and his organisation are working on have recently been accepted by courts. This could eventually contribute to diminishing the immunity of the armed forces granted under the Act. Chakma is currently in the Netherlands with the Justice and Peace Shelter City Initiative, he is a human rights lawyer for the Asian Center for Human Rights in India. 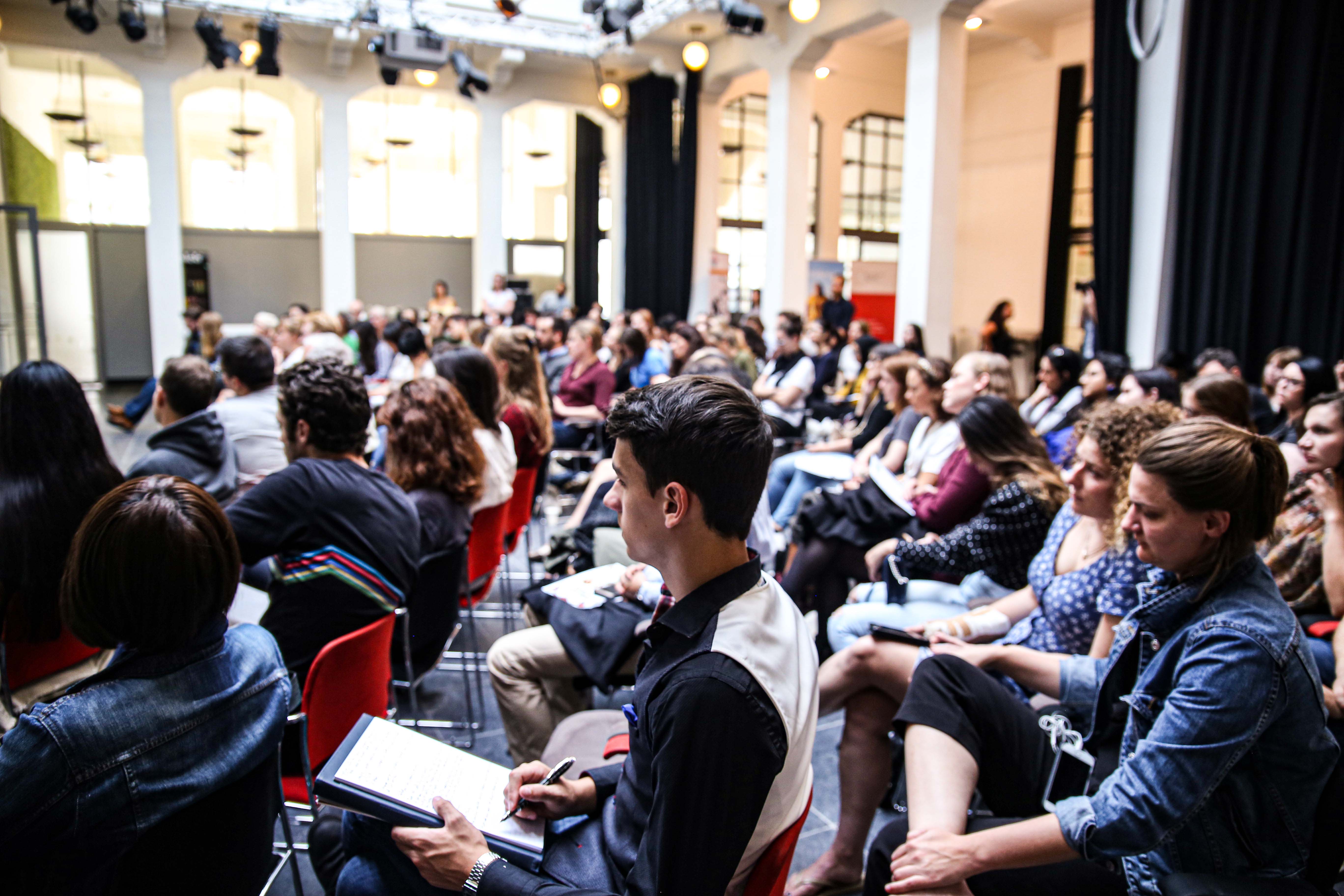 Audience members at the panel discussion for The Hague International Open day: The Impact of counter-terrorism measures on Human Rights. (Photo by Justice and Peace)

More than 100 participants attended to reflect on the topic and listen to the personal experiences of the effects of counter-terrorism measures on defending human rights. The event took place at Het Nutshuis, and was organised by the NHC, Justice and Peace, Human Security Collective, and the European Center for Not-for-Profit Law.