From Dictatorship to Democracy: Albania, Ukraine and Everywhere Else

(The Hague) On Friday 13 September, the Night of Dictatorship (Nacht van de Dictatuur) event took place. Several lectures and programmes were held, which shed light on the topic of dictatorship and authoritarianism. There was also a guided tour offered titled, “From Dictatorship to Democracy.” The event takes place every September throughout the Netherlands as a counterpart to the International Day of Democracy.

This year the NHC collaborated with Justice and Peace and Hague Talks Youth to put together tours of the Prison Gate Museum (Gevangenpoort Museum), highlighting transitions from dictatorship to democracy. As museum staff guided guests through the museum, they listened to two human rights defenders from Ukraine and Albania speak about their country’s history with dictatorship and share stories of living through these systems. Afterwards Hague Talks Youth quizzed the audience on dictatorship and democracies, highlighting the many ways in which governments (could) restrict rights and democratic freedoms.

Yuri Frank explained the political and legislative changes in Ukraine that led to the 2014 Euromaidan protests and shared his personal experiences during the demonstrations. Frank is an LGBTQI activist from Ukraine who is currently in the Netherlands under the Justice and Peace Shelter City Initiative.

Rovena Vuksani, of the Albanian Helsinki Committee— a partner organisation of the NHC in prison reform projects— described her country’s history under the Hoxha regime. “A fateful blend of isolation and dictatorship kept this tiny Balkan country the poorest and most repressive in all of Europe,” she said. Vuksani graphically illustrated the situation of political prisoners at that time, explaining why they were imprisoned and what they did when they got there. She told the stories of two prisoners: Dom Shtjefni, the priest who was executed because he baptized a child, and Simon Mirakaj, the two-week old baby sent to prison for 46 years. Finally, she described the current situation since the first democratically held elections took place in the country in 1992.

Click here for Rovena’s speech: From Dictatorship to Democracy- Albania 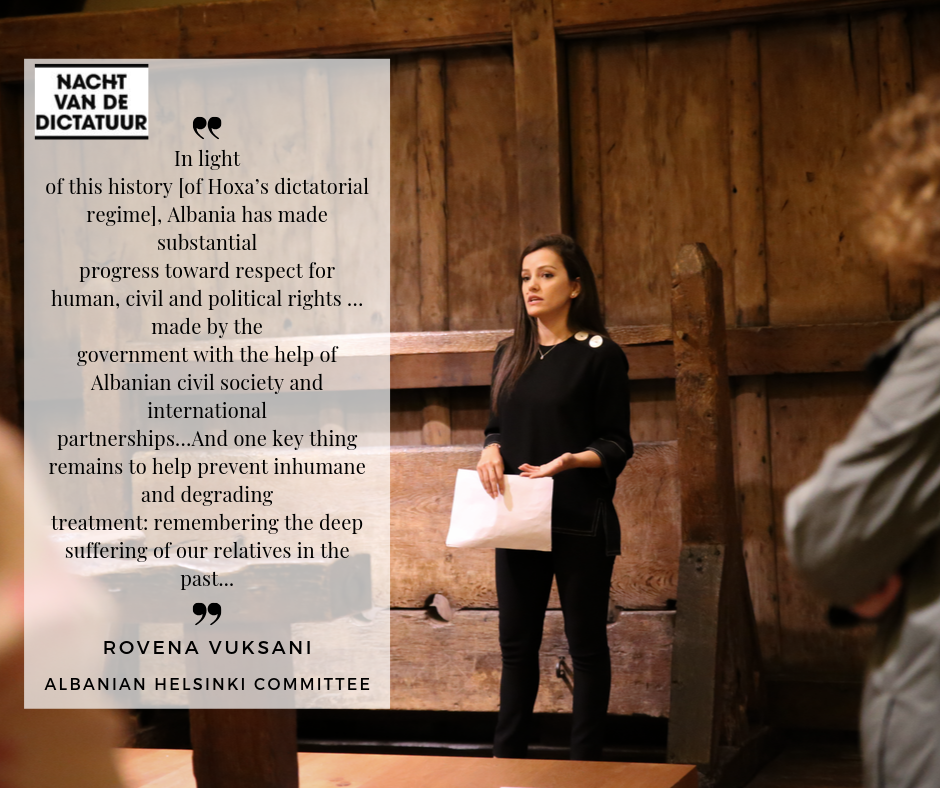