Struggle for Rule of Law in Poland Continues

On Sunday 13 October, Poland held its Parliamentary elections. The nationalist Law and Justice party retained an absolute majority in the main Lower House (Sejm) of parliament, but narrowly lost its majority in the Senate. International election observers described the elections as prepared well, but with media bias and intolerant rhetoric negatively impacting the process.

The results of this election are of particular importance in light of the Polish government’s ongoing efforts to undermine judicial independence in the country. These efforts do not just involve extensive legal changes, but also media smear campaigns against judges who oppose the changes. In August 2019, it was revealed that the wife of a Ministry of Justice official in Poland was behind a Twitter account responsible for sustained smear attacks against Polish judges. The account, which targeted judges who have spoken out against diminishing judicial independence in the country, was being fed information – often highly confidential – from within the Ministry of Justice. The scandal, though not the first instance of intimidation of judges through social media, shook Polish politics and resulted in the resignation of of Łukasz Piebiak, Deputy Minister of Justice. 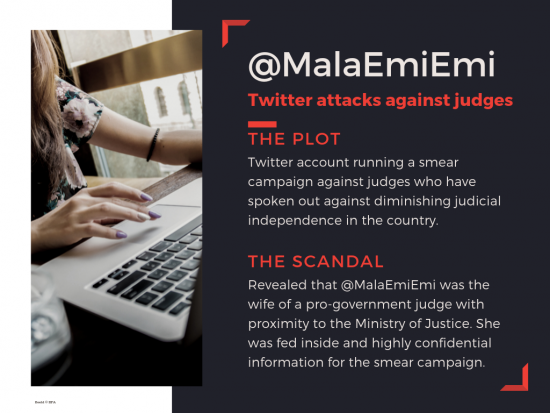 Judicial independence, a cornerstone of the Rule of Law, has been under attack in Poland since the Law and Justice Party came to power in late 2015. Attacks like those mentioned above represent only a fraction of the pressure that has been exerted on Poland’s judges. The Helsinki Foundation for Human Rights (HFHR) in Poland, a sister organisation of the NHC, have been carefully monitoring the various ways the Polish government is seeking increase control of the judiciary.

To summarize the HFHR’s findings, Polish judges – on top of a campaign of intimidation and harassment online – have seen their judicial independence undermined in three key areas:

Given the HFHR’s findings, Amnesty International’s characterization of the situation in Poland as a ‘Witch Hunt’ seems accurate. There can be no doubt that judicial independence in the country, and the Rule of Law more broadly, are under threat. 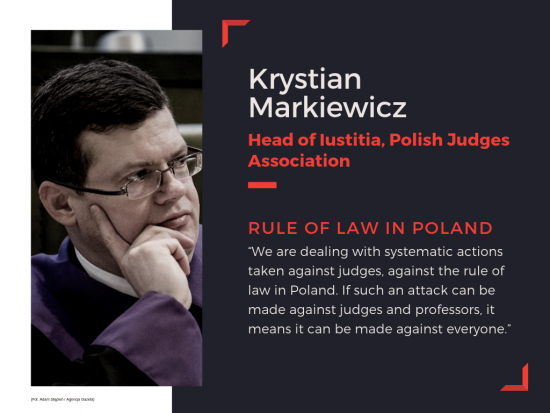 The Rule of Law, including the independence and impartiality of courts, is one of the EU’s fundamental shared values. The European Commission has recently re-affirmed the view – one shared by the NHC – that threats to the Rule of Law in one country damage mutual trust between member states and set dangerous precedents for other countries to follow. In light of this, the European Commission has initiated several elements of the “Rule of Law Toolbox” of the EU to address the situation in Poland.

In December 2017, in light of the “clear risk of a serious breach of the Rule of Law,” the European Commission announced it would take the unprecedented step of beginning procedures against Poland under Article 7 of the Treaty of the European Union. Unless remedial action is taken by the Polish government, this could, after a series of steps, lead to sanctions against the country. In view of the decision-making requirements (unanimity among member states minus one) this level is unlikely to be reached since the current Hungarian government has aligned itself with Poland.

In parallel procedures, on a number of issues the Commission has started “infringement procedures” relating to incorrect implementation by Poland of European Union law. Such procedures lead to a ruling by the Court of Justice of the European Union in Luxemburg. For example, in June 2019, the Court ruled that new retirement age provisions for the Polish Supreme Court— forcing out a number of judges and having the effect of their quick replacement by new judges aligned with the current government— were contrary to EU law. Other issues remain pending before the Court. 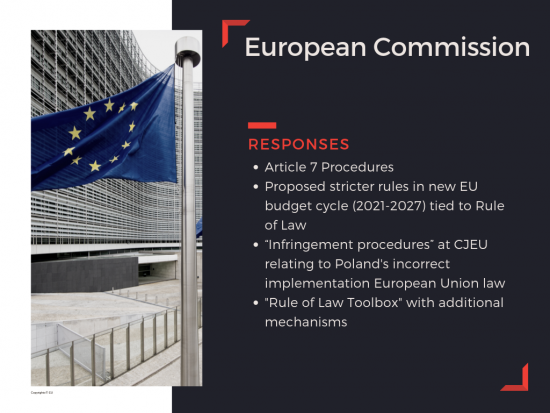 A further, potentially powerful mechanism would be linked to expenditure from the European Union budget, substantial amounts of which are aimed at supporting economic development in Poland and other Central and Eastern European member states. The European Commission has proposed that in the new EU budget cycle (from 2021 to 2027) stricter rules would apply. According to the Commission, these rules would be aimed at, “[P]rotect[ing] EU tax payers’ money in case of deficiencies regarding the rule of law in a Member State. Only an independent judiciary that upholds the rule of law and legal certainty in all Member States can ultimately guarantee that money from the EU budget is sufficiently protected.” This could imply severe financial penalties for member states. Whether and how this link will be made is still subject to discussion currently going on between the Commission, the European Parliament and the Council (the member states).

The European Commission has thus taken some positive steps towards addressing the situation in Poland. However, there is a need for continued pressure and monitoring of the Polish situation from actors at all levels. This includes EU Member States, as rule of law backsliding in Poland, or any individual member state, could trigger similar processes across the Union as a whole.

National parliamentarians also have a responsibility to closely monitor rule of law developments across the European Union. The NHC, in close cooperation with other EU civil society organisations, is pursuing an advocacy strategy aimed at mobilizing Parliaments in EU Member States to stand up for the rule of law. The Dutch Parliament’s February 2019 Roundtable Hearing on the Rule of Law in Hungary and Poland was an example of the kind of discussion that is urgently needed throughout the EU. Equally, the NHC echoes Professor Krystian Markiewicz, from the Polish Judges Association, who calls for solidarity among Europe’s NGOs and Professional Associations in the face of blatant government attempts to undermine judicial independence.

When discussing the issue of rule of law backsliding in the EU, NHC Director, Pepijn Gerrits has said, “We believe that the Rule of Law, when respected and upheld, provides collective benefits. It is therefore a collective responsibility to defend this fundamental value of the European Union.” Recent advocacy work of the NHC, including the ‘5 Points for EU Action’ and its current project ‘Samen (Net)werken aan Mensenrechten in Europa’ (‘Networking Together on Human Rights in Europe’) reflects this firmly held belief. The project, funded by a one million euro donation from the Dutch Postcode Lottery, advocates for greater adherence to Council of Europe standards, and strengthening civil society outreach to counter the spread of illiberal democracies and rule of law backsliding – exemplified by the worrying developments that have taken place in Poland these last years. 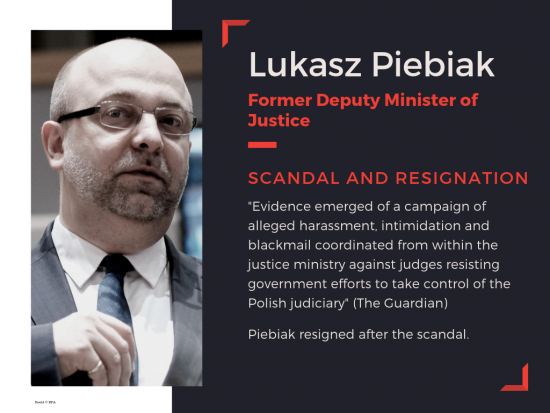 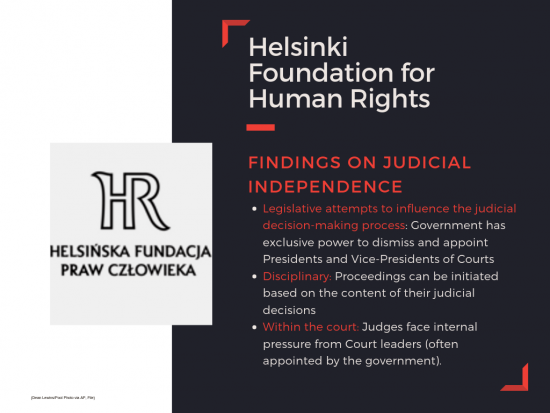 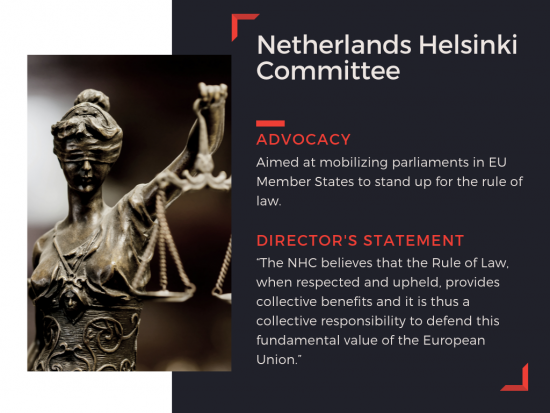