“Threats to the rule of law in one EU country threatens the functioning of the Union as a whole,” stated Professor of European Law at Middlesex University London, Laurent Pech in his position paper for the House of Representatives of the Netherlands. Pech submitted the paper as official input for a Roundtable Hearing on Rule of Law in Hungary and Poland at the Dutch Parliament on 14 February 2019.

In a radio interview leading up to the hearing, NHC Executive Director Pepijn Gerrits made a similar claim, “In the EU we have agreed to respect ‘European values’ like the rule of law, human rights, and democracy. If one of the members of the Union infringe on these values that could eventually have consequences for other countries [in the EU].”

The hearing— comprised of three debates divided between representatives of academia, the judiciary, and civil society— was led by the Parliamentary Commission on European Affairs. It was in preparation for an upcoming Dutch delegation visit to investigate the rule of law situation in Poland and debate with Stef Blok, Dutch Minister of Foreign Affairs. A similar investigative visit was planned for Hungary, but the delegation was refused an audience by the Hungarian government. Other parliaments have already or are planning to organise similar discussions, demonstrating the topic’s growing significance at the national parliamentary level. Recently the French Parliament adopted a resolution on the rule of law in Europe—specifically targeting Hungary; there are also plans for the Belgian Parliament to conduct a similar debate. 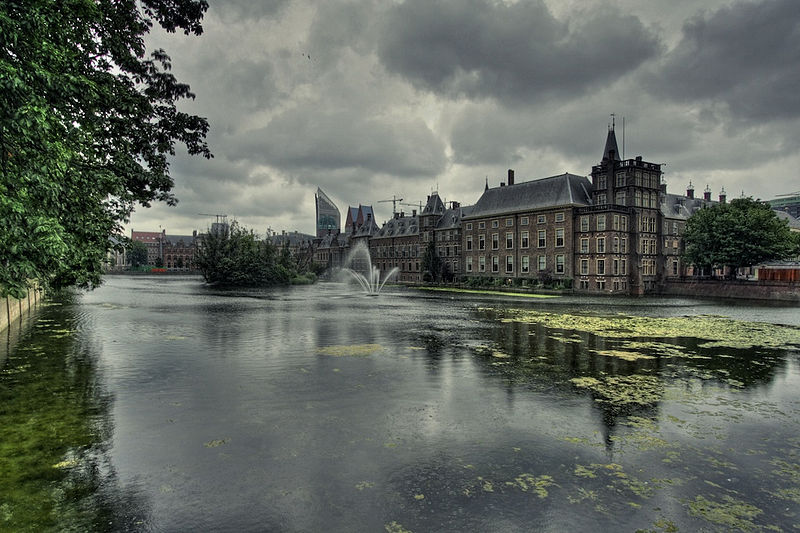 The NHC contributed to the hearing through the preparation of a report on corruption in Hungary for the Parliament and through coordination with its sister organisations, the Hungarian Helsinki Committee and the Helsinki Foundation for Human Rights, based in Poland.

But why precisely would the national parliament of one country discuss the rule of law situation in another? As implied by Pech, Gerrits, and many of the other representatives present at the hearing, it is because the deterioration of the rule of law— often referred to as “rule of law backsliding”— in one country effects the functioning of the European Union (EU) as a whole.

Every country plays an important part in the decision making process at the EU, if one country is increasingly defined by values counter to those recognized and agreed upon by the EU, it can in turn have a wider influence to the EU as a whole—a chain is only as strong as its weakest link. There are indeed a set of common values that have been agreed upon by EU members, which include respect for the rule of law, human rights, and democracy. If a country stops upholding these common values, trust between EU countries deteriorates and the legitimacy of the EU as a whole suffers. When discussing why the EU must deal with the situation in Poland First Vice-President of the European Commission Frans Timmermans said, “The rule of law is a necessary condition for effective cooperation between Member States.”

In the EU we have agreed to respect ‘European values’ like the rule of law, human rights, and democracy. If one of the members of the Union infringe on these values that could eventually have consequences for other countries [in the EU].” – Pepijn Gerrits

Lack of effective cooperation can result in an unwillingness to share intelligence and data, a significant problem for national security. This can also have direct consequences for the functioning of the EU single market, a direct interest for the Netherlands. In his paper, Pech reiterated a message from Dutch Prime Minister Marke Rutte:

On both sides of the aisle, there was a clear recognition of what is at stake. When defending the developments in Hungary Professor of East European Studies at the University of Amsterdam, László Marácz, similarly stated in his position paper, “In the end the very existence of the Union itself might be at stake… The state of the rule of law is at the heart of the European project and should refer to all parties involved.”

Roundtable Hearing: Civil Society Discussion of the Rule of Law in Hungary and Poland at the Dutch Parliament

The consequences of rule of law backsliding

In the last few years, there has been regular coverage of the worrying legislative developments in Hungary and Poland. A term frequently used to describe these developments is “rule of law backsliding” (or “democratic backsliding”). These are situations where a government imposes legislative changes aimed at increasing control over, amongst other things, the judiciary (the central topic of discussion in the hearing). Independence of the judiciary is widely recognized as a cornerstone for the rule of law; when independence is threatened, the rule of law deteriorates. The judiciary serves as an important check in the “checks and balances system” integral in pluralistic democracies. When the judiciary cannot serve as a check, i.e. is excessively influence by the government, power can be centralized in the hands of the government which could help solidify its leadership position.

The Netherlands Council for the Judiciary described the situation of the judiciary in Poland and Hungary as “coming under increasing pressure” and that (some of) the legislative changes in the two countries are such that “the influence of the executive power on the judiciary is structurally increased.” Given the interdependent nature of all EU legal systems, changes in one system—for example in Poland— “can have direct consequences for the European legal culture that Dutch law is part of, as in the case of extradition requests.”

A commonly repeated counter attack to the criticism lodged against Hungary and Poland is that most criticism (from the EU, individual countries, and the media) is fundamentally political and biased in nature.

Rule of law is indeed a vague concept. It does not have a one size fits all nature. But, that does not mean it is not defined” – Petra Bard

What can be done in the Netherlands and by the European Union: Carrots and Sticks

One question posed by the Parliamentarians was whether there were in fact sufficient mechanisms within the EU framework to tackle the problem of rule of law backsliding. The hearing’s participants confirmed that there are; some specific suggestions were:

Participants emphasized the need to increase and improve dialogue when Parliamentarians asked what would be required for an effective peer review mechanism. Such a mechanism could be used to monitor the state of rule of law in the EU as a whole. There was a general consensus that “rule of law” is not clearly enough defined, making monitoring and assessment of other EU members difficult. A clearer understanding of what the EU common values mean would be beneficial to all EU members. “Rule of law is indeed a vague concept. It does not have a one size fits all nature. But, that does not mean it is not defined,” said Petra Bard, Associate Professor ELTE School of Law, Hungary and Visiting Professor at Central European University, referring to certain minimums that have been agreed upon when describing the rule of law.

Geert Corstens, former President of the Supreme Court of the Netherlands, also suggested the Netherlands should continue dialogue. Countries, like the Netherlands, should explain how it deals with its own challenges and functions of rule of law. All judicial systems have weaknesses and problems—an important point to recognise— and countries should be open in explaining how they cope with such problems. He emphasized that this should not be done in a “superior or arrogant style” and that it is essential to support those in Poland and Hungary that want to improve the situation. This openness in dialogue between and amongst EU countries could contribute to a much needed peer review mechanism for the state of the rule of law in the EU, similar suggestions have recently been made by the Belgian government.

The hearing, upcoming investigative visit in Poland and debate with the Dutch Minister of Foreign Affairs, planned for 14 March 2019, will help the Commission asses the Dutch government’s performance and policy choices with regards to the EU. These types of open discussions from a wide array of representatives and points of view contribute significantly making informed choices and pursuing effective policies.

During the hearing and in an earlier interview, Marta Pardavi, Co-Chair of the Hungarian Helsinki Committee, welcomed the opportunity to speak with the Dutch Parliament and emphasized the importance of convincing colleagues from other EU parliaments to also take similar initiatives. Actions at the EU level to tackle the situation of Hungary and Poland, like the Article 7 procedures, are being slowed down. National initiatives like the one initiated by the Dutch Parliament are needed now more than ever to continue to push the issue forward.

Click the links below for previous coverage of this and related topics from the NHC: