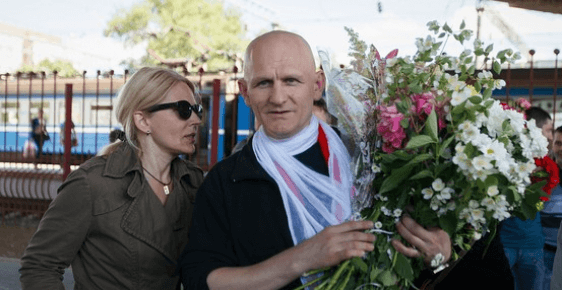 The NHC congratulates Ales Bialiatski, his family members and all his friends and colleagues with his early release from prison on Saturday 21 June 2014.

Ales Bialiatski is Chairperson of Human Rights Centre “Viasna” and Vice-President of the International Federation for Human Rights. On 4 August 2011 he was detained by police representatives of the Department of Financial Investigations and on 24 November, he was sentenced to four and a half years imprisonment on charges of “concealment of income on a large scale” (article 243.2 of the Belarusian Criminal Code). In previous campaings the NHC advocated for his release.

Ales Bialiatski never admitted guilt and was widely considered a prisoner of conscience, sentenced on politically motivated tax charges and targeted because of his legitimate human rights work. His release, 20 months before term, is great news, and the NHC expresses its congratulations to all those close to Ales.

Yet, however great this step was, it cannot yet be considered a signal of change. There are still 7 other political prisoners in Belarus, and the government still actively represses civil society and human rights defenders. One of the current priorities for the NHC is the abolishment of article 193-1 of the Belarusian Criminal Code, prohibiting any activity on behalf of an unregistered organization, which is a clear violation of the Belarusian Constitution and the country’s obligations under international human rights law.