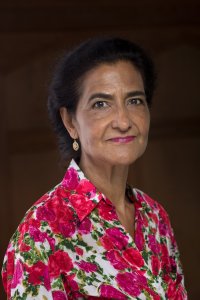 Kathleen Ferrier teaches Gender and Politics and is honorary professor in human rights at the Asian University for Women in Chittagong, Bangladesh. From 2002 until 2012 Ferrier was a Member of Parliament in the Netherlands, for the Christian Democratic Party. During this time she was spokesperson on International Development Cooperation, Social Affairs and Employment, Health, Welfare and Sports, and Education. She was also a member of the OSCE Parliamentary Assembly, where she was elected Special Representative on Migration. Ferrier hopes to bring her experience and expertise to the work of the NHC in particular with regards to raising awareness about the complexity of human rights issues.

Ferrier is involved in a number of boards, including the Martin Luther King Lecture, Stichting Geuzenpenning  and the Foundation Johan Ferrier Fund. She also sits in the International Institute of Social Studies Advisory Board. Ferrier has received several awards both internationally and in the Netherlands. After leaving Parliament in 2012, Ferrier was awarded the Ridder in de Orde van Oranje Nassau. She studied Spanish Language and Literature at University.