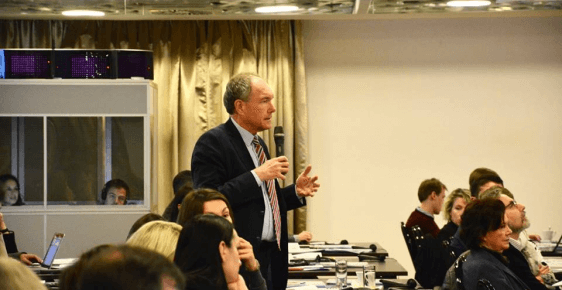 In order to deliver security in Europe, stronger emphasis on compliance with human dimension commitments is needed. This was the overriding message from the Parallel Civil Society Conference, held in Belgrade on 1 and 2 December 2015, ahead of the 2015 Ministerial Council meeting of the OSCE. The conference was organized by the Civic Solidarity Platform together with the Helsinki Committee for Human Rights in Serbia. The Platform issued a set of documents, with recommendations to the Ministerial Council, including a Belgrade Declaration on Freedom of Expression.

Among other issues, the Declaration calls for countering state policies which restrict or prohibit independent media and favour the production and distribution of highly biased or even falsified information and of hateful speech. The issue was also raised by Dunja Mijatovic, the OSCE Representative on Freedom of the Media, in her speech at the Parallel Conference. She referred to her recent ‘non-paper’ on Propaganda and Freedom of the Media, which includes a discussion of the original 1975 Helsinki commitment to “to promote […] a climate of confidence and respect among peoples consonant with their duty to refrain from propaganda for wars of aggression or for any threat or use of force […] against another participating State”. NHC Associate Policy Director Harry Hummel: “Such propaganda clearly is a factor contributing to the current Ukraine/ Russia conflict. Proper policies on media independence and diversity would be a key factor in the creation of a climate of confidence among states and among peoples. This connection is just one example of how the OSCE’s human dimension is essential for military-political security.”

The Platform set of documents also includes reports from a series of workshops held during 2014 aimed at reviewing in depth elements of the OSCE’s mandate, including a workshop on making more productive the OSCE’s review and discussion procedures on the human dimension. Systematic placement on the agenda of the OSCE’s Permanent Council (via its Human Dimension Committee) of reports by OSCE bodies and of state follow-up of these reports was a central idea in this workshop. States that are committed to the human dimension should make greater efforts to meaningfully follow up on OSCE recommendations and to report on their follow-up. Chairmanship countries can play an important role in promoting the gradual institutionalization of good practice in pursuing human dimension goals. The self-assessment of compliance with OSCE commitments by (future) Chairmanship countries, started by the Swiss 2014 Chairmanship, is one practice that should become a standard item for each Chairmanship.

The recommendations documents were handed over by Civic Solidarity Platform representatives to representatives of the OSCE Troika and OSCE/ODIHR at the closing session of the conference. A number of the conference participants stayed over to observe the Ministerial Council Meeting and held bilateral meetings with ministers of foreign affairs, ambassadors and delegations.

The Netherlands Helsinki Committee was involved in the organization of the Conference as well as the workshops as an active member of the working group on International Organizations of the Platform. Part of the funding for these activities came from the Netherlands Ministry of Foreign Affairs; other contributors were the Swedish, Swiss, German and Serbian governments, and the OSCE field presences in the Western Balkan countries.