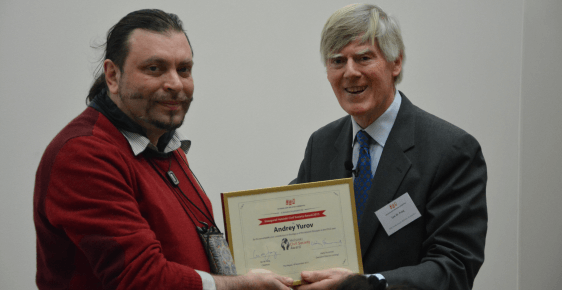 Arzu Abdullayeva from Azerbaijan and Andrey Yurov from Russia were the laureates of the first Helsinki Civil Society Award, presented on 19 November 2015 in The Hague. The Netherlands Helsinki Committee launched the award to honour the work of prominent activists and organizations that base their activities on, and contribute to the legacy of, the Helsinki principles. These were established in 1975, the year when the leaders of the European states from east and west committed to safe-guarding security and to guarantee human rights and fundamental freedoms. The Helsinki commitments laid the basis for the Organization for Security and Cooperation in Europe (OSCE).

Arzu Abdullayeva has for over 25 years made a significant contribution to multi-track diplomacy efforts, building trust across the conflict divide in the protracted conflict over Nagorno-Karabakh, and contributing to human rights protection in Azerbaijan. She is chair of the Azerbaijani national committee of the Helsinki Citizens’ Assembly. Andrey Yurov, a writer and philosopher from Voronezh (Russia), in 1998 founded the International Youth Human Rights Movement. He is engaged in many educational efforts, in solidarity campaigning and in organizing monitoring missions in situations of gross human rights violations across the OSCE area, including in Georgia, Kyrgyzstan and Ukraine.

In presenting the Award, NHC chairman Ian de Jong recalled the increase in conflict and in human rights violations in recent years in a number of OSCE participating states. “Despite the climate of intimidation and incredibly restrictive circumstances, many committed individuals persist in their pursuit of just, rights-based societies. It is in this modern context, that the grassroots work, the international cooperation and solidarity of the civil society organisations are needed no less than 40 years ago. European civil society should persist in its demands that states keep their Helsinki promises and reaffirm their commitment to the OSCE and its normative basis.”

The winners of the Helsinki Civil Society Award 2015 underlined the significance of international solidarity in human rights work. Short interview with both of them is presented below.

The acceptance speeches were followed by short presentations on what the OSCE and European states and societies can do to support human rights defenders. Snjezana Bokulic, the former Head of the Human Rights Department of the Office for Democratic Institutions and Human Rights of the OSCE, highlighted the possibilities for of the organization to promote compliance with the OSCE Guidelines on the Protection of Human Rights Defenders. Harry Hummel, Associate Policy Director of the Netherlands Helsinki Committee, spoke about the lack of joint efforts by EU member states and other democratic European states to stand up for compliance with the European Human Rights Convention in all Council of Europe member states.

Please find interviews with the laureates here for Andrey Yurov and here for Arzu Abdullaeva. A video with parts of the acceptance speeches of the laureates can be found here.