Anjelik Kelavgil is an LGBTI+ rights defender, who has defended rights for all in Turkey. An active member of the LGBTI+ rights community in Ankara and throughout Turkey, Anjelik has remained steadfast in fighting for what they* believe in despite the often dangerous situation in the country where LGBTI+ activities are surveilled and staunchly suppressed. Sustained attention and a proactive strategy by the EU and its Member States is needed to defend Anjelik and other human rights defenders in Turkey from further criminalisation and reprisals for their work.

The portrayal of Anjelik’s situation is a continuation of the series, “Defending Human Rights in Turkey: Stories that Need to Be Heard,” told by Tan Tunali, with illustrations by Marco Lambooij.

* Anjelik prefers the pronoun they. 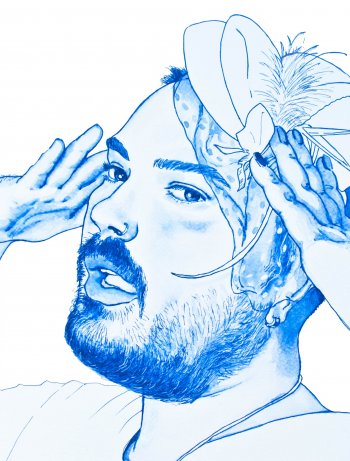 When the TEKEL tobacco plant workers put up tents in central Ankara in December 2009 to oppose privatisation measures, Anjelik Kelavgil was still a teenager. Out of sympathy for the workers’ struggle, who were ferociously dispersed by the police with pressurised water in the cold winter, Anjelik joined the protests. The protests lasted for over four months and became the largest workers strikes in Turkey from recent decades. For Anjelik, this was the beginning of becoming politically active, and they have remained so ever since.

In their teenage years, during their first protests Anjelik, who now identifies as non-binary trans, was not open about their gender identity. Despite leftist circles being known as one of the more socially progressive groups in Turkey, Anjelik feared non-acceptance of their gender identity amongst circles they moved in. “I felt I wouldn’t be accepted,” Anjelik said when describing their earlier years.

In 2013, Anjelik put up a tent in Gezi Park, Istanbul, in support of a different group’s rights, during another wave of large protests. What started out as small group of environmentalists’ demonstration to prevent the tearing down of the Gezi Park’s trees to make room for an Ottoman-style shopping mall, became a national and international sensation (For more background on the environmentalists’ protest read Can Atalay’s story here). The violent suppression of the initial Gezi Park protestors sparked outrage amongst a wider group in Turkish society, many of which joined the demonstration in solidarity. Increasing police brutality against the growing number of protestors ignited what is now known as the biggest anti-government protest in recent Turkish history.

Irrespective of socioeconomic classes, Kurds, LGBTI+s, Kemalists, conservatives and many others came together… ‘It was like a big wedding. People who didn’t know each other danced together and exchanged ideas’,”

Anjelik remembers the summer of 2013 as a period where many became more accepting of others with different political beliefs and identities. Irrespective of socioeconomic classes, Kurds, LGBTI+s, Kemalists, conservatives and many others came together in their desire to protect the park and more generally, to protect people’s right to defend it. A wide range of groups found common ground in their resentment towards police brutality and the increasingly authoritarian tendencies of the Justice and Development Party (AKP) government. “It was like a big wedding. People who didn’t know each other danced together and exchanged ideas,” Anjelik shared. For them, the peaceful Gezi Park protests meant the beginning of a personal renaissance. In the years following the protests, Anjelik embraced their gender identity and came out as non-binary trans.

During this period, the LGBTI+ community in Turkey, an integral part of the Gezi Park protests, broke through barriers of fear and gained increasing visibility and acceptance in society. The Istanbul Pride march in 2013, which took place during the Gezi Park protests, was attended by tens of thousands of people, many of whom wanted to show solidarity to the community; this was a drastic change from the first Istanbul Pride march in 2003 with a few dozen in attendance. A decade later, tens of thousands flocked to the central Istanbul Istiklal Avenue in a colourful march, supported by a large number of local and international civil society organisations. Pride marches were organised in cities all over Turkey as a result and similar support was shown during the following year.

Since the Gezi Park protests of 2013, and through people Anjelik met that summer, they became immersed in Turkey’s vibrant LGBTI+ scene. They joined the Pride Week’s organising committee, gaining valuable experience in activism. Those encounters and the LGBTI+ rights NGO, Social Policy Gender Identity and Sexual Orientation Studies Association (Sosyal Politikalar Cinsiyet Kimliği ve Cinsel Yönelim Çalışmaları Derneği – SPoD), which Anjelik still actively supports, are vital for them. Today, Anjelik is a full-time trans-activist, advocating equal rights for the LGBTI+ community wherever they can. Currently, they work at the NGO Pink Life (Pembe Hayat), where they, amongst other tasks, organise the Pink Life QueerFest film festival—the 9th edition of which will take place in January 2020 in Ankara and Istanbul.

Perseverance in the face of backlash against the LGBTI+ community

While acceptance has been growing amongst certain parts of Turkish society, the increased visibility of the LGBTI+ community has also led to negative reactions both from within society and from the authorities. “It meant that some people started hating us more,” Anjelik explained. In describing why there has been a negative backlash, Anjelik said it was a consequence of people being more directly confronted with the LGBTI+ community’s existence in Turkey. Outside Anjelik’s work—and friend circles—it remains difficult to be accepted in society. “Every part of [Turkish] society is dominated by masculine, patriarchal and heteronormative structures. If you are different, people look upon you as if you have an illness,” said Anjelik .

Despite victories of the LGBTI+ community in Turkey, a 2013 Pew Research Centre poll found that 78 percent of people in Turkey do not think homosexuality “should be accepted” in society. According to the Trans Murder Monitoring report in 2016, Turkey has ranked highest in the number of murders of trans persons in Europe—approximately 60 murders of trans people have been reported over the last ten years. “If they want to finish our activism, there is no other option left but to kill us,” Anjelik concluded.

Authorities have also retaliated. In 2015, the Istanbul Pride march was violently dispersed. All subsequent marches have since been banned. In 2017, under the guise of the State of Emergency, the Ankara Governorship indefinitely banned all LGBTI+ related activities, citing “social sensitivities,” “public health and morality,” and “protection of others’ rights and freedoms.” Ankara continued using the justifications to ban events despite the lifting of the State of Emergency in July 2018. Under this ban, an earlier version of the Pink Life Queer Fest film festival had also been repressed. Getting around these bans, organisers of LGBTI+ events defiantly moved some events underground or even to different provinces. The LGBTI+ community remained steadfast throughout this period and in April 2019 the Ankara Regional Administrative Court annulled the general ban.

Despite its lifting in Ankara, difficulties for the LGBTI+ community remain, including arbitrary crackdowns by police officers. Recently, Anjelik experienced an unannounced passport control at the grocery store, where they were “not to be allowed to go on the streets.” Eventually Anjelik was let go, but the repressive situation fuels imminent fear. “For us, the streets are full of gangsters in uniform,” Anjelik described. In addition to physical threats, the LGBTI+ community have also been facing judicial harassment. In November 2019, 19 members of the LGBTI+ Solidarity Platform of the Middle Eastern Technical University (METU) stood their first trial on charges of “participating in unlawful assembly or demonstrations” and “resisting despite warning or use of force.” Contradicting the regional court’s ruling on the ban, the METU rector prohibited the 9th METU Pride march organised on 10 May 2019. In defiance of the prohibition, the march still took place. Police entered the campus and violently dispersed the group of students, allegedly because they refused to leave the march. During the first hearing, the defendants stated the police violence started without warning and those who were taken into custody were beaten by the police. The next hearing will be in Ankara on 12 March 2020. As this case suggests, the pressure from society and authorities have fostered a suffocating environment in which the LGBTI+ community can never really feel safe.

Even though Anjelik is registered in different universities, their belief in academia as it functions in Turkey nowadays is close to non-existent. After the failed coup attempt of 15 July 2016, tens of thousands were fired from their jobs by decree (including Füsun Üstel and Cavidan Soykan, also profiled in this series). To Anjelik it meant losing the best, most critical teachers in a “witch hunt.” Anjelik compared the current universities in Turkey to the church schools in the Middle Ages. “There is hardly any critical thinking or knowledge production left, the main usage is a diploma which can help you to earn more in the working space,” they said. The space for critical thinking and questioning the patriarchal and hetero-normative norms in Turkish society have suffered as a result.

But time and time again the LGBTI+ community has responded to societal pressure and authorities-based repression with resilience and a determination to continue to defend their rights and the rights of any group whose voice the government has tried to silence—similar to the portraits of human rights defenders this series has shown. “We know there is one thing that we have that they [the authorities] don’t—and that is courage,” Anjelik stated. For Anjelik , life is resistance, and there is a lot to gain and discover, both personally and for wider society. “It makes me very happy not to know how I’ll define myself. Life is like an adventure, you don’t know where it is going to end,” Anjelik said.