On 11 March 2020, the World Health Organization declared that the COVID-19 outbreak had reached the level of a global pandemic. While United Nations Secretary-General António Guterres called on governments to take urgent action to stop the spread of the virus, with the understanding that such an exceptional situation would require extraordinary measures, he also called upon states to design measures in a way that would not disproportionally restrict rights and fundamental freedoms.

International organisations repeatedly reminded states of their obligation to ensure everyone is protected and included in the response to this crisis. Nevertheless, it was soon observed by human rights organisations and human rights defenders (HRDs) around the world that the pandemic was increasingly being used by many illiberal and autocratic countries as a justification to further restrict democratic space.

Turkey was one of the countries where the human rights record only worsened with the government’s response to the pandemic. While several HRDs were judicially harassed and targeted by smear campaigns for criticising the government’s response to the pandemic and the resulting further crackdown on civic space, the National Grand Assembly passed new legislation and amendments, including controversial legislation regarding the discriminatory nature of the execution of sentences; restructuring of Bar Associations; and countering the proliferation of weapons of mass destruction. The LGBTI+ community in particular was targeted by politicians and pro-government channels throughout the pandemic. All in all, the COVID-19 pandemic effectively worsened an already shrinking democratic space in Turkey.

Yet, this situation in Turkey has not been unique. HRDs around the world have faced new challenges under the often draconian and rights’-infringing measures imposed by governments under the guise of addressing the pandemic. In light of this unfortunate shared phenomenon, Hafıza Merkezi (Istanbul), Association for Monitoring Equal Rights (Istanbul), and the Netherlands Helsinki Committee (The Hague) organized a series of panel discussions, entitled, “Shrinking Democratic Space and International Solidarity,” inviting an HRD from Turkey to share experiences and lessons learned  with a counterpart from another country. The resulting discussions served as a forum where defenders discussed the common obstacles they face, exchanged how to overcome these, and built  international solidarity.

In the first event, the concept of shrinking civic space and its relation to rising populism and authoritarianism was discussed in the light of COVID-19. César Rodríguez Garavito of Center for Human Rights and Global Justice (USA) and Murat Çelikkan of Hafıza Merkezi (Turkey) discussed the overall trends throughout the world in this regard, as well as how Turkey fits in this overall picture. The second event featured Nighat Dad of Digital Rights Foundation (Pakistan) and lawyer Kerem Altıparmak (Ankara Bar Association), who discussed digital rights in Pakistan and Turkey. The third session hosted Karolina Gierdal of Campaign Against Homophobia (Poland) and Aylime Aslı Demir of KAOS GL (Turkey), who shared their experience of the increasing pressure and threats against the LGBTI+ community, which have only intensified in both countries throughout the pandemic. In the last event of this panel series, Alessandra Orofino of Nossas (Brazil) and Yaşar Adanalı of Center for Spatial Justice (Turkey) discussed how democratic space, participation, and activism were affected in Brazil and Turkey by the pandemic measures. 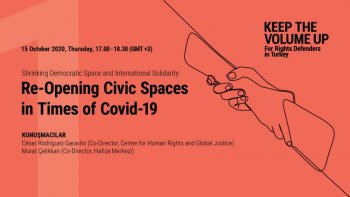 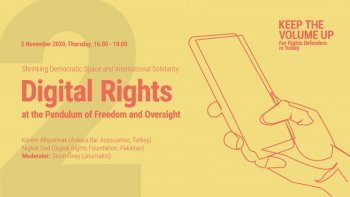 Digital Rights at the Pendulum of Freedom and Oversight 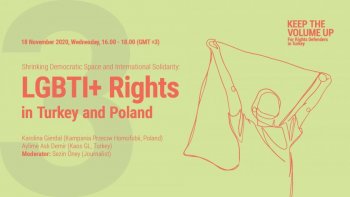 Shrinking the space of LGBTI+ rights activism in Poland and Turkey 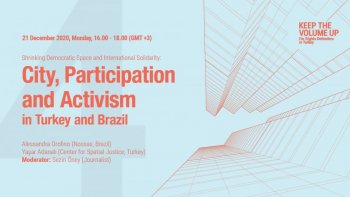 City, Participation and Activism in Turkey and Brazil