A controversial anti-LGBTI sermon stoked divisions within Turkish society, amidst the current COVID-19 pandemic, when solidarity is needed more than ever. In a Friday sermon on 24 April 2020, Ali Erbaş, President of Religious Affairs in Turkey (Diyanet), attacked the LGBTI+ community and people with HIV. Erbaş made discriminatory statements, including hate speech, and spread false information about the targeted group. Erbaş’s Ramadan sermon was quickly condemned by human rights organisations, bar associations, unions and opposition politicians throughout the country. The Ankara Bar Association accused Erbaş of “inciting the public to hatred and hostility.” 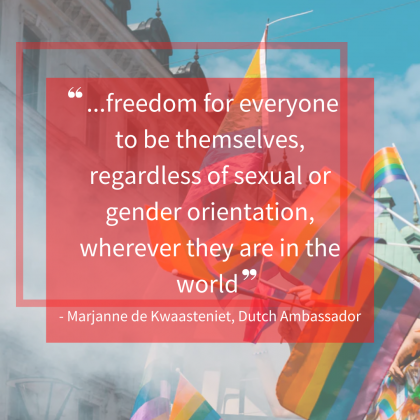 Instead of starting an investigation, government officials and other politicians endorsed Erbaş, with President Erdoğan stating that any attack on Erbaş amounted to an attack on the State. A spokesperson from the Parliamentary Human Rights Investigation Commission went so far as to say, “The future of humanity is only possible through legitimate marriages. The search for a path other than that will lead to ugly and indecent ways. The LGBTI+ lobby commands academia, politics, and media in many countries around the world, but we will not allow them on our own soil.” Hate campaigns continued during Lesbian Visibility Day on April 26, 2020.

Attacks from both sides

While the Ankara branch of the Human Rights Association launched a complaint against Erbaş for the anti-LGBTI+ speech, an investigation was launched against the Ankara and Diyarbakır Bar Associations, allegedly for “insulting the religious values adopted by a part of the people.”

This is not the first attack on the LGBTI+ community since the battle against COVID-19 started in Turkey. Previously, political entities systematically attacked people who hung rainbow paintings on windows to show solidarity with children during the quarantine. In response to another campaign entitled “Yallah Hollanda’ya” (“Go to Holland”), the Dutch Ambassador in Ankara, Marjanne de Kwaasteniet, responded “The Netherlands stands for the freedom for everyone to be themselves, regardless of sexual or gender orientation, wherever they are in the world #LGBTRightsareHumanRights #LGBTİhaklarıinsanhaklarıdır.” Opinion makers in the Netherlands compared the intolerance of the “Yallah Hollanda’ya” campaign to homophobic and supremacist thinking in the extreme political right.

The Netherlands Helsinki Committee condemns the exclusionary speech of the President of Religious Affairs. This speech is part of an ongoing attack on the LGBTI+ community by representatives of religious and political institutions on the LGBTI+ community and undermines fundamental democratic principles. Moreover, human rights defenders who speak out on behalf of targeted groups should not be criminalised. Thus, charges against the Ankara and Diyarbakır Bar Associations should be immediately dropped.

The NHC shares the stance of the UN Special Rapporteur on freedom of religion or belief who states that religious beliefs cannot be invoked “as a legitimate ‘justification’ for violence or discrimination against women, girls or LGBTI+ people. The right to freedom of religion protects individuals and not religions as such.”

Every government has an obligation to protect everyone from hate crime and discrimination. Public institutions should not be a part of any statements that encourage such discrimination, especially against minority groups.

The Winding Path to Democracy: Reflections on the Final RoLT Alumni Event