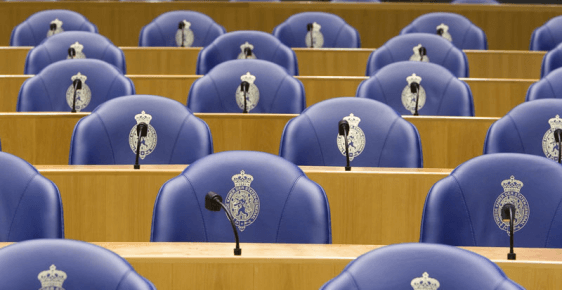 NHC Chairman Ian de Jong was one of the speakers at a round table discussion of the Dutch parliament on the rule of law in Europe. The discussion was organized on April 24 by the European Affairs Committee of the Second Chamber of Parliament. The NHC pleaded for stimulating the role of civil society in pushing for a full implementation of standards for the rule of law, for example with respect to judgments of the European Court of Human Rights.

The discussion was organized in preparation for parliamentary debate on the announcement of the European Commission’s new initiative to strengthen the rule of law in the EU. The report of the Netherlands Advisory Council on International Affairs (AIV) on EU rule of law mechanisms was also included in the discussion. Although these documents relate to the European Union, the NHC emphasized the leading role of the Council of Europe in rule of law standard-setting and verification of compliance with these standards. All European Union member states should play an active role in the Committee of Ministers of the Council, both when it comes to other EU member states and to non-member states. Stronger provisions for independent expert advice to the Committee should diminish the risk of politically motivated mitigation of mutual criticism.

Within the European Union, the Netherlands should advocate for existing institutions and mechanisms to be used more fully to foster the rule of law. There is no good reason to keep criminal justice matters outside the mandate of the Fundamental Rights Agency when EU regulations such as the European Arrest Warrant are squarely in the field of criminal justice. The EU Justice Scoreboard is flawed as long as criminal justice is not included. As the AIV notes, the European Commission can make active and strategic use of infringement proceedings as a way of promoting the rule of law (this point is also made by other NGOs, for example the Open Society European Policy Institute).

The addition of a ‘peer review’ system among EU members states, suggested by the AIV, runs the risks of falling prey to political maneuvering. The AIV proposal to include a strong component of independent and civil society input is a necessary condition to counteract such tendencies. Civil society could also play a role in the follow-up of the results of the ‘peer review’.

The notes drawn up by the NHC for the hearing are appended below. Parliamentary debate of the subject is scheduled for May 14.