In June 1993 the World Conference on Human Rights successfully closed with the adoption of the Vienna Declaration and Programme of Action. The Declaration is a landmark document in the global human rights movement that presented a common plan for strengthening human rights work. Then UN Secretary General Boutros Boutros-Ghali praised the meeting for creating a path towards, “a new vision for global action for human rights into the next century.” To mark the anniversary of the Vienna Declaration, the Austrian Embassy held a panel discussion in The Hague, which both commemorated the Declaration and looked at how the “new vision” of 1993 has panned out in the last quarter century. Representatives from the Austrian and Dutch government, and NHC Executive Director Pepijn Gerrits participated in the discussion, which took place on 14 May 2019. The event titled “Building Trust- Making Human Rights a Reality for All,” was hosted by Austrian Ambassador Heidemaria Gürer. 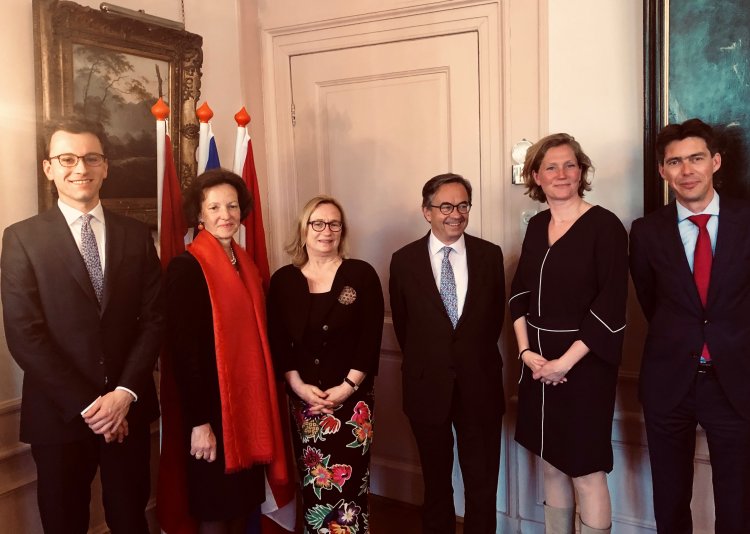 The need to mainstream human rights

The central message throughout the discussion was the need mainstream human rights. This was described by Gerrits as the need to “include human rights concerns and challenges in as many ways possible in as many contacts as possible,” and that, “[human rights] should be a baseline feature for all diplomatic and economic contacts.” The panel participants described reasons why mainstreaming human rights is necessary; namely because without human rights, other key aspects of a well-functioning society, e.g. peace, stability, or justice are not possible. Christian Strohal, former Director of ODIHR and member of the Security and Human Rights Monitor Editorial Board, recalled his experiences preparing and participating in the 1993 World Conference. He said the inclusion of Nobel Peace Prize Winners demonstrated the recognition by the organizers that “peace is contingent upon human rights.” Marianne de Jong, of the Dutch Ministry of Foreign Affairs reinforced this point, describing the Dutch government’s long-standing belief that “human rights are a precondition for stability.”

Working together for human rights: from honey moon to heading for divorce?

Elisabeth Tichy-Fisslberger, Austrian Ambassador to UN Institutions in Geneva, described the period surrounding the 1993 conference as “a honey moon period of multilateralism.” In that time, not only was there global recognition of the necessity for universal human rights, but also a willingness from all levels to cooperate and collectively pursue these goals. Strohal said that participants at the World Conference recognized the protection of human rights was a shared responsibility. He also noted the unique feature of the Conference, which allowed for a high level of input and participation of civil society representatives never before seen at such an international level. The acceptance of shared responsibility, willingness to work together and with all sectors (civil society, state, and private), and general feeling of hope surrounding the then recent end of the Cold War contributed to the (hard fought for) success of the World Conference: the adoption of the Vienna Declaration. In this period, in part due to the Vienna Declaration, a number of key steps to promote human rights took place. This includes the establishment of the UN High Commissioner for Human Rights and a Special Rapporteur on Violence Against Women, and calling for the universal ratification of the Convention on the Rights of the Child by the year 1995 (all countries other than the United States have ratified the convention). 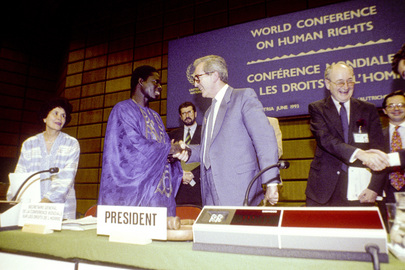 Conference Secretary-General Ibrahima Fall (left) and President of the Conference Alois Mock congratulate each other on the passing of the 1993 Vienna Declaration. photo c/o: United Nations

In today’s context, panellists explained, multilateralism and international cooperation is under increasing pressure. As countries stop working within the international system (e.g. ignoring the calls of international organisations), and as nationalism and populism receives more support from societies at the expense of the protection of fundamental rights, the pursuit of universal human rights seems increasingly bleak.

Strohal summarized what in his view are the three key challenges in the global human rights movement today:

The developments relating to new and shifting actors at the international level are also cause for concern in the global human rights movement, said Tichy-Fisslberger. The withdrawal of the United States from the UN Human Rights Council, the increasing impact of transnational corporations on the enjoyment of rights, and the growing prominence of countries that prioritize their territorial sovereignty over citizens’ enjoyment of fundamental rights were amongst the recent potentially problematic developments mentioned. Additionally, there is the question of which type of rights the international community should focus on; namely socio-economic versus civil and political. This has caused tension caused between groups that find themselves on differing sides of the argument, which in turn has contributed to the increasingly dire state of the human rights movement observed in the last few years.

incorporating human rights considerations in all relevant policy areas can transform it to “a real corner stone of international relations,” – Pepijn Gerrits

The way forward: making human rights a reality for all

Despite the negative trends, panellists reassured the audience that positive developments have also taken place. Recognizing that there has indeed recently been a “backlash towards the human rights movement” De Jong also said there was a recognizable “backlash to the backlash.” As global leaders increasingly call attention to the need to double-down on efforts to progress human rights, new forms of human rights work and cooperation are beginning to emerge. De Jong then presented one aspect that could help forge the way forward: changing the human rights narrative. She described the need for human rights needs to be communicated in a more human way. This means communicating about human rights in a way that increases the buy-in of people i.e. showing people that the human rights movement is not just about defending the rights of other people but defending your own rights.

In the end, the conversation came back to mainstreaming human rights. Communicating human rights in a more relatable and accessible manner can foster more active support at the individual level, and develop a global human rights culture. But also, incorporating human rights considerations in all relevant policy areas can transform it to “a real corner stone of international relations,” for which Gerrits argues.

The general outcome of the discussion was that in the twenty-six years since the passing of the Vienna Declaration, the common plan for strengthening human rights work the document presented is at risk. New challenges have emerged both within the human rights field, and more generally in international relations that have made multilateral and common approaches to solving the world’s problems less attractive to some in the international community. This backlash against the common pursuit of universal human rights must be met with a counter attack from all those from the public, private, and non-governmental fields, a new coalition of the willing must me created and galvanized to push the movement forward and make human rights a reality for all.