Şeyhmus Gökalp is a doctor who has dedicated much of his career to social causes. He has been legally targeted for a statement opposing the violence of the Turkish army, made by his organisation, the Turkish Medical Association. Sustained attention and a proactive strategy by the EU and its Member States is needed to defend Şeyhmus Gökalp and other human rights defenders and journalists in Turkey, from further criminalisation and reprisals for their work.

The portrayal of Gökalp’s experiences is a continuation of the series “Defending Human Rights in Turkey: Stories that Need to Be Heard,” told by Tan Tunali, with illustrations by Marco Lambooij. 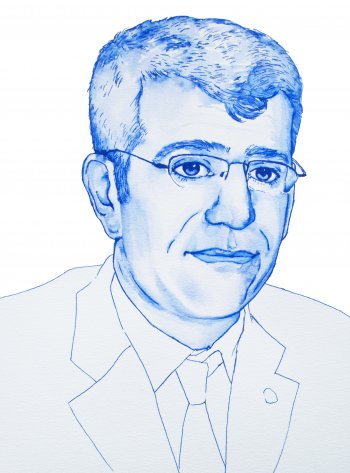 A water-colour depiction of Şeyhmus Gökalp

“May I kindly ask you to avoid overly dishevelling my house?” Şeyhmus Gökalp asked the anti-terrorism police as they raided his house on the morning of 30 January 2018. Gökalp had just made tea for his wife and daughters when the police barged in. Six days earlier Gökalp’s organisation, the Turkish Medical Association (Türk Tabipler Birliği, TTB), released a press statement opposing the launch of the Turkish army’s military offensive in the Syrian city of Afrin. “War is a human-made public health problem with effects of destroying nature and humankind,” read the statement of the Ankara-based organisation.

Little did Gökalp know that a statement, which opposed armed violence, would throw his life into chaos and leave him and his family’s future uncertain. Gökalp, who served as a council member of the TTB between 2014 and 2018, did not give the statement much thought when his organisation issued it. Throughout his career, he saw it as a medical professional’s duty to inform the public of the dangers of war. It was a view he shared with the Association, “We have always taken a stance against war, to benefit the public and society,” he said.

Growing up in a Kurdish family of seven in Nusaybin, a town on the border with Syria, Gökalp knew all too well the dangers of war. In his region, the Kurdistan Workers’ Party (PKK) and the Turkish army have been fighting a war for decades. The war peaked in the 1990s, and since the 2015 collapse of the peace process, violence has returned, threatening the lives of all those in the region. In the 1990s, his family moved to the eastern town of Izmir to flee the violence. Gökalp returned as a young adult, after gaining a place in the Medical Faculty of Euphrates University in Elazığ. During his studies, he spent time in prison for participating in anti-war protests. His story echoes the story of Raci Bilici, a human rights defender who also spent a considerable time of his student years behind bars.

Little did Gökalp know that a statement, which opposed armed violence, would throw his life into chaos and leave him and his family’s future uncertain.”

Upon graduation, Gökalp started working in a locally-supported project in Diyarbakır’s Bağlar district, where he provided free medical care to lower-income families. Throughout his career Gökalp has taken on socially oriented medical roles. In the last few years, he worked with people who fled the war in Syria and people who suffered from fighting in Diyarbakır. The historic city centre of Diyarbakır, where Gökalp used to work, became a war zone in 2015 when the peace process between the PKK and the Turkish state fell apart. “When I was going to work in the morning, I heard the sounds of shooting. The fighting was ongoing while I was giving people medication and treatment,” Gökalp said.

Like Academics for Peace (Read the case of Füsün Üstel), these doctors have been publicly targeted by Turkish President Recep Tayyip Erdoğan. They have been accused of treason and identified as “servants of imperialism.” The hostile atmosphere has led to threats and intimidation of all the doctors involved in the Association. On top of that, the Ministry of Interior and the Ministry of Health have launched an investigation into the doctors as part of a wider crackdown, which targets people that have been criticising the Turkish army’s operations in Afrin. Over 300 people, amongst them prominent journalist and human rights defender Nurcan Baysal, have been detained for social media posts, amongst other statements.

Gökalp quickly learned that the TTB statement would not only cost him his freedom, but his job as well. As he was taken into the Diyarbakır police station, he was told that he had been suspended from his job at the Diyarbakır Central bank, where he served as the resident doctor for the last eight years. From the police station, Gökalp and his colleagues were brought to the anti-terrorism unit in Ankara, where they spent several days in custody.

We have always taken a stance against war, to benefit the public and society,” – Şeyhmus Gökalp

In May 2019, more than a year later, the signatories faced a judge in Istanbul who handed down prison sentences to all eleven doctors. They were convicted for “provoking animosity and hatred” and for “terrorist propaganda.” Ten of them, including Gökalp, were sentenced to 20 months in prison. Hande Arpat was the only doctor to receive a higher sentence: 3 years, 3 months and 3 days. The doctors appealed the ruling and are currently awaiting the decision. It is not yet clear when the appeal hearing will take place.

The statement opposing violence, and its aftermath, have thrown Gökalp and his family into limbo. He is currently out of a job and the result of the court case could land him in prison anytime. The case put considerable strain on his life, he said, “I don’t say that to get pity for myself, but it’s just the reality we have to deal with in this country.” The arbitrary nature of the Turkish judicial system makes things even more uncertain and difficult. After he was released from pre-trial detention, Yiğit Aksakoğlu, portrayed earlier in this series, succinctly summarised the situation of Turkey’s justice system, “One: there is no justice, two: there is no system.”