Füsun Üstel, respected academic in history, nationalism and issues of identity, is the first of the Academics for Peace to be imprisoned for signing the “We will not be party to this crime!” petition. This ruling will likely influence the pending cases of other Academics for Peace. Despite the threat of imprisonment, Üstel stood up for her belief that condemning human rights violations or calling for peace is not a crime. Sustained attention and a proactive strategy by the EU and its Member States is needed to defend Füsun Üstel and other human rights defenders in Turkey from further criminalisation and reprisals for their work.

The portrayal of Üstel’s situation is a continuation of the series, “Defending Human Rights in Turkey: Stories that Need to Be Heard,” told by Tan Tunali, with illustrations by Marco Lambooij. 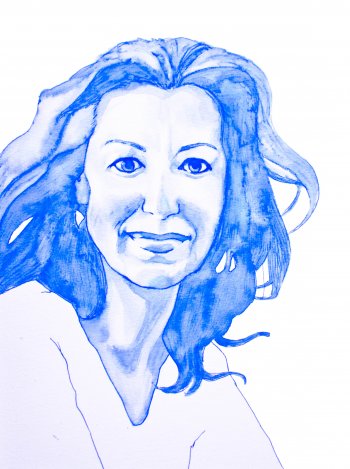 A water-colour depiction of Füsun Üstel

On 7 May, dozens of people gathered in front of the Cağlayan courthouse in Istanbul. Amongst them were academics, civil society leaders, but also Members of Parliament (MPs) and university students. They came together to bid farewell to political scientist Füsun Üstel. “Academics who want peace don’t belong in prison, but at university!” read a banner held by Üstel’s supporters when she took the microphone: “We are not where the words fail, we are at the beginning. We will continue to make our voices heard. As a citizen and as an individual, we will make our demand for a life in peace heard.”

The next day, Üstel submitted herself to the Women’s Closed Prison in the city of Eskişehir. A retired professor from Istanbul’s prestigious Galatasaray University, Üstel is one of over 2000 academics who in early 2016 signed a peace petition titled “We will not be a party to this crime!” (Bu suça ortak olmayacağız!). The signatories denounced the Turkish state’s violation of fundamental rights and of humanitarian law in the predominantly Kurdish Southeast region during the then-ongoing violent conflict between Turkish state forces and the Kurdistan Workers’ Party (PKK). The petition urged the Justice and Development Party (AKP) government to put an end to the violence. The military crackdown forced tens of thousands of people to leave their homes and round-the-clock curfews in many cities made daily life impossible.

We are not where the words fail, we are at the beginning. We will continue to make our voices heard. As a citizen and as an individual, we will make our demand for a life in peace heard.” – Füsun Üstel

The group of signatories, who came together under the umbrella organisation Academics for Peace (Barış İçin Akademisyenler), immediately faced harsh backlash. Turkish President Recep Tayyip Erdoğan targeted the academics in public speeches, accusing them of treason and of undermining the country’s security. In the aftermath of the coup attempt in the summer of 2016, many petition signatories were purged from their universities via emergency decree, some of them faced threats by nationalist students, and many left the country.

Turkish prosecutors opened investigations into the academics, who were then indicted for “terrorist propaganda.” Many of them were handed suspended prison sentences, meaning that in exchange for accepting guilt, defendants could avoid imprisonment unless they would be convicted again within a period of five years. Üstel was convicted to 15 months in prison, but refused the suspended prison sentence; she was unwilling to admit that signing the petition was a crime and instead appealed the decision. The sentence was eventually upheld by a higher court.

The decision to reject the suspended sentence and fight the conviction through appeal cost Üstel her freedom, but it was not a difficult decision for her. “I didn’t agree with the judge’s decision, so I appealed. I wouldn’t feel at peace with myself if I wouldn’t have appealed,” she said in an interview in late March. For Üstel, her age and retirement from teaching after the coup attempt influenced her decision to appeal. “It must be a generational thing. My generation has experienced the 1980s,” she said, referring to the 12 September 1980 military coup and subsequent widespread repression. At the same time, Üstel understands why many younger colleagues decided not to appeal. “They have families and wouldn’t be able to work in public service again. I always tell them, ‘don’t appeal, these days will pass.’ But for me it was a matter of principle,” she said.

colleagues regularly upload videos of themselves reading [Üstel’s] book. By doing so, they show that even though Üstel is imprisoned, her ideas and work are still being heard and disseminated.”

Üstel is the first of the signatories to serve time in prison, resulting in significant attention. “It brings along a big responsibility,” she said. “Especially for hundreds of other colleagues currently being persecuted.” Üstel might be the first signatory to be imprisoned, but she probably will not be the last. Recently, judges have begun handing down sentences over 24 months, rendering them ineligible for suspended prison sentences. This makes prison time for Üstel’s colleagues more likely. Her friend and co-signatory Tuna Altınel was arrested on 11 March. An Associate Professor in Mathematics, who lives and works in France, was arrested in the city of Balıkesir when retrieving information about restrictions on his passport. Like the others, Altınel is accused of “making propaganda for a terrorist organization.”

In addition to the gathering in front of the Cağlayan courthouse, Üstel’s looming imprisonment has led to an outpouring of solidarity. A week ago, she gave her final class called “In Search of the Convicted Citizen” (Mahkûm Vatandaşın Peşinde), hosted by the Turkish Medical Association (Türk Tabipleri Birliği). The title was chosen in reference to her landmark book “In Search of the Acceptable Citizen” (Makbul Vatandaşın Peşinde) and was widely attended by students, friends, several opposition MPs and journalists. At the end of the lecture, Üstel received a standing ovation. Üstel finds the support of her colleagues heartwarming. When she submitted herself to prison, other signatories from local universities were present to show their support.

Besides Üstel’s academic work, focusing on history, nationalism and issues of identity, she also has a long history of civil society work. Most recently, she served as a board member of the History Foundation (Tarih Vakfı), which aims to make historical knowledge more accessible to the public. When the university purges took place following the coup attempt, Üstel no longer saw a place for her at a university and decided to retire from academia. She instead wants to focus on a book she is working on.

To echo Üstel’s words in front of the courthouse “We are the beginning,” colleagues started reading her book “In Search of the Acceptable Citizen” on camera. On the website of the Academics for Peace, colleagues regularly upload videos of themselves reading the book. By doing so, they show that even though Üstel is imprisoned, her ideas and work are still being heard and disseminated.

UPDATE: Ten of the Academics for Peace, including Füsun Üstel, have a pending case in front of the Constitutional Court on whether their freedom of expression had been violated by their criminal convictions.

Find the whole series here: Defending Human Rights in Turkey: Stories that Need to Be Heard

UPDATE: On 22 July 2019, Üstel was released by the suspension of her sentence’s execution. On 26 July 2019, the Constitutional Court found that being prosecuted for signing a peace petition violates the right to freedom of expression. As a result, Üstel’s lawyers petitioned for her acquittal for the sentence of “making propaganda for a terrorist organization.” She was acquitted of all charges on 18 October 2019.