Meltem Aslan, co-director of the Hafıza Merkezi (Truth Justice Memory Center) in Istanbul, and one of Turkey’s prominent human rights defenders was taken into custody and interrogated in November 2018. Due to an imposed travel ban, continuing her international work in defence of human rights has become impossible. Growing restrictions and pressure on civil society also make the human rights work she does in Turkey increasingly difficult.

Investigated in relation to Osman Kavala’s case, and specifically the 2013 Gezi Park protests, Meltem Aslan is at risk of facing grave politically motivated charges, with uncertainty looming over her future. Sustained attention and a proactive strategy by the EU and its Member States is needed to defend Aslan, and other human rights defenders in Turkey, from further criminalisation and reprisals for their work.

The portrayal of Aslan’s situation is a continuation of the series, “Defending Human Rights in Turkey: Stories that Need to Be Heard,” told by Tan Tunali, with illustrations by Marco Lamboij. 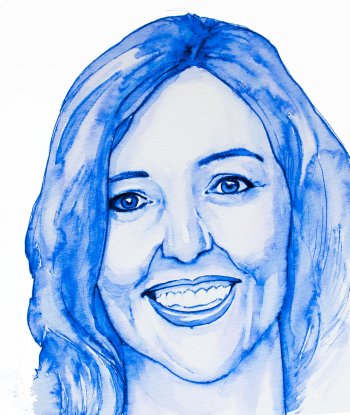 A water-colour depiction of Meltem Aslan

Meltem Aslan spent her teenage years in post-coup Turkey, at a time when the destructive military intervention of 1980 stifled political life. It is an often-repeated idea that the repression and fear of the period created an apolitical generation–an idea that has been proven false by the tireless work of human rights activists like Aslan.

Initially, Aslan pursued a career in business management and consultancy in the United States. After 10 years, she left the private sector and the United States, choosing instead to pursue her passion for human rights.

In the early 2000s, a scholarship for a Human Rights Degree at the European Inter-University Centre for Human Rights and Democratisation in Venice first led her to Europe, and then back to her home country, Turkey. She has been working for civil society organisations involved with human rights ever since. Between 2009 and 2018 she served as the executive director for Anadolu Kültür, an NGO that promotes dialogue and overcoming differences in Turkish society through the arts, promotion of cultural heritage, and intercultural and inter-regional exchange.

In 2011, while working for Anadolu Kültür, Aslan, along with a team of lawyers, journalists and human rights activists, set up Hakikat Adalet Hafıza Merkezi (Truth Justice Memory Center). The founders were motivated by a deep interest in applying a transitional justice framework when dealing with Turkey’s multi-layered past violations and injustices. The organisation documents cases of forced disappearances in Turkey, aiming to uncover the truth surrounding past violations of human rights, building a collective memory and supporting survivors in their pursuit of justice.

The organisation was developed in a period when Turkey began accession talks with the European Union (EU). Legal reforms being implemented during the accession process led to a vibrant and diverse civil society in the country. Since then the situation has changed dramatically. Fundamental rights such as freedom of expression have rapidly deteriorated and people working in civil society are targeted by the government. Aslan underlines that this crackdown is not just a Turkish phenomenon, but a global one.

According to Aslan, the EU shoulders a key part of the blame for the dire human rights situation in Turkey today. In what she calls “the mishandling of the refugee crisis,” the EU struck a detrimental deal with Turkey in March 2016. In return for the government’s prevention of refugees departure towards Greece, the EU paid €6 billion in support of refugees in Turkey. This widely criticized deal has provided Turkey with more leverage vis-a-vis the EU in contentious policy decisions, both domestically and internationally. Moreover, the deal has led to an erosion of human rights within the EU as well, thereby taking some of its own moral leverage away.

Osman Kavala, a well-known philanthropist, businessman, Chairman of Anadolu Kültür and supporter of Hafıza Merkezi, has become a symbol of Turkey’s deepening human rights crisis. A well-liked and important public figure who formerly advised western leaders on Turkey-related issues, he has now been in pre-trial detention without indictment for over a year. The allegations made against Kavala, accused of attempting to overthrow the government by organizing the Gezi Park protests, are likely politically motivated. Human rights activists around the world have characterized his imprisonment as an obvious attempt by the Turkish government to stifle dissidence. Meltem Aslan is among the individuals who regularly participated in solidarity gatherings demanding Kavala’s release.

On 16 November 2018, Aslan was briefly taken into custody, along with 12 other academics and civil society members. Shortly after the detention, police issued a statement criminalising the 2013 Gezi Park protests, suggesting that the ones taken into custody, together with Kavala, supported the protests with the intention to create chaos and to overthrow the Turkish government. The same police statement cited Aslan’s marriage “to a dissident journalist” – co-director of Hafıza Merkezi, Murat Çelikkan – as a point of investigation. All except Yiğit Aksakoğlu, Turkey Country Director for the Bernard van Leer Foundation, were released shortly thereafter (Read about the legal pressure Yiğit faced). Despite their release, investigations into those detained on November 16, and more who were summoned to the police station later for interrogation, continue.

Both the criminal investigation against her and her colleagues, as well as the general crackdown on civil society, leave many emotionally discouraged according to Aslan. While their work is more important than ever, it is often obstructed by growing difficulties. The lawyers working for Hafıza Merkezi, who would normally be working on the documentation cases of forced disappearances, are now forced to spend large amounts of time working on the cases against Aslan and other colleagues. She and her colleagues now spend significant amounts of time at courthouses in support of similarly beleaguered colleagues—time taken away from their own work.

The ever-mounting pressure on civil society causes wider ripples throughout the field of human rights activism in Turkey, including restrictions on funding and resources. In reaction to the crackdown on Anadolu Kültür, the Open Society Foundation decided to close its offices and withdraw from Turkey. Despite the personal and structural difficulties, Aslan, her colleagues, and many other human rights defenders and organisations remain committed to their principles and ideals of a society free of human rights abuses. They continue their work to build a peaceful and democratic country for all those who live in Turkey.