Building an Effective Probation and Alternative Sanctions System in Armenia

YEREVAN – Last week, NHC Executive Director, Pepijn Gerrits, Programme Manager, Koen Goei, and NHC Senior Expert Leo Tigges for Probation, visited Armenia to open a new project. A collaborative effort with the Civil Society Institute (CSI), the project involves Dutch experts working with civil society and the Armenian Ministry of Justice to build an effective and sustainable system of Probation and Alternative Sanctions in the country. The visit last week was the first of three expert visits planned as part of the project.

Working towards ‘concrete and tangible outputs’ in Armenian Probation:

Over the course of 2019, three week-long visits to Armenia will occur, involving two probation experts. Leo Tigges, formerly Secretary General of the European Confederation of Probation and Operational Director of the Dutch Probation Service, will be one of the experts on all three visits. In close collaboration with representatives from the Armenian Ministry of Justice and the Probation Service, and with on-the-ground-support from CSI, the experts will work towards three concrete and tangible outputs:

During the opening meeting, covered by the Ministry, the Deputy Minister of Justice for Armenia, Suren Krmoyan met with the delegation to discuss the importance of probation in maintaining the rule of law and human rights. Also present was Koen Goei, Leo Tigges, and Loes Lammerts, Deputy Head of Mission (Armenia) at Dutch Embassy in Tbilisi. 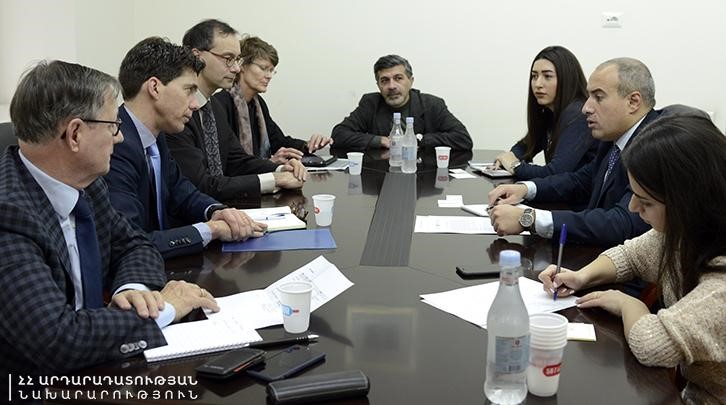 The NHC and CSI have previously contributed to the development of the Probation Service in Armenia, established in September 2016. On the request of the Minister of Justice, Tiggs visited Armenia in 2017 to assess and advise the Minister on further development of the Probation Service; which, despite important progress made in country, still face challenges such as a lack of resources, highly trained staff and capacity building.

In April 2018, Armenia’s new Minister of Justice, Artak Zeynalyan, decided to accelerate the development of the country’s Probation Service. The new project in Armenia is thus a response to a clear desire on behalf of the Armenian Ministry of Justice to see an effective system of probation and alternative sanctions established in Armenia. The new project will build on previous work on probation and alternative sanctions in Armenia by the NHC and CSI and, in particular, the valuable work carried out by Tigges in 2017, which formed the framework from which the above outlined objectives were drawn.

What can an effective system of Probation and Alternative Sanctions offer?

The NHC’s work in Armenia is reflects a commitment to the establishment of effective probation and alternative sanctions systems across the organizations area of operation in the EU and the OSCE. The benefits of alternative sanctions and probation – be it community service, conditional sentencing or electronic tagging – are clear and experienced by both society and individuals alike.

probation and alternative sanctions, which place an emphasis on rehabilitation, offers those convicted of minor and non-violent crimes the opportunity to avoid entering a cycle of crime and custodial sentences.”

Society’s across the globe incur high costs from increasing rates of incarceration, including custodial sentences for minor and often non-violent offences. Effective systems of alternative sanctions, reducing the number of actual ‘prisoners’ and reducing recidivism, have been proven to relieve fiscal pressure from high rates of incarceration. The community projects which often form the basis of community service sentences also benefit society as a whole.

From an individual standpoint, probation and alternative sanctions, which place an emphasis on rehabilitation, offers those convicted of minor and non-violent crimes the opportunity to avoid entering a cycle of crime and custodial sentences.

The Netherlands has one of the world’s oldest and most effective probation systems. The NHC is keenly aware of this and has, and will continue to, promote the sharing of expertise and best practice between Dutch experts and their counterparts in other countries. To this end, NHC experts are involved in a number of ongoing projects focused on probation and alternative sanctions. In 2018, officials from the Ukraine, Moldova and Montenegro took part in study visits to The Hague as part of these efforts, which fall under the organizations broader aim of securing the rule of law.