Probation: why and how – A must read for starting a probation system

The harms and unintended consequences of imprisonment are well documented. Today there are over eleven million people imprisoned worldwide, the highest number ever recorded, with ever increasing costs and no evidence of benefit for the wider community or those imprisoned. – Gerry McNally, President of the Confederation of European Probation (CEP)

Probation is a highly interesting and fast-developing field, covering a variety of sanctions and community-based measures, intended as an alternative to imprisonment and designed with community safety and the social inclusion of offenders in mind.

The NHC has been working to introduce and develop probation services across Eastern Europe since 2014, currently making great strides in Serbia, Montenegro, Ukraine and Armenia. Still, many countries continue to rely heavily on imprisonment to deliver justice, whereas there is abundant scientific evidence that criminal justice focussed on prison paves the way for reoffending once the offender is released. On the contrary, a focus on reintegration of the offender gives the lowest reoffending rates. Along with the University of Applied Sciences Utrecht (HU), the Center for International Legal Cooperation (CILC) and the Confederation of European Probation (CEP), we developed a brochure, both as an impassionate case for the introduction of probation and a how-to guide to its establishment. The 40-page document was designed as a useful tool for justice ministers, politicians and senior civil servants interested in setting up or upgrading a probation service. Read the full brochure and find out more below.

I warmly recommend taking note of this brochure as it explains why probation and other supervised sanctions and measures in the community are efficient, effective and value for money. They provide meaningful and effective alternatives to custody for most people who offend. – Gerry McNally, President of the Confederation of European Probation (CEP)

We must know about a service or a product to even start the journey of understanding. The formula is simple: first you know, then you understand, and then you can attach value. – Imants Mozers, Head of PR Latvia Probation Service (CEP 2021 Annual Conference in Prague)

When it comes to suggesting such big changes, like the introduction of probation in criminal justice systems that mainly use incarceration, explaining why the switch is beneficial, and to whom, is especially important. Being armed with solid reasons why probation should be implemented, interested civil servants and state employees will be able to make a better case for the changes suggested.

The brochure outlines how, according to the European Probation Rules, formally adopted in 2010 by the Committee of Ministers of the Council of Europe, the ultimate purpose of a probation service is to reduce reoffending, and thus contribute to community safety and the fair administration of justice.

The NHC was able to witness first-hand the benefits that an effective probation system has on society as a whole during the years we have worked together with our partners in Eastern Europe. 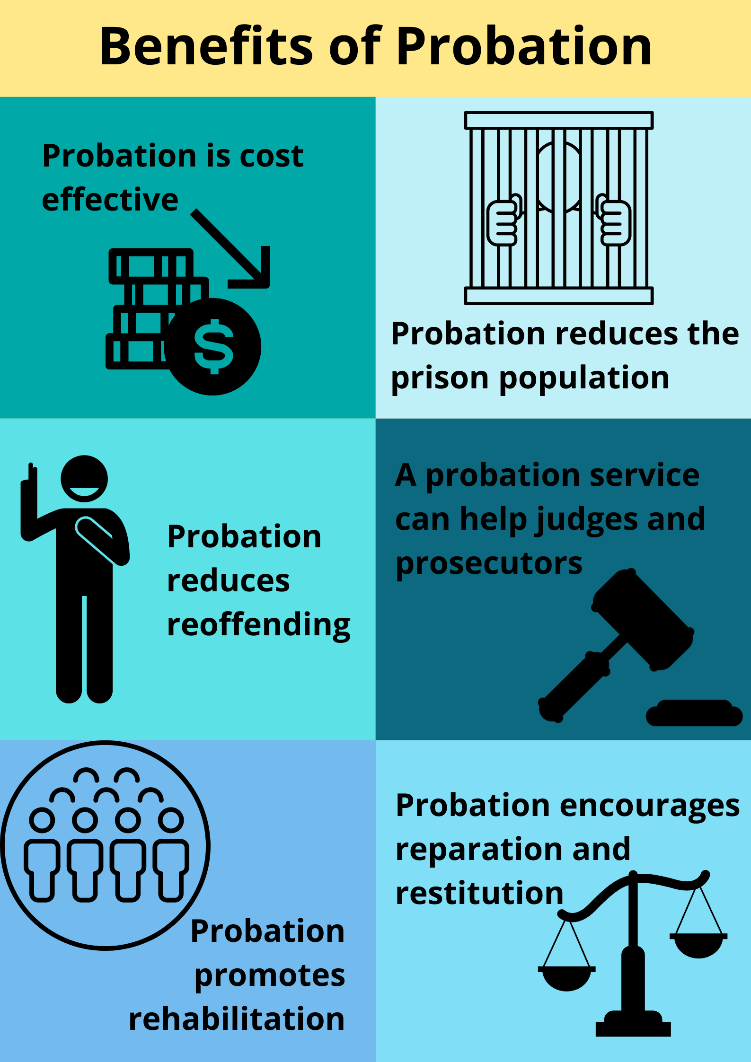 Probation lowers the costs of criminal justice, thus is cost effective. As the brochure notes, data from both a Dutch study and research conducted in England and Wales suggests that, on average, the cost of a community service order is about 10-12% of the total cost of a prison sentence.

Furthermore, detention is a disruptive experience for offenders, deepening the issues that may have caused the offending in the first place, cutting off contact with support networks and making care for mental/physical disabilities and substance abuse, among other things, unavailable or difficult. It should not come as a surprise that a community sentence like probation has an excellent track record of reducing the prison population and at the same time is linked to reduced reoffending. In a Dutch study, community service was found to lead to a 46.8% reduction in reoffending in the five years after the sentence.

At the same time, a probation service is a great ally to judges and prosecutors, by advising them in the pre-sentencing phase and promoting the use of non-custodial sentences.

Probation also promotes rehabilitation and encourages reparation and restitution. Since offenders will eventually re-join society, probation services can act as intermediary between the local communities and offenders, making the re-entrance easier on both sides. It can also enable restorative justice, by taking into account victims’ needs, increasing offenders’ awareness of their own behavior and facilitating mediation, among other things.

How do you build a probation system?

You don’t build a probation service overnight, you don’t build it in six years, but the good thing is when there is momentum, there is traction. That is when you can skip the “why” question. Koen Goei, NHC Programme Manager for Probation (CEP 2021 Annual Conference in Prague)

As the brochure outlines, for all the benefits mentioned to be fully realised, any country wanting to set up a probation service should have a clear strategy, involving several fundamental requirements: governance, sentencing, organization, skilled professionals, cooperation, international cooperation, communication with the public.

Overall, it comes down to making sure there is support for probation throughout society: support from political actors, from justice system actors – like judiciary, prosecution service and prison system staff – (reinforced by a well-grounded legal framework), and from the general public. Such widespread support can be only generated with a solid background, prepared probation officials and continuous and fruitful cooperation with the media, judicial services, health care services, educational, employment and social welfare services.

Most importantly, it is important to take note of the lessons that other countries who previously implemented probation can offer.

Read more about our probation success stories here and here.

This brochure is a helpful guide to anyone who is considering launching a probation service in their own country or region. Moving from the why to the how provides them with the tools they need to get all parts of their communities on board. In addition to this brochure, the NHC develops an auxiliary model with which a straightforward plan for a successful probation service can be designed. We are happy to share it with any interested parties that may contact us. – Koen Goei, NHC Programme Manager for Probation

About our Criminal Justice Reform Programme

We believe a criminal justice system focused on rehabilitation rather than punishment is better at contributing to safer societies. The Criminal Justice Programme promotes and supports criminal justice reform that works to ensure offenders are able to successfully re-enter society and do not re- offend. By providing tools and trainings to prison staff or probation officers, we help improve the implementation of justice. By bringing together high-level officials, policy experts, and seasoned practitioners from different countries, we contribute to the development of the most effective policies and practices. We also promote collaboration between different actors in the justice system, such as judges, prosecutors, probation, prison, and civil society organisations to ensure reforms pursued are effectively implemented throughout the entire system.