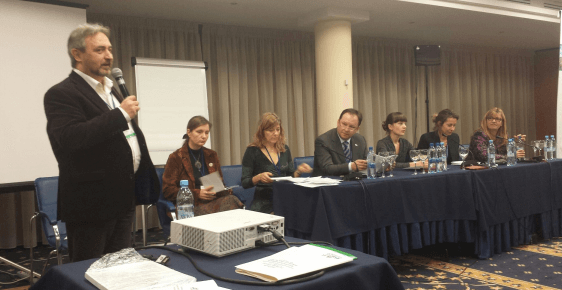 The OSCE should make combating torture a priority, said the OSCE Parallel Civil Society Conference held by the Civic Solidarity Platform in Kiev from 2 to 4 December 2013. The conference was held at the eve of the OSCE Ministerial Council meeting. The anti-torture appeal is the subject of the Declaration of Kiev, which together with a broad Recommendations document was handed over by Conference Co-Moderator Yuri Dzhibladze to Ambassador Prokopchuk, Permanent Representative of the OSCE to the OSCE.

The Recommendations document deals with a series of ‘human dimension’ issues, with the way the OSCE interacts with civil society, and has a special chapter on the performance on OSCE human dimension commitments of Ukraine as 2013 Chairman of the OSCE. Ambassador Prokopchuk responded by recounting the human dimension issues on which Ukraine had proposed draft decisions to the Ministerial Council: freedom of religion, OSCE action on behalf of Roma and Sinti, freedom of movement and security of journalists. [In the end, the Ministerial Council adopted decisions on the first two subjects; the latter subjects were – again – deferred.]

In the introductory session of the Conference, speeches and a discussion were held by a panel with Olga Zakharova, one of Civic Solidarity Platform’s conference organizers, Hanna Shelest of the National Institute for Strategic Studies in Odessa, Ukraine, Thomas Greminger, Swiss Ambassador to the OSCE, and Thomas Bieri of the Center for Security Studies (Switzerland). The theme of the panel was ‘How to increase comprehensive security as we approach Helsinki+40’. The term ‘Helsinki+40’ refers to the 40th anniversary of the Helsinki agreements in 2015; a process of evaluation of and discussion about OSCE operations is taking place in the run-up to the year 2015. In particular progress on mechanisms that do not require consensus from all OSCE participating States was discussed. Examples mentioned were self-evaluation on commitment with OSCE standards by future Chairmanships, or the issuing by participating States of open invitations for ODIHR monitoring of assemblies.

The conference was attended by over a hundred representatives of NGOs from around twenty countries in the OSCE region. The Netherlands Helsinki Committee was one of the organizers. Ukrainian NGO Centre for Civil Liberties dealt with the organization on the ground, a tremendous task as it was done in parallel to work on behalf of Kiev demonstrators affected by police and prosector repression.