Threat of severe deterioration of human rights compliance in Ukraine 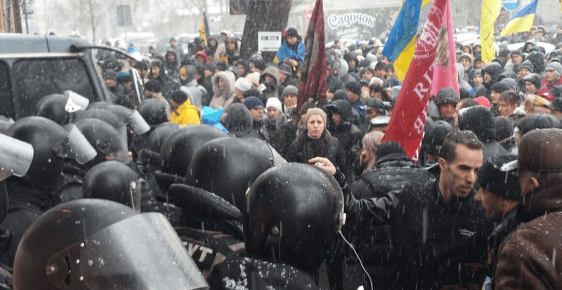 The Civil Society Parallel Conference, held in Kiev from 2 to 4 December by the Civic Solidarity Platform, issued an urgent call on the human dimension situation in Ukraine. Of particular concern was the brutal beating of peaceful demonstrators in the centre of Kiev in the 30 November / 1 December night. These actions by law enforcement troops violated both Ukraine’s Constitution and Ukraine’s international obligations and OSCE commitments related to freedom of peaceful assembly, freedom of expression and prohibition of torture and other cruel treatment.

A special session on Ukraine listened to testimonies on targeted beatings of journalists, camaramen and photographers, of which a total of 52 cases have been documented. These beatings were denounced by the Representative of Freedom of the Media of the OSCE, but broader action should be taken by the OSCE with regard to Ukraine, the Parallel Conference stated. Permanent observation should be put in place of Ukrainian compliance with OSCE commitments, in particular of its policing of demonstrations. ODIHR, the human rights and democracy office of the OSCE, has developed detailed guidance on securing the right to peaceful assembly, and a refined methodology for the monitoring of assemblies.

The special Ukraine session also addressed other rights issues in the country. Progress has been made in the modernisation of legislation in a number of areas. Law enforcement practice still needs heavy reforms however, in particular the way police deals with suspects and other members of the public. Harassment and intimidation of citizens by officials through non-judicial means also remains a concern. The main Recommendations Document of the Civic Solidarity Platform contains a six page chapter on Ukraine.

At the meeting of the Ministerial Council of 5 – 6 December, many of the ministers present made reference to the current events in Ukraine. The outcome of the meeting however did not specifically refer to Ukraine. “It would have been very appropriate for the meeting to adopt a specific decision on security of journalists,” said Harry Hummel, who represented the NHC as observer at the Ministerial Council. “A draft decision on this subject has now been before for the meeting for a number of consecutive years, and it is high time that it be adopted.”