Recently, the participants of the Matra Rule of Law Training Programme (Matra RoLT) ‘Human Rights and Minorities’ returned to their home countries, respectively: Serbia, Albania, Bosnia and Herzegovina, Georgia, Ukraine, Moldova, Macedonia, Montenegro and Kosovo, after an intense 10 day training programme. This programme was organised by the Netherlands Helsinki Committee, Leiden University and The Hague Academy for Local Governance.

Now that the training has been concluded, participants and a lecturer have been asked to reflect on the programme. What lessons have been taught and what has been learned? How will the programme stimulate possible improvements and change? 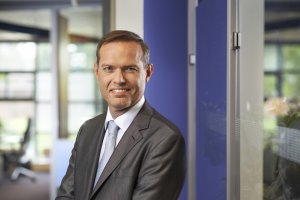 One of the trainers of the programme was Dr. Jan-Peter Loof, vice-chair of the Netherlands Institute for Human Rights and senior lecturer in constitutional law and human rights at Leiden Law School. He has given the participants an overview of the human rights infrastructure in the Netherlands. During his presentation, Dr. Jan-Peter Loof shed light on the way human rights compliance is secured and on the procedures that are involved in this process. In addition, he taught the participants which existing independent watchdog bodies are part of the constitutional framework in the Netherlands, what their competences and mandates are, what power they hold, and how their (financial) independence is guaranteed.

“I have tried to teach the participants something about the ‘legal culture’ that is needed in order to protect and promote human rights. The procedures of independent and impartial courts, ombudsmen, equality bodies or national human rights institutes are very important. However, the best guarantee to prevent human rights violations is a structure and the right mindset within the government apparatus itself. Thus, relevant human rights standards are part of the framework all policy initiatives should refer to.” 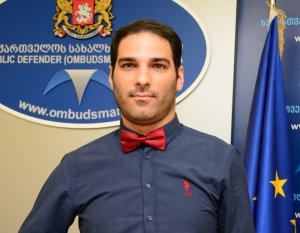 Mr Saba Pipia was one of the participants of the training programme. In Georgia he works at the Ombudsman Office. Mr Pipia is very enthusiastic about the programme. The theoretical knowledge of Dutch laws and regulations that were discussed during the programme has given him better insight into the judicial system in the Netherlands. Furthermore, he found the passion of the speakers inspiring.

A highlight for him was the visit to the National Institute of Human Rights in the Netherlands. During the visit, the participants learnt more about the external monitoring of the human rights’ situation in the Netherlands and how to deal with discrimination and individual complaints.

Most striking to him was the fact that the Dutch Parliament serves as the primary protector of human rights and fundamental freedoms in the country. According to Mr Pipia, many things need to be changed in order for the Georgian Parliament to obtain such a role as well. It is, however, fundamental that the Georgian Parliament follows in the footsteps of the Dutch. The parliaments in the countries where the participants come from are in urgent need of empowerment in order to build capacity and duly represent the people. Public trust in the judicial system and other public institutions is the cornerstone of the rule of law and democracy. However, such trust is often lacking in the countries the participants of the programme come from.

Georgia has many challenges with regard to human rights compliance and gender equality issues. The country is a transitional democracy and currently strives to achieve full democratic governance. Strong gender stereotypes and prejudices still prevail. In addition, women are underrepresented in social and political life and their economic power, access to education and healthcare are not guaranteed in Georgian society.

Mr Pipia expressed how he would like to contribute to improving these issues in his country. Lastly, he mentioned the value of the encounter with others and the useful connections the training programme has facilitated.

“Next to all the intellectual activities, there were social activities in the evenings. These were very useful as friendships and good relationships have been forged during these leisure activities. The participants have been able to bond. Thus, bridges have been built and valuable connections were created.” 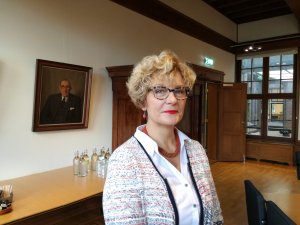 Mrs Sevima Sali-Terzic was one of the participants of the training programme as well. In her home country she works as a Senior Legal Adviser at the Constitutional Court of Bosnia and Herzegovina.

She also appreciated the informative presentation on the implementation of the Convention on the Rights of Persons with Disabilities of Evert Verkade of the Ministry of Health, Welfare and Sports. However, on a more critical note, she would like to suggest to include more practical measures that have been undertaken by Dutch authorities to achieve better inclusion of persons with disabilities in everyday life.

Furthermore, Mrs Sali-Terzic would like to see change in the actions plans of the authorities in the countries where the participants come from. These action plans are often not very operative. The language used in the plans is often a bit vague. Whereas it should, according to Mrs Sali-Terzic, be more concrete.

“During the training programme there have been good discussions on gender policies. It has been interesting to compare Dutch experiences with those from the participating countries. Even solid democracies like the Dutch one, continuously have to work on their human rights compliance. Nonetheless, it is still encouraging to see the respect for human rights in the Netherlands. In the countries where we as participants come from, the process of, for instance, gender mainstreaming is relatively slow. This is something we need to continue to work on. The Matra RoLt training programme has given us the right tools to continue crucial endeavours in this field.”