Roundtable in Moldova on conditional release

On 9-10 June a roundtable on conditional release and social reintegration of detainees was held in order to explore effective ways and tools for the inter-institutional cooperation between probation and penitentiary systems in Moldova. Probation and detention systems professionals, judges, prosecutors, civil society representatives, and experts from Georgia, Latvia and Romania discussed the current situation and the shortcomings of the rehabilitation process of former detainees.

The conclusions and proposals developed during the roundtable were presented to the Moldovan Ministry of Justice that, in turn, confirmed its willingness to support them.

The proposals are as follows: 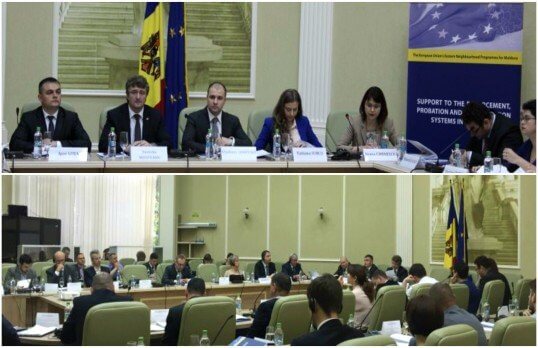 This event marked the latest activity of the EU-funded project “Support to the Enforcement, Probation, and Rehabilitation Systems in Moldova”, aimed at improving the connection between intramural and extramural care. The project that links up Moldovan enforcement, probation and detention professionals with their peers from abroad has been implemented in Moldova since October 2014 by the Netherlands Helsinki Committee, the Center of International Legal Cooperation (CILC) together with its partner organisations the Penal Reform International, Deutsche Gesellschaft für Internationale Zusammenarbeit, and the Institute for Penal Reform.