A number of human rights NGOs condemned the intensification of police violence in Armenia, associated with allegations of ill-treatment and torture inflicted upon Armenian peaceful protestors. Armenians rallied against the police in support of an armed militant group that seized a police station in Erevan on July 17, demanding regime change and the release of all political prisoners. 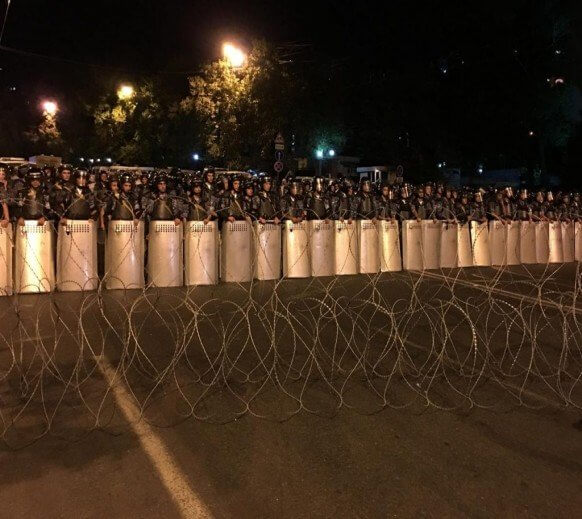 The response of the police was swift and brutal. As the International Rehabilitation Council for Torture Victims (IRCT) reports, they used disproportionate force during the protests, beating the demonstrators and throwing stun grenades at the crowd. Additionally, allegations of people being tortured while being held in police custody surfaced along with other reports of human rights violations.

Human Rights Watch also documented police violence committed against journalists, including destruction of their equipment and use of force. Some reporters condemned such actions as “a deliberate attack on journalists.”

The Head of the European Affairs office of the IRCT, Mushegh Yekmalyan, stated that ill-treatment of suspects by the Armenian police is a long pressing issue: “Sadly the situation in Armenia is not new. Numerous reports by the European Committee on Prevention of Torture (CPT) have provided evidence of ongoing torture by the Armenian police, also before the current protests started. Despite decades of police reform funded by the EU, OSCE and other regional and international organisations, this is a clear indication that torture is a systemic problem that has not yet been eradicated in Armenia.”

The Armenian capital has been consumed by protests for the fourth time in a row: starting from 2013, summer protests unraveled in reaction to public transportation price increase, pension reform, and higher electricity bills. However, the recent protest is more radical in its nature and calls for the overhaul of the political order. Despite that, the European Court of Human Rights postulates that governments should operate in a climate of tolerance and respect even during the demonstrations that are deemed unsanctioned or illegal.

Both the police and Armenia’s Special Investigative Service announced investigations into police actions. NHC will continue to monitor the situation closely, hoping that further investigation will hold the right people accountable for the violence.