Russia’s Departure from the Council of Europe Should Be Avoided

Human rights defenders from Russia are calling on the Council of Europe to reinforce efforts to address deteriorating relations with the Russian Federation. Dozens of individuals from Russian civil society have signed a memorandum to this effect. The EU-Russia Civil Society Forum, of which the Netherlands Helsinki Committee is a member, has endorsed the memorandum. The network echoes the call to work towards de-escalating the situation. The call comes despite increased tensions in the wake of Russia’s seizing of three naval vessels in the Kerch Straight in November 2018.

Since joining in 1996, the relationship between Russia and the Council has been strained; the organization has often criticized Russia for failing to uphold human rights. Since Russia’s annexation of the Crimean peninsula in 2014, relations have gotten much worse.

The crisis has reached the point where Russia’s withdrawal from the Council of Europe, either through expulsion or at its own volition, is a real possibility.”

In response to the annexation, the Russian delegation to the Parliamentary Assembly of the Council of Europe had its voting rights stripped. Russia has since responded through political pressure and by the suspension of monetary contributions to the Council, worth €33 million per year. The crisis has reached the point where Russia’s withdrawal from the Council of Europe, either through expulsion or at its own volition, is a real possibility. Russia could choose to withdraw as soon as the next Meeting of the Committee of Ministers in Helsinki, scheduled for May 2019.

The memorandum published by Russian human rights defenders makes it clear that such a situation would have profound consequences for human rights in the country, the stability of the surrounding region, and Europe as a whole. 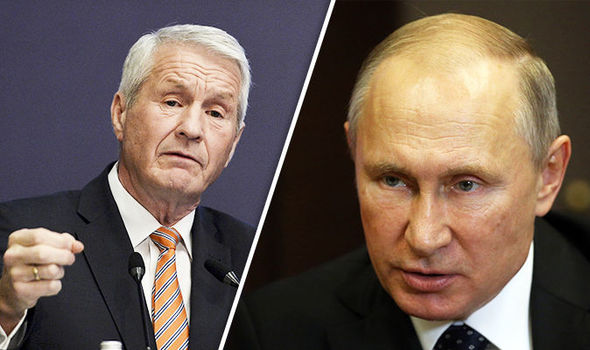 Thorbjorn Jagland, Secretary General of the Council of Europe, warns Russia leaving the council will be a step back for Europe. photo c/o: Getty

Russia’s withdrawal would be a huge blow to human rights and stability in Europe.

Since Russia joined the organization and ratified the European Convention on Human Rights, the European Court of Human Rights has served as a source of hope for millions of Russian citizens seeking justice for human rights violations. Amongst member states of the Court, Russia leads in the number of suits submitted against it. Since 1998, 2,500 judgements from the Court on Russia have been delivered and  in 2017 alone, the state paid over €14.5 million in reparations as a result of the Court’s decisions.

The immediate impact of Russia’s departure from the Council would be felt most not by the Kremlin, but rather by the Russian people.”

Russia’s departure from the Council would deny Russian citizens protection and justice provided by the Court—worsening human rights in the country. It could end effective legal guarantees for asylum seekers and refugees and open the door for the reinstatement of the death penalty. If human rights are to be upheld in Russia, the Kremlin and its policy-makers must be engaged. The Council of Europe is the best mechanism through which to do so.

Russia’s withdrawal could also have disastrous implications for the region and Europe as a whole. It would result in a lack of protection provided by the Convention and the Court for inhabitants of Russian-controlled Crimea. It would remove levers for continued political and legal pressure on Russia over its aggressive operations in neighbouring countries. Even more worryingly, it could trigger the withdrawal of further member states from the Council in a context where human rights in general is already backsliding across the region.