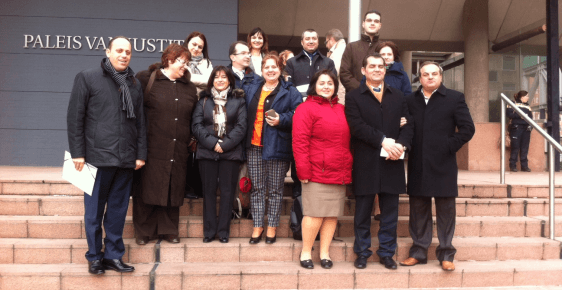 From 26 January until 30 January, an Albanian delegation visits the Netherlands for a study visit in the framework of the Matra CoPROL project promoting a victim-centred approach in trafficking cases. Each day, participants of the study visit will write a blog for the NHC about their experiences. You can read here about their first day.

The Albanian delegation, composed of judges, prosecutors and academics, concluded the first day of their training session in Netherlands. The day began with an overview of the Dutch judiciary system, introduced by ms. Ymkie Lugten (policy adviser international cooperation at the council for the judiciary). The participants got very interesting information on the judiciary system in Netherland and enjoyed her readyness way of presentation, especially on the functions and role of the Council for the Judiciary. The participants reflected on the differences and similarities of the respective systems in the Netherlands and in Albania. They got informed on the perspectives on judiciary reform in the Netherlands and on the importance of international cooperation in justice matters. The delegation was interested to hear about the recruitment system of the judiciary as well as on the standards of independence and impartiality of the Dutch judiciary.

The afternoon session showed to be very informative for the participants as well. The head of the bureau of the National Rapporteur on Human trafficking and sexual violence against children, mr. Maarten Abelman astonished everyone with his eloquent way of lecturing as well as his smart didactic techniques of giving a huge amount of information on a relatively short period of time. He managed successfully to cope with many questions coming from all directions. The participants were not familiar with the works of a National Rapporteur on Human Trafficking, but mr. Abelman made its role and nature very clear to everyone. He also introduced some new forms of trafficking of human beings in Netherlands and tried to explain the Dutch concept of trafficking as not merely related to the movement of people from one place to another but especially to the exploitation of human beings as such.

After the afternoon session the delegation tried to make some exploration of the city travelling around and enjoying its beauty and peacefulness.

We spent Tuesday 27 January at the Court of Justice in Hague. The first meeting was hosted by Ms. Anouk Paulus who is an Advocate General. She spoke on the organization of the Prosecution Service in the Netherlands. We learned that there are 12 prosecution offices in the Netherlands. There are 10 district offices and 2 National offices. The participants were interested to hear about the division of work between police and prosecution and the coordination between the prosecution office and other investigative units on financial or social work issues. The second meeting was hosted by Mr. Warner ten Kate, who is the National Prosecutor for Human Trafficking and People Smuggling. What was striking for us was the exploration of the Dutch Prosecution Office of classic and new forms of investigation and the establishment of a multi sector approach for the identification of Human Trafficking, the so called multi barrier system, which includes many actors (such as border police, local government authorities, labour offices etc.). He also underlined the importance of international cooperation through the international and EU legal framework. In the afternoon we attended a few minutes of a human trafficking case, heard by the Appeal Court in Hague. We attended a presentation on the sentencing in Human Trafficking cases by Tamara Trotman, a judge in the Appeal Court of the Hague. She explained that the Dutch Criminal Code provides only for maximum sentences and provides no minimum level for convictions in the country. The Dutch National Raporteur has asked for the realization of Points of Referral for the judges on how to weigh every element of crime in a human trafficking case. This would be the task of the Advisory Board for Criminal Law which is a body of judges that would try to roient the judicial practice based on previous case law analysis.

On the third day the Albanian delegation paid a visit to SPOT, the Centre for Information and Advice for sex workers in Hague. In the morning session, the Albanian delegation had a very interesting presentation on the work of Comensha (National Coordination Centre on the Trafficking of Human Beings) hosted by Ms. Anna Sarbo (consultant Human Trafficking at Comensha). She informed us about the main task of the centre and their international sister organization: “La Strada”. For this delegation it was very important to get informed about the coordination of the care between different shelters in Hague. A very important part of the care is the information that they provide to the victims (or possible victims), about how they can work safely in the sex industry. During her presentation Ms. Sarbo presented some statistics on the victims of human trafficking in the Netherlands.

The presentation of the Hague Police representative, Ms. Ilonka Szapora, was also very important for Albanian delegation. They knew how important the training of police officers is in human trafficking and it was interesting to hear that only certificated police can collect evidence of human trafficking that is permissible in court. The participants were also interested to hear about the “negative working advice”, which is a particularity of the police of Hague.

In the afternoon the group went to Amsterdam for a guided tour through the “Red Light District”. Ms. Mariska Majoor gave an overview of the work that is done by the Prostitution Information Centre in Amsterdam. It was interesting to hear from an ex sex worker how the legalization of the prostitution affected her work and how important it is to: “Respect Sex workers all over the world! ”

The day finished with a tasty dinner and very beautiful and relaxing boat tour in Amsterdam.

In the 4th day of the study visit, the Albanian delegation visited the Dutch center for training judges (SSR). During this visit, the participants got the chance to get to know the work of SSR, with regard to the initial and continous training of judges and prosecutors in the Netherlands. The first session started with a short presentation by Mr. Leon Plas, regarding the initial training of prosecutors and by Ms. Anne Tahapary, regarding the initial training of judges. During these presentations, there was an interesting exchange of experiences between the Dutch trainers and the representatives of the school of magistrates in Albania. This exchange created a possibility for the participants to point out the differences and similarities between our systems for training judges and prosecutors. The fact that every candidate had a personalized training program was very interesting for us.

The day continued with a presentation from the Albanian trainers, regarding the way THB trainings are conducted in Albania. Mr. Sander Simoni (judge) and Mr. Henrik Ligori (prosecutor) presented the main issues that are discussed in THB trainings. Both Albanian trainers mixed theoretical elements with a case from practice during their presentation, drawing the attention of participants.

The afternoon session started with the introduction of several important elements regarding the didactical skills of the trainers. The skills of the Albanian trainers were also tested, focusing on elements that every trainer should take in consideration. The application of a “needs analysis”, the pyramid of training elements and the short duration of web-lectures were very interesting points.

The second part of the afternoon session, was focused on the trafficking of human beings for the purpose of labor exploitation. The presentation of Mr. Rob Pauman was very appealing to the participants, since this form of exploitation is not found in the Albanian in judicial practice.The participants highlighted the contradiction which exists in Albania between the lack of criminal cases regarding labor exploitation and concrete cases of bad working conditions. In this framework the Dutch experience was not only very interesting but also helpful for the every day work of judges and prosecutors, who participated in the study visit. 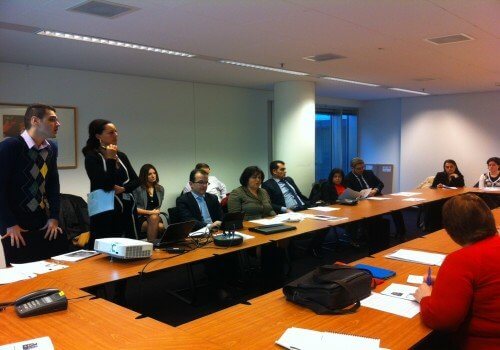 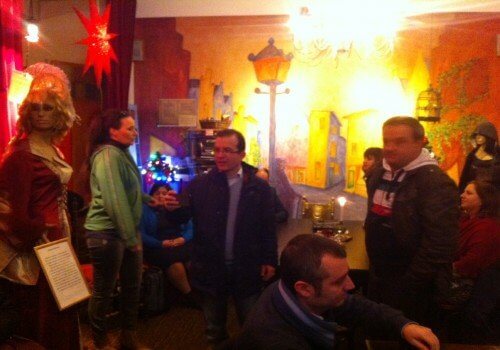 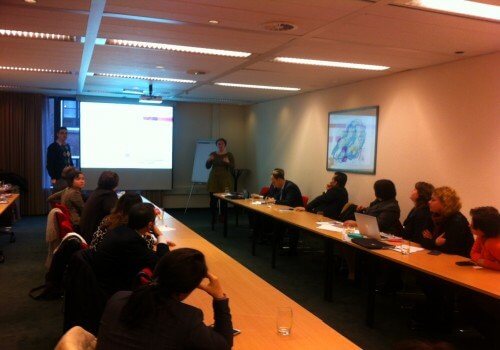 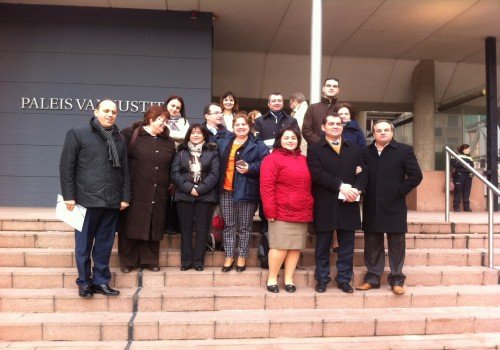