Outgoing and incoming NHC Supervisory Board members Angela Kaptein and Tamara Trotman discuss their vision for the NHC in this interview.

Interviewer: Thank you both for taking the time from your busy schedules and agreeing to this interview. Angela, back in 2018 when you joined the NHC Supervisory Board, you mentioned your vision/motivation to become a member of the Supervisory Board was an “appreciation of the professional goals and dedication to the mission of the NHC – a small but effective NGO stimulating for a better (and therefore more just) world”. Looking back on that initial motivation, what would you say that you found most stimulating about being a NHC board member?

Angela Kaptein: It is interesting to read my own words from back then. I would say that is was a very stimulating experience in general. I thoroughly enjoyed working with dedicated people who always keep going and who never give in, even under difficult circumstances. Everyone at NHC, both staff and Board, is very motivated. And it was great to work in such a diverse team as well, with people coming from very different backgrounds.

Interviewer: And Tamara, what is your vision for the NHC as a Supervisory Board member?

Tamara Trotman: I have known NHC for years and have worked together with the organisation on a criminal justice reform project (“Strengthening the probation and the system of alternative sanctions in Montenegro and Serbia”). It is stated on the NHC’s website that NHC is “recognised as one of the key non-governmental organisations contributing to dialogue and cooperation amongst actors in the areas of rule of law and human rights”. That is exactly the type of organisation I find important to support especially in these times as the Rule of Law has come under pressure in so many countries. I feel a moral duty to do my part and help to try to turn around this downward spiral. Of course as a member of the Supervisory Board you should never step into the shoes of the Director. You have to strike the right balance between involvement and distance. I am really looking forward to the interaction with my fellow Board members and the Director, and hope to meet with NHC’s staff members in the (near) future. I find it a privilege to be able to take part in strategic discussions on how NHC’s position can be strengthened and how meaningful steps can be taken furthering our goals.

Interviewer: Angela, you have a strong connection with the NHC ‘s work on building and maintaining a society in which the position of the individual citizen is safe and where he is sure of his rights as to the government or power in his country – not only on paper, but in reality and in daily life. Could you highlight a project, programme or activity of the NHC during your time as Board member that particularly stood out for you in this regard?

Angela Kaptein: The work the NHC does may not always be concrete in the sense of measurable results. But: there is a definite sense that by being present, by starting the difficult conversations, and by exerting (diplomatic) pressure, we contribute to improving the situation on the ground. It is not an easy job. Together with the NHC, I was involved with some difficult conversations in Azerbaijan and Kazakhstan on issues of accountability and the independence of the judiciary, and rule of law. As a judge, it was particularly is vital that I remained independent in all discussions. While these were by no means easy conversations to have, we have to keep trying. We may not always make friends in our line of work, but most important is that we believe in what we do, and keep going. 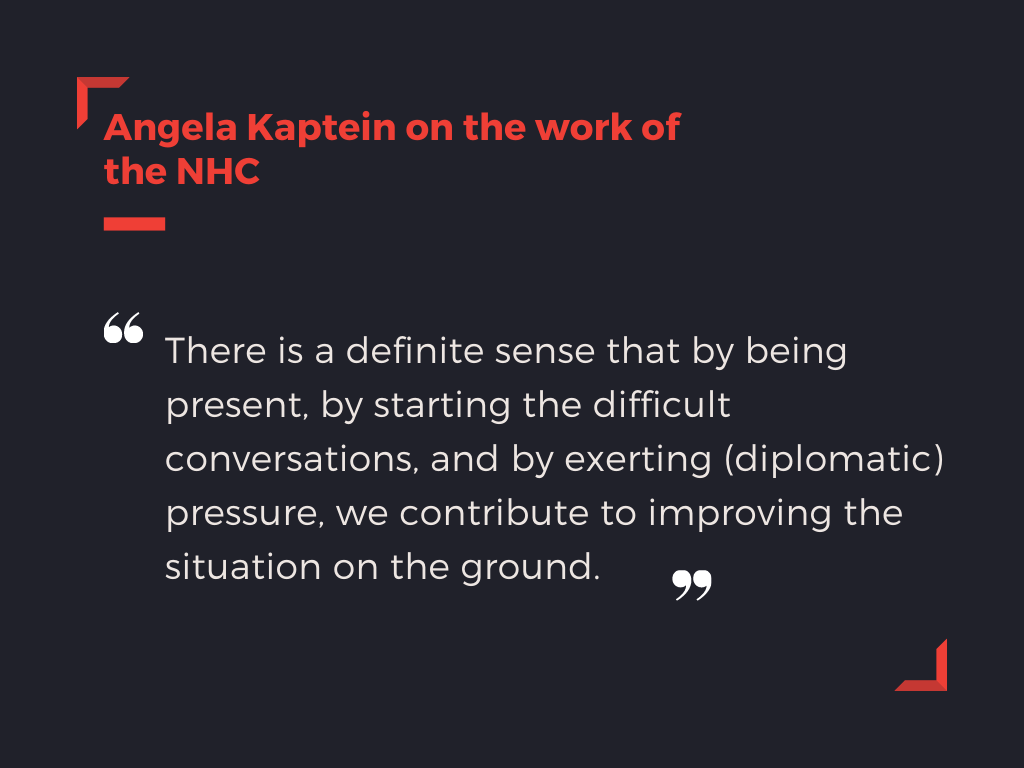 Interviewer: Tamara, what makes the NHC’s mission powerful to you?

Tamara Trotman: In your own words, “NHC work is aimed at contributing to a world in which citizens across the OSCE area peacefully live in more open and just societies.” What’s not to like? I find it important never to become cynical. Therefore one of my favourite quotes is one by Václav Havel:

Hope, in this deep and powerful sense, is not the same as joy that things are going well, or willingness to invest in enterprises that are obviously headed for early success, but, rather, an ability to work for something because it is good, not just because it stands a chance to succeed. – Václav Havel

Interviewer: Following on from that, what interests you most about the NHC?

Tamara Trotman: As a criminal law judge and former defense lawyer obviously the NHC objectives ‘transformative criminal justice’ and ‘improved access to justice’ are closest to my professional area of expertise. Living in a democracy under the rule of law is never a given, it is always work in progress. There is no quick fix for transforming societies into such a democracy. What I therefore find interesting is NHC’s holistic approach in strengthening the rule of law, safeguarding human rights and strengthening civil society and appealing to governments, NGO’s and citizens alike.

Living in a democracy under the rule of law is never a given, it is always work in progress. There is no quick fix – Tamara Trotman

Interviewer: What would you say are the most exciting and most dangerous trends that are currently affecting NGOs in the realm of human rights and strengthening the rule of law, like the NHC?

Tamara Trotman: A dangerous trend that can be seen in several countries is that NGO’s are targeted with absurd allegations of tax fraud, money laundering or financing terrorism. Obviously the aim is to intimidate and silence these organisations that work on human rights and transparency and are critical of the government. What I find exciting is the creative use of social media by NGO’s and citizens; be it in Hong Kong, Minsk, Bangkok or Portland in their struggle for a better and more just society and the ways in which people and movements can learn quickly from and inspire each other in ‘making some noise and getting in good trouble’.

Interviewer: A question to the both of you, what are your hopes for the NHC going forward? If the NHC were to be on the cover of your favorite newspaper or magazine in five years, what would you hope the story be about?

Tamara Trotman: In five years’ time, we will be celebrating the 50th anniversary of the Helsinki Accords. I hope the rise of authoritarianism in the OSCE has then been brought to a halt, that the EU has successfully implemented rule of law conditionality regarding the distribution of EU funds and that the NHC is applauded for its innovative and effective programmes involving citizens and civil society and strengthening them in their pursuit of a more open and just society. 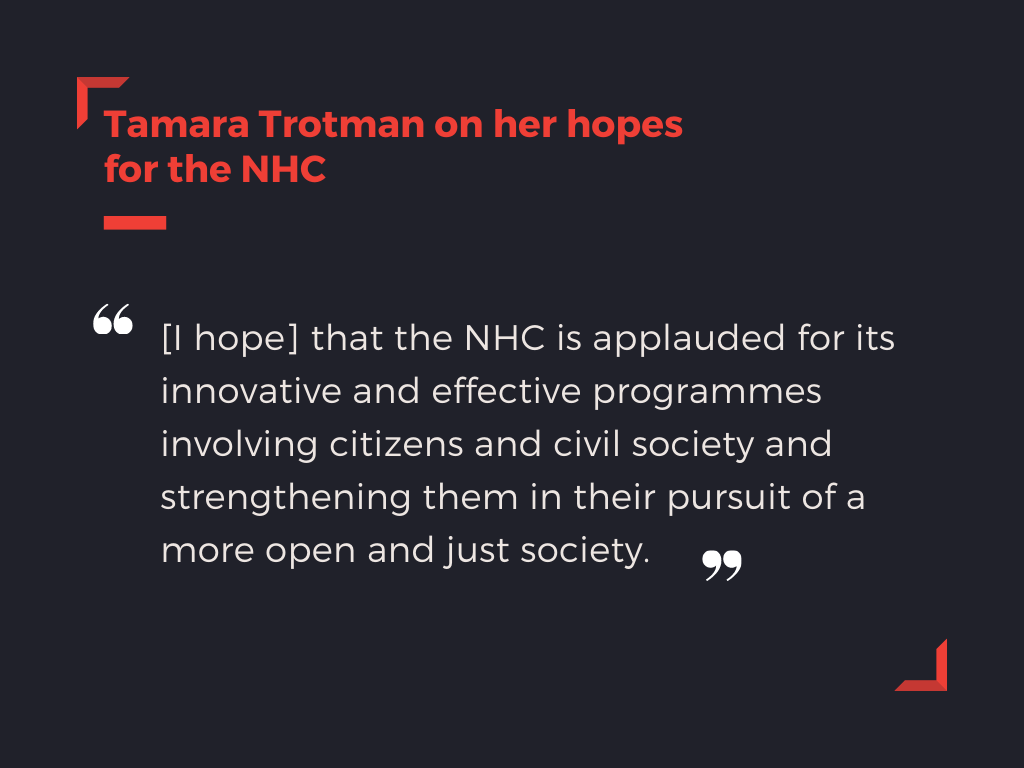 Angela Kaptein: The most important thing is to stay true to your ideals and to keep collaborating and building bridges. It is not about being on a cover of a magazine, nor do I believe that is what the NHC should aspire to in the first place. Although of course to be known is very helpful if not essential. The NHC, in my opinion, should realize authority by focusing on its key objectives. I believe you should be active behind the scenes and work quietly and diplomatically, instead of going for an easy, “headline” solution. The strength of the NHC lies in its focus on a few specific subjects – try to stay true to those. After all, no one can solve every problem.

Interviewer: And finally, Angela, do you have any advice to share with Tamara?

Angela Kaptein: Tamara is an independent thinker with a great network. She driven by the objective of the establishing and maintaining rule of law, and is incredibly well informed. I am certain she will find her way in no time at all. I would advise her to listen well and to get in touch with the NHC staff so that she can tap into what they find important and need. One last tip: make sure to get to know Miranda, the NHC Office Manager. I found her to be unmissable and such a central figure to the organization. Finally, I would hope that she will enjoy collegiality and friendship within the Supervisory Board as much as I did. Best of luck Tamara!