The National Report on Human Trafficking in the Netherlands: NHC’s reflection 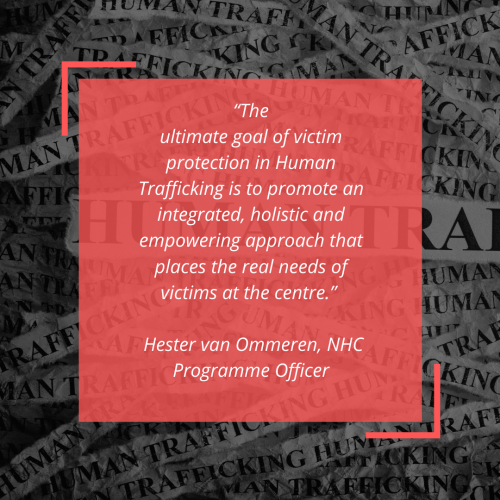 The disjunction between the higher number of victims and lower number of suspects in the Netherlands can perhaps be attributed to the shift in judicial processes regarding Human Trafficking in the Netherlands, specifically a steady decline in the number of prosecutions and increase in case dismissals. In other countries associated with high levels of Human Trafficking in Europe, such as Hungary, the number of judicial punishments is comparatively higher. If judicial punishments are low, there need to be alternative trajectories for Human rights perpetrators to decrease recidivism levels, proposed alternatives shall be outlined later on.

Bolhaar also highlighted a need for a collective local, regional and national level approach to tackling the issue. The report also highlighted that Human Trafficking requires an overarching and coordinated internationalresponse through a diverse range of concerned public and private parties.

These recommendations are also in line with the approach that the NHC and its partners use in tackling Human trafficking. For instance, a collaborative multi-layered approach also stood central in the recommendations in our Balkans Act Now! (BAN) project where we recommended that “CSOs, regional and national protection governmental bodies have to work collaboratively and complimentary, and ensure that quality of services provided is monitored objectively and results analyzed regularly” to achieve human trafficking victim’s protection and sustained recovery.

Prevention and Probation were also touched upon in the National report on Human Trafficking, this is especially interesting to us as they are two areas which the Netherlands Helsinki Committee (NHC) works on extensively.

In NHC’s work regarding Probation Development we highlight the great importance of introducing and enhancing effective practises for the reintegration of ex-offenders back into the community. These practises include following up with offenders to curb the number of re-offenders by organising peer-to-peer training and contacts, capacity enhancement and strategic institutional support, all mechanisms highlighted by the NHC for effective probation development. Increased probation and alternative trajectories for Human Trafficking perpetrators are necessary in tackling recidivism. This is especially important given the extremely young age of human trafficking perpetrators in the Netherlands. As mentioned earlier, Hungary, as well as Bulgaria and Romania, engage in more judicial punishment compared to the Netherlands. Due to the low number of judicial processes, there is a need for more cooperation between chain actors. Indeed, more knowledge sharing and understanding of the sensitivity of Human Trafficking is paramount in order to increase investigation and prosecution of human trafficking cases.

The perpetrators pulled focus in the report. However, it was the high number of victims that was remarkable as Human Trafficking disproportionately affects the victims with regard to coercion, exploitation of the victim’s vulnerability and the threat or use of violence. Therefore, in line with European Union policies, and as highlighted in our BAN projects, victim protection should stand central as:

“the ultimate goal in victim protection in Human Trafficking is to promote an integrated, holistic and empowering approach that places the real needs of victims at the centre.” – Hester van Ommeren, NHC Programme Officer.

NHC’s Access to Justice programme works for a criminal justice process in which the rights of vulnerable groups are protected. It strengthens capacities of actors in the justice chain, as well as of civil society organisations that assist these groups. By focusing on networking and coalition building, the programme brings together actors that normally do not cooperate.