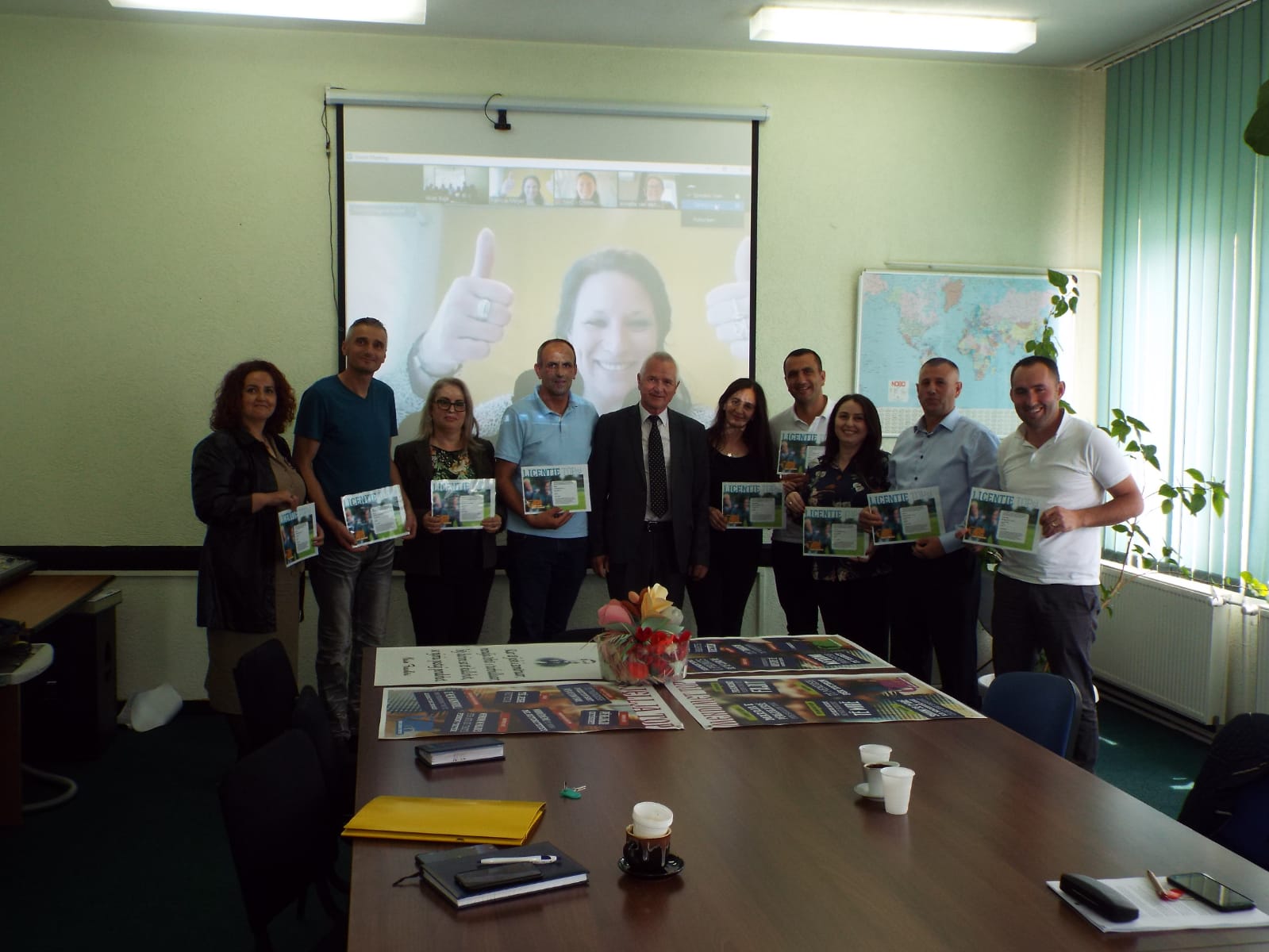 As part of the NHC’s work on securing a safe, stimulating and rehabilitative prison environment for children and juveniles in conflict with the law in Albania, Kosovo and North Macedonia, we are proud to report that staff members of the Lipjan Correctional Center for juveniles completed the basic training to become TOPs! trainers. TOPS! is part of the NHC’s tailored working method aimed at training correctional staff to teach juveniles a sense of responsibility and anger control. See below for a visual outline of the NHC’s methods and goals for securing a safer and more stimulating and rehabilitative juvenile prison environment. 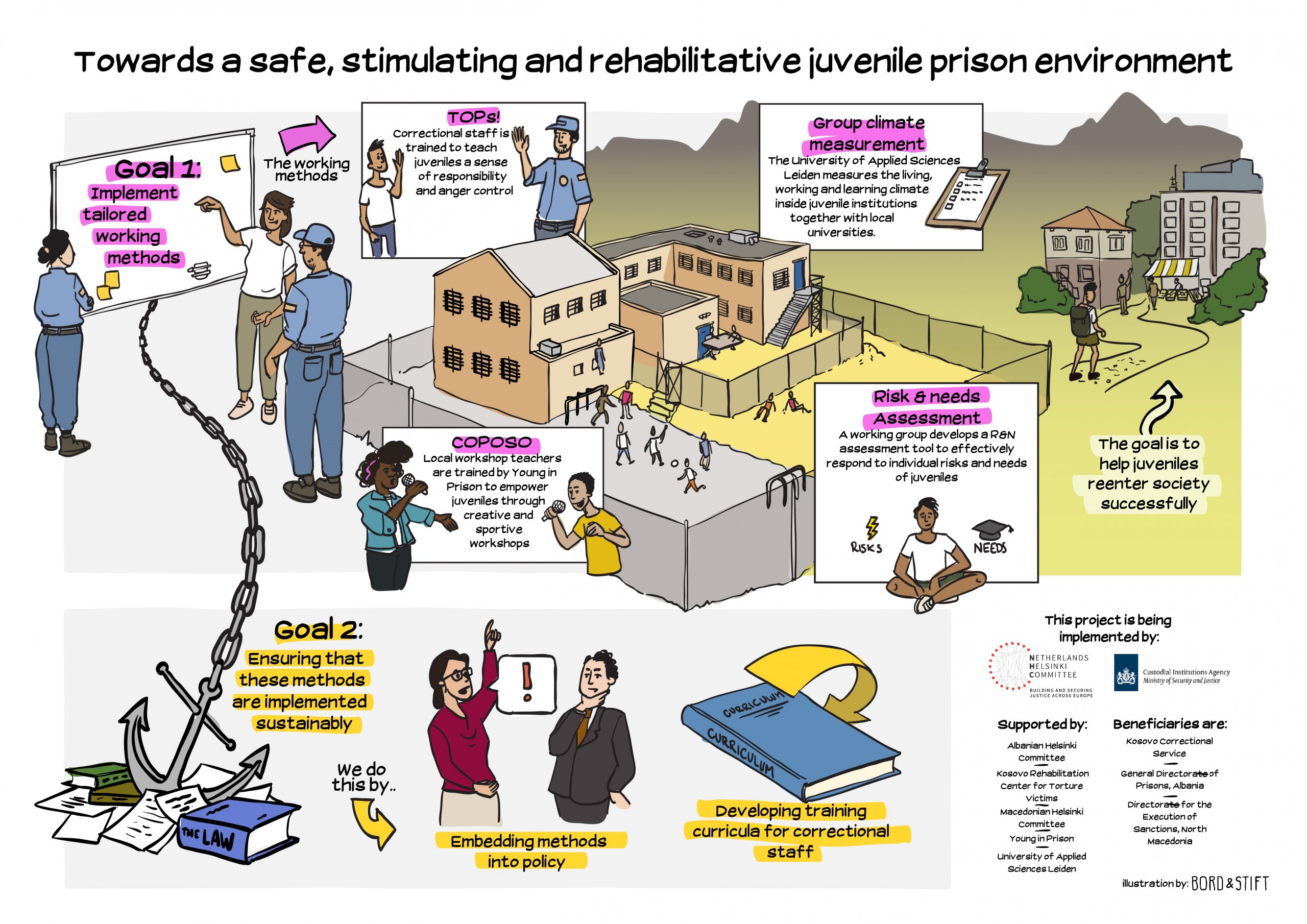 A selection of the participants from the correctional staff will go one to be trained as TOPs! educators, ensuring that they are able to train other staff to become TOPs! trainers.

Kosovo was the first of the three project countries where the training was given, which is why we now have the privilege to hand out certificates in cooperation with Stichting 180, and NHC’s external expert, Patricia Meijer from Teylingereind. Correctional centres for juveniles in the two other project countries – Albania and North Macedonia – are now in the process of rounding up the basic TOPs! training, or have just done so.

The staff members of the juvenile institution in Lipjan had been following the basic TOPs! training from the end of January 2021, through to the start of February 2021. After completing the TOPs! basic training, staff members continued to organise TOPs! meetings with the juveniles in the institutions. All under the careful guidance of NHC’s external expert Meijer, through a few online ‘after care’ meetings, where the staff reflected on these meetings with the juveniles and the implementation of the programme.

At the closing of the training, one of the activities is a moral reasoning training. Dilemmas are posed to the youths participating in the training by the trainers. For instance, a scenario is sketched after which questions are asked, such as: ‘Your brother sells drugs, would you share this information with others or not?’ The trainer can choose from 12 dilemmas in total, picking the most relevant for the situation. Learn more about the operationalisation of the TOPs! training here.

Why TOPs! is important

TOPs! is a group training for youths displaying antisocial and delinquent behavioural tendencies, providing them with the necessary skills to reflect upon and change their behaviour and outlook, ultimately contributing to a lower recidivism rate. At the NHC, we believe a criminal justice system focused on rehabilitation rather than punishment is better at contributing to safer societies, and thus a training such as TOPs! is vital to the overall success of not only this project, but our goals for criminal justice reform.

About the Criminal Justice Reform Programme

We believe a criminal justice system focused on rehabilitation rather than punishment is better at contributing to safer societies. The Criminal Justice Programme promotes and supports criminal justice reform that works to ensure offenders are able to successfully re-enter society and do not re-offend. By providing tools and trainings to prison staff or probation officers, we help improve the implementation of justice. By bringing together high-level officials, policy experts, and seasoned practitioners from different countries, we contribute to the development of the most effective policies and practices. We also promote collaboration between different actors in the justice system, such as judges, prosecutors, probation, prison, and civil society organisations to ensure reforms pursued are effectively implemented throughout the entire system.