45 years since the Helsinki Accords

Today marks the 45th anniversary of the signing of the Helsinki Final Act, commonly referred to as the Helsinki Accords. It is the precursor to the establishment of the Organization for Security and Co-operation in Europe (OSCE). The Helsinki Accords enabled civil society organizations to hold governments accountable for their performance in implementing its definition of comprehensive security. This included respect for human rights, fundamental freedoms, and democracy. The comprehensive definition of security created an environment where, for the first time, human rights violations happening inside a country could be held accountable at an international level.

The Helsinki Accords not only gave rise to the NHC, and other Helsinki Committees around Europe, they were an unprecedented milestone when it came to upholding human rights and the rule of law, and being able to hold governments accountable for human rights violations at an international level. As much as has changed in the last 45 years, the NHC still proudly stands in the tradition of the Helsinki Accords and looks to a future where we continue to uphold the values with which the Final Act was designed. 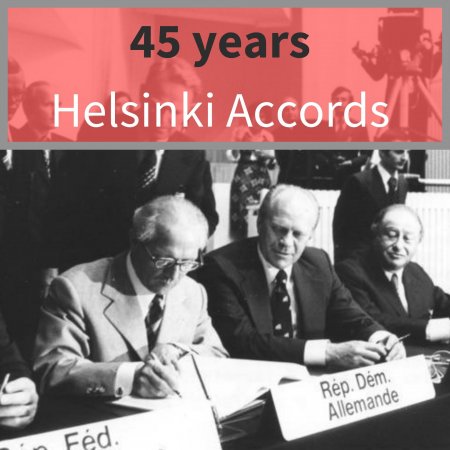 Exclusively for the NHC, Piet de Klerk, Chairman of the Supervisory Board of the NHC, Harry Hummel, Senior Policy Advisor at the NHC, and Robert van Voren, Professor of Soviet and Post-Soviet Studies and Vytautas Magnus University in Kaunas (Lithuania), reflect on the challenges and opportunities facing the Helsinki Accords today, and the organizations working under their umbrella.