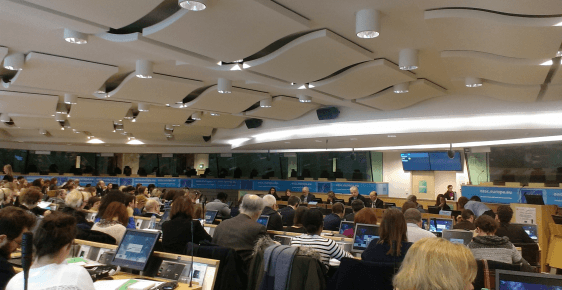 The Netherlands Helsinki Committee participated on February 15th in the European Conference on Human Rights of Children Deprived of Liberty. The conference, organized by the non-governmental organization Defence for Children-Belgium, aims to improve monitoring mechanisms across Europe. The NHC participation is twofold as the topic is at the core of the organization’s mandate, but also the conference was a positive chance for the organization to meet with its partners from Albania, Kosovo and Macedonia that attended the conference in Brussels.

The partners, which include the offices of the Ombudsman in Albania and Kosovo, the Kosovo Rehabilitation Centre for Torture Victims and the Macedonian and Albanian Helsinki Committees participate in the NHC project “Improvement of Prison Conditions for Reintegration of Juvenile Detainees in Albania, Macedonia and Kosovo”.

The conference was organized around the launch of the “practical guide on monitoring places where children are deprived of liberty” The guide is a very practical tool which aims to assist professionals and representatives of institutions such as members of national Preventive Mechanisms (NPMs), Juvinile Judges and Civil Society monitors.

In his opening remarks Mr. Gnatovskyy, the President of the European Commission for the Prevention of Torture, underlined the importance of the guide as it is the first practical tool with child sensitive and preventive perspective, based on a child-oriented approach. However, he also stated that professionals and representatives should, despite the guide, take care ‘not to go for standard solutions, but carefully assess the local circumstances and aim for tailored solutions’. Mrs. Katarzyna Wisniewska, of the NHCs Polish counterpart the Helsinki Foundation for Human Rights, underlined the need of Civil Society Organisations to play its part in national monitoring mechanisms, a figure that is not applied by all European countries.

Mrs. Margaret Tuite, the European Commission Coordinator for Rights of the Child, underlined the necessity of such an instrument as also within the European Union practices linked with locking up young children without taking their rights into account continue. As an example she cited a recent publication by the Global Detention Project on detention of migrants on locking-up migrants children amongst others in The Netherlands.

From his point of view Dr. Philip Jaffe (University of Geneva) reminded the audience that ‘each child that is deprived from its freedom and becomes part of the Justice system, is potentially damaged by its stay in the system. Those who go from the street to prison do not develop psychologically as normal children do. As they are usually already traumatized and they are not treated during their stay in prison, they tend to come out more damaged from detention and hence form a greater risk for society’. He also underlined that people that have experienced trauma in their early youth are far more vulnerable for risk-taking or breaking rules. Therefor there is a great need to apply a comprehensive and holistic training method that takes into account case-specific solutions focused on children exclusively. According to Dr. Jaffe the guide is critical for that and helps monitoring bodies to do their work properly.

In his address the UN Special Rapporteur, Mr. Juan Mendez, underlined the need to not only implement international law on child rights but to also have a special focus on the mental health of children in detention. He particularly urged medical doctors to keep an eye on the health situation of children in prison. He also called upon states not to treat migrant children as detainees.

The conference also shed light on the abundance of international, regional and national judicial frameworks and monitoring structures. Pierre-Yves Rosset, DCI’s Children’s Rights Officer claimed that at this point there is no need for additional mechanisms or treaties. However, there is a need for more effective implementation of the treaties and mechanisms by institutions and monitoring by others actors. This should be the focus of both national, regional and international institution for the coming years. The 2nd Vice President of the European Convention on Prevention of Torture (CPT), Mr. Anton van Kalmthout, also a member of NHC’s Advisory Committee, closed a very successful seminar underlining the need for full success to files of the European CPT to have full access to files, including medical files, in order to effectively support countries to improve the situation of children that are detained.

The Netherlands Helsinki Committee will be happy to include the practical guide and the capacity building efforts that grow from it into its programmes in the OSCE region as well as into its national advocacy activities.