Berrin Sönmez has been fighting for women’s rights in Turkey for most of her life. Despite media suppression and shrinking space in publications for dissenting voices, she is an influential and critical voice in public debate. Sustained attention and a proactive strategy by the EU, its Member States, and the international community as a whole is needed to defend the space in which Berrin Sönmez and other human rights defenders and journalists work without risk of reprisals and unfounded litigation for their work.

The portrayal of Sönmez’s experiences is a continuation of the series “Defending Human Rights in Turkey: Stories that Need to Be Heard,” told by Tan Tunali, with illustrations by Marco Lambooij. 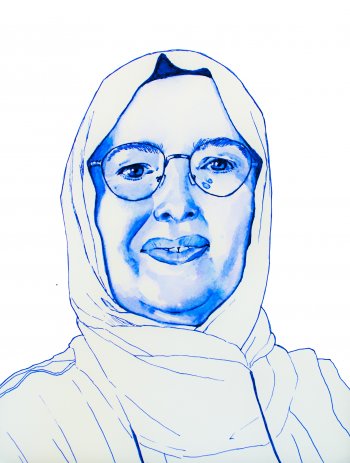 A water-colour depiction of Berrin Sönmez

Similar to many human rights defenders, from early in age, Berrin Sönmez had a strong sense of justice. As a young girl, she observed that women around her were not treated the same way as men. “I saw how women were worn down in all parts of society,” said Sönmez. Growing up in a religious family, she discovered feminism as a way to challenge these injustices. With the support of her family, she blended her Islamic and feminist identity. She now proudly identifies as an Islamic feminist.

Sönmez pursued a career in academia, after completing her studies at Ankara University’s faculty of Linguistics, History and Geography. She worked as a researcher and later as a teaching assistant in the small western city of Afyon on behalf of the Ministry of Education. Throughout her career, she dealt with the discriminatory practices of the Turkish state. Because of the government’s interpretation and implementation of secularism at the time, she was not allowed to wear her headscarf in public institutions. For a period, Sönmez stopped wearing her headscarf, but later in life started again. She seldom discusses the decision regarding her headscarf in public, “After all, it is a very personal matter,” Sönmez said.

Growing up in a religious family, she discovered feminism as a way to challenge these injustices. With the support of her family, she blended her Islamic and feminist identity. She now proudly identifies as an Islamic feminist.”

In 1997, the so-called ‘post-modern’ coup took place in Turkey, during which a clampdown on religious freedom took place. Based on vaguely defined competencies in the Constitution, the Turkish military traditionally perceives itself the guardian of secularism in the country. Partially based on this, on February 28, 1997, the military forced certain members of government to resign, causing the coalition to fall apart, and the Islamic-oriented Prime Minister Necmettin Erbakan to step down. At the time, Sönmez was working as a teacher in cultural history in Afyon. In the wake of the military intervention, state institutions restricted religious freedom, claiming it to be a threat to secularism. Religious schools were shut down and the (already limited) number of women with headscarves at universities were barred from entering campuses. Religious teachers, portrayed as ‘anti-secularist,’ were fired from their positions, including many of Sönmez’s colleagues and friends. Eventually, in 2001 Sönmez was forced to retire herself.

Today, just two decades later, the state’s relationship with religion is drastically different. This began in 2002 when, for the first time in the Republic’s history, a religiously oriented political party won enough votes to form a single-party government. This party, Justice and Development Party (AKP), has been in power ever since. Turkey’s current president, Recep Tayyip Erdoğan, was (and still is) the AKP leader. In 2002 when his Party came to power, Erdoğan was serving a prison sentence for reciting a religious poem, charged with inciting violence, and religious or racial hatred—ironically a similar charge commonly lodged against rights defenders nowadays who have criticised his government. After Erdoğan’s release and since coming to power, he has gradually consolidated power and tightened his grip on the Party and the country.

Nowadays, they [the AKP] don’t allow any critique anymore. From a party that challenged the status-quo, it gradually became the status-quo itself” – Berrin Sönmez

Sönmez’s forced retirement coincided with the rise of the Party that has shaped Turkey for nearly two decades. Like many people, she initially supported the AKP’s efforts to democratise and further integrate Turkey with the European Union. The headscarf ban in public offices, in place for decades, was gradually dismantled under President Erdoğan. Over time, however, Sönmez began to grow weary of the Party’s motives. “When an internet law was discussed in 2007-2008 of which I was critical, I realised they didn’t allow any criticism. That’s when I stopped supporting them,” she recalled. In the years since, the AKP has lost the support of many democratic groups in the country as it strengthened its grip on power and the authoritarian tendencies surfaced. “Nowadays, they don’t allow any critique anymore. From a party that challenged the status quo, it gradually became the status-quo itself,” Sönmez said.

Women’s rights have also been under tremendous pressure. Sönmez argued that the dominance of men in representative bodies in Turkey’s current government illustrates this well. The current cabinet only sports two female ministers. “That’s actually good. It’s double the number compared to the previous cabinet,” Sönmez joked. For her, it shows how patriarchal structures inform government ideology. As a result of these hardening structures, the opportunity to lobby for new legislation and effectively implement existing laws strengthening women’s rights have become more difficult over the past years, Sönmez said.

Despite Turkey’s ratification of the Council of Europe’s 2011 Istanbul Convention, which aims to prevent and combat violence against women, the Turkish government has failed to implement the necessary measures to give the Convention real effect. Consequently, violence against women is still a very serious problem in Turkey today. According to the We Will Stop Femicides Platform (Kadın Cinayetlerini Durduracağız Platformu) 440 women were killed in 2018 alone, and in many cases perpetrators are not brought to justice.

We should not forget the women’s movement is a beacon of hope and still very strong.” – Berrin Sönmez

Her forced retirement in 2001 allowed Sönmez to dedicate more time for the feminist activism she has always pursued. Sönmez joined the Capital City Women’s Platform (Başkent Kadın Platformu Derneği), where she served as the president between 2011 and 2013. The Association works to increase women’s public participation through education, employment and political activism—exactly the goals Sönmez set out to achieve as a young girl when first introduced to feminism.

Nowadays Sönmez is an influential and critical voice in public debate, despite media suppression and shrinking space in media and publications for dissenting voices in Turkey. She writes columns for the critical news website Gazete Duvar and discusses women’s matters in the weekly talk show The Feminist Perspective (Feminist Bakış) on the media platform Medyascope.

The women’s movement is a crucial arena for the dialogue about topics that are otherwise hardly spoken about in public. In a country where criticism of the government is decreasingly tolerated, these discussions are made ever-more important. While democratic forces in Turkey, including women’s rights movements, are facing an uphill battle; for Sönmez, the women’s movement remains an inspiration for continued activism. When asked about the status of the movement Sönmez said, “We should not forget the women’s movement is a beacon of hope and still very strong.”