Bülent Şık is a food engineer and public health researcher, convicted for his whistle-blowing activities. Despite being barred from his research and academia in Turkey, Şık has remained steadfast in his work to spread information relating to public health which he believes the public has a right to know. Sustained attention and a proactive strategy by the EU and its Member States is needed to ensure Bülent Şık and other human rights defenders in Turkey can continue their work.

The portrayal of Şık’s situation is a continuation of the series, “Defending Human Rights in Turkey: Stories that Need to Be Heard,” told by Tan Tunali, with illustrations by Marco Lambooij. 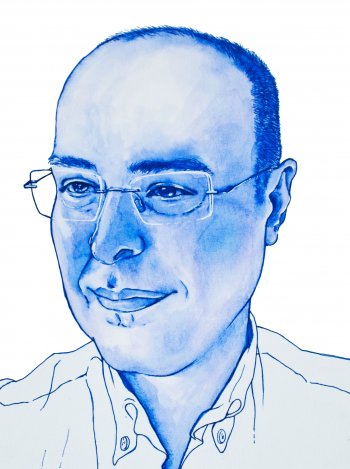 A water-colour depiction of Bülent Şık

As a child, Bülent Şık wanted to become a lawyer. His interest in law was fuelled by his uncle Ahmet Albay—an attorney and local politician of the secular Republican’s People’s party (CHP) in the southern town of Adana. “He was my idol,” Şık said. “My uncle’s law office was close to our school, and I went there all the time, reading and working as a kind of assistant,” he added. In 1980, these inspiring visits were brutally halted when Albay was murdered because of his work providing legal defence for the victims of the 1978 Maraş Massacre—a pogrom during which a right-wing mob stormed a majority Alevi neighbourhood, killing over 100 people. Two other lawyers in the case, Ceyhun Can and Halil Sıtkı Güllüoğlu, were killed as well.

Shortly after the murder of his uncle, the violent military coup of 12 September 1980 took another heavy toll on Şık’s family—and society at large. More than half a million people, most of them leftists, were taken into custody in Turkey. Many were tortured in prison, 50 people were executed. Others were blacklisted, thousands lost their citizenship. The Şık family was forced to leave Adana, their hometown; they moved to the southern seaside town of Antalya. There, his high school chemistry teacher Ruhi Mülayim convinced him to study food engineering in Izmir, where Şık specialised in environmentally friendly food analysis techniques. After graduating, Şık started working in the laboratories of the Ministry of Food, Agriculture and Livestock, where he undertook research on topics related to public health and food safety.

As Deputy Director, Şık contributed to research…The water in several residential areas was found to be unsafe to drink due to lead, chrome, aluminium and arsenic pollution.”

Şık started to work at Akdeniz University as a faculty member. Between 2010 and 2016, Şık was deputy director of the newly founded Food Safety and Agricultural Research Centre. As Deputy Director, Şık contributed to research—commissioned by the Ministry of Health—on possible links between the rising number of cancer cases in several industrial provinces in western Turkey, and the soil, air, food and water pollution in these areas. The results were shocking. Pollution levels found in food and water were at toxic levels. Pesticides, heavy metals and polycyclic aromatic hydrocarbon were found in food samples. The water in several residential areas was found to be unsafe to drink due to lead, chrome, aluminium and arsenic pollution.

In December 2015, after five years of research and analysis on thousands of samples, sixteen separate working groups presented their findings during a four-day conference in Antalya to an audience of academics, health professionals and representatives from the Ministry. Shocked by what they had discovered, Şık remembers asking a high-ranking official at the conference what the Ministry would do with the results. “He told me that they would take all the preventive measures necessary,” Şık recounted.

…in the beginning of 2016, Şık signed the peace petition…Bülent Şık started receiving threatening phone calls, social media messages, and his office door and those of eight of his colleagues, academics and researchers who had also signed the petition were marked.”

In the meantime, at the beginning of 2016, Şık signed the peace petition “We will not be a party to this crime!” (Bu Suça Ortak Olmayacağız!) in which 1,128 academics called for the end to state violence in the predominantly Kurdish southeast of the country (similar to other Academics for Peace, such as Füsun Üstel and Cavidan Soykan). In January 2016—a few weeks after the conference in Antalya—the petition was made public. This immediately drew the ire of the Justice and Development Party (AKP) government and their supporters. President Recep Tayyip Erdoğan accused the academics of “treason.” Bülent Şık started receiving threatening phone calls, social media messages, and his office door and those of eight of his colleagues, academics and researchers who had also signed the petition were marked. Şık could not go to work for ten days. Three weeks after the petition had come out, Şık was fired. He lost his job at the research centre and was immediately bared from the research projects that had just been concluded. Şık only went back to his office once to collect some of his personal belongings. “Luckily I made a copy of all the analysis reports of research from my computer, just to have as a backup,” said Şık.

[After the petition,] we were stigmatized, and we knew that our time would come. The coup attempt only sped things up,”

But he did not expect the Ministry to deliberately hide the results of the research from the public. “Call me naïve, but there were at least 20 academics and so many Health Ministry bureaucrats involved [in the research], and the results were of enormous importance to the public. We had taken biochemical samples from people, so we also had a responsibility towards them,” Şık explained. Out of a job, Şık was still curious about the fate of the project. Over a year later, he found out that all the work he and his colleagues had done had been in vain. The reports that documented the serious health impact of various toxins in the air, food and water supplies of millions of people ended up untouched in some drawer of the Health Ministry.

Following the 2016 coup attempt, Şık also lost his job at Akdeniz University via emergency decree. It came as no surprise to him, “[After the petition,] we were stigmatised, and we knew that our time would come. The coup attempt only sped things up,” he said. In the repressive environment that followed the coup attempt, over 6,000 academics lost their jobs in a similar way. One month after he had been fired, Şık’s younger brother, investigative journalist Ahmet Şık, was taken into custody, along with 17 colleagues and executives of the newspaper Cumhuriyet. He would be held in pre-trial detention for over a year.

From Ministry-employed researcher, Şık went on to become a whistle-blower.”

After Bülent Şık understood that the results of the research were not going to be shared with the public, he started to analyse the material he had hastily downloaded from his office computer. “In one way or the other, these results had to be shared with the public,” he explained. But deciphering the research results was not an easy task, as he only had the raw material of the two out of the sixteen projects he had participated in himself.

From Ministry-employed researcher, Şık went on to become a whistle-blower. After one year, Şık shared the research results in a series of articles on the daily newspaper Cumhuriyet and on Bianet (co-founded by Nadire Mater, previously featured in this series)—an online media platform with a focus on human rights. Following the articles, the Ministry of Health launched an investigation into Şık, accusing him of various crimes. In September 2019, Şık was convicted of “Disclosure of Confidential Information in Respect of a Duty” and sentenced to 1 year and 3 months imprisonment—a decision currently undergoing appeal.

The Ministry never challenged the facts of the research it had itself commissioned. Şık would not find support from his former project colleagues. Instead, after the publication of the first article, a former colleague called Şık, discouraging him to publish anything else, and warning him that there would be a “price to pay.” In response, Şık argued that people have the right to know what is happening to them. Further to his point, in court, Şık also said, “A scientist is primarily responsible to society, not to companies and institutions. Because the health and the future of the societies are more important than the short term interests of the companies and the institutions.”

It was not all bad, Şık emphasised. After all, more people heard of the case than they otherwise would have. Also, the widespread solidarity he received both internationally and from within Turkey was important and heart-warming. Besides his own and his brother’s case, Şık himself also followed cases of fellow Academics for Peace. “It must have been at least 20 times that I was in the courthouse around this time” he recalled. After the Constitutional Court ruled in July 2019 that the freedom of expression of the academics was violated, Şık’s case for signing the petition was dropped.

… even though it might not be in an academic research or publication, whatever the circumstances are, I will continue to produce and share knowledge,”

The tumultuous times, his job loss, his legal persecution, and that of his colleagues and his brother significantly impacted Şık’s life. Being an academic who had been dismissed by decree for signing the peace petition made it impossible to find another job. Besides a ten-month stint as a rapporteur for the Chamber of Food Engineers, he has started working on making the knowledge in his field available to the wider public—a topic to which he had always given great importance. He has been writing a regular column, “The Chemist in the Kitch” (Mutfaktaki Kimyacı), on food safety and related topics for Bianet. “It feels good to realise that I can still do that,” he said. With the hard impact of the coronavirus on Turkey, Şık has now also been writing about the global pandemic. He stresses the systemic problem of the destruction of nature as a cause of the spread of the virus and warning for other possible outbreaks that might aggravate the impact of the coronavirus. “The government may push you out of the system and hold your work in disregard, but I said: even though it might not be in an academic research or publication, whatever the circumstances are, I will continue to produce and share knowledge,” Şık concluded.