On 29 June 2022, the NHC facilitated a round table discussion between Vice Minister of Justice of Ukraine, Olena Vysotska, and a number of Dutch and international donors and members of civil society. The discussion centered on the current situation in Ukraine, the immediate needs, challenges of the Ministry of Justice in criminal justice sanctions execution, and the sudden opportunities that occur for facilitating meaningful change in Ukraine’s criminal justice system during a time of unprecedented turmoil, but also unity in the country.

There isn’t often momentum in any country from all branches of government to act as one. At the moment, there is unparalleled unity and unprecedented political will in Ukraine to not only keep fighting, but to transform the country […] If we have a moment when it is too hard then we stop for a night and continue the next day. – Olena Vysotska, Vice Minister of Justice of Ukraine 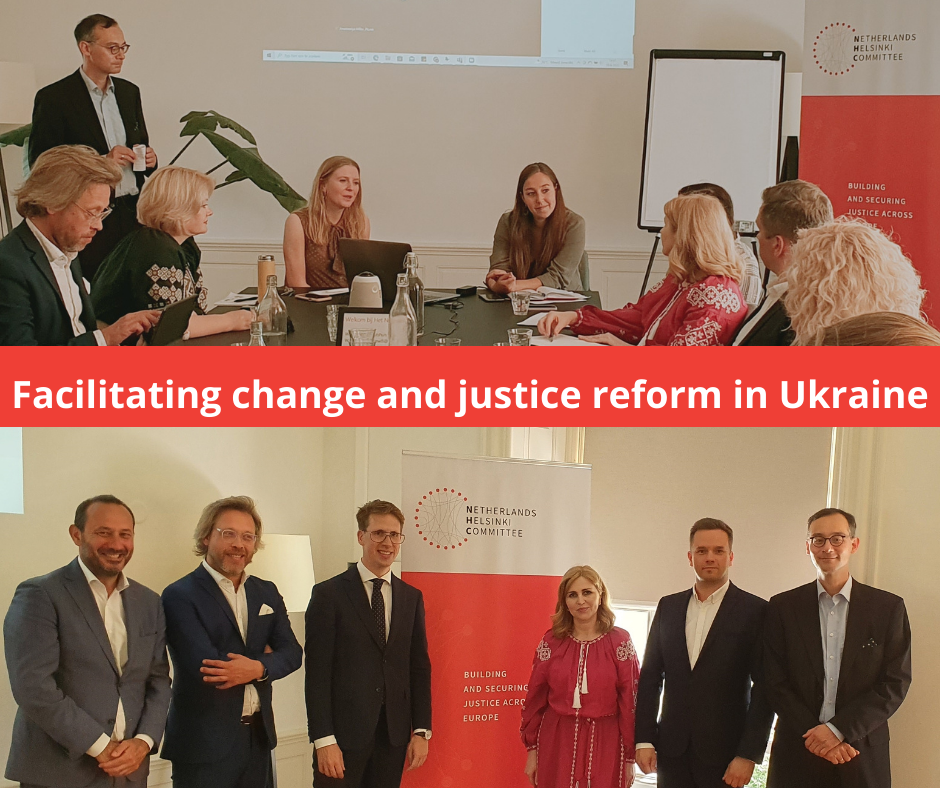 Ms Olena Vysotska, Vice Minister of Justice of Ukraine, together with representatives of CILC, Reclassering Nederland and the Netherlands Helsinki Committee

Main conclusions and needs summed up

Read on for a full summary of this discussion. If you like to know more about what international donors and organisations can do to support criminal justice reform in Ukraine in times of war, or would like to continue the conversation, please feel free to reach out to us by sending an email to achaghouani@nhc.nl. 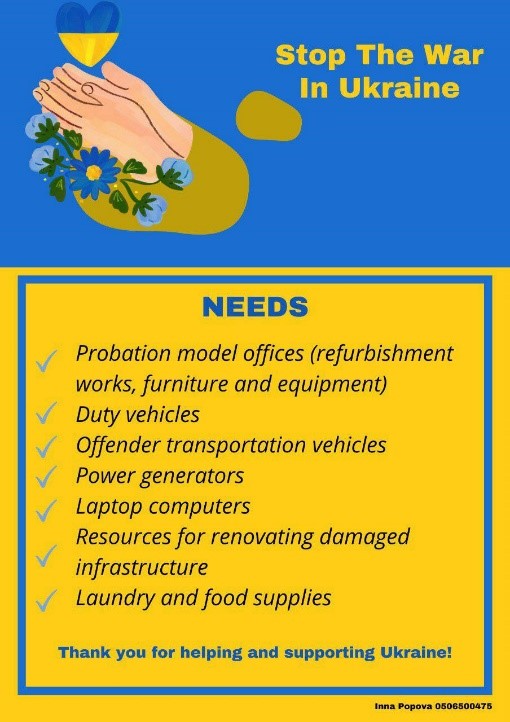 The NHC and (criminal justice) reform in Ukraine

The NHC has been working on protecting and promoting democracy, human rights and the rule of law across Europe since 1987. Coming from the Helsinki movement, the NHC has since its beginning been very engaged in supporting justice reform and strengthening democratic institutions in Eastern Partnership countries after the collapse of the Soviet Union, though our four programmes: Access to Justice, Criminal Justice Reform, Integrity and Accountability, and Human Rights Defense. Within the Criminal Justice Reform programme, the NHC strives to support countries in building criminal justice systems focused on rehabilitation, rather than punishment. We have been implementing a project together with the Centre for International and Legal Cooperation on promoting alternative sanctions in Ukraine, and working closely together with the Ministry of Justice in Ukraine in order to do so. This project is funded by the Dutch Ministry of Foreign Affairs, in which experts from the probation services from the Netherlands have played an important role in sharing experiences and expertise to help the Ministry of Justice in Ukraine set up an effective probation service. This is one of the few projects focusing on institutional reform that has not been put on hold since the start of the war, and in which we are now exploring together with the Ministry how we can continue certain activities and respond to the new need that arise from this situation. The NHC has been able to resume two online trainings in Ukraine in this respect since the start of the war, actively facilitating the transfer of knowledge on probation.

In supporting the reconstruction of Ukraine, we talk of rebuilding homes, roads, schools, etc. Obviously this is the urgent needed right now, but next to repairing the so called hardware, there should also be a focus on software; supporting a healing process in society. An independent, transparent and effective justice system is essential in this process. We should not wait for the war to end before again engaging in this transformation. – Aïcha Chaghouani, Advocacy Officer NHC

In light of this, the NHC was honoured to host the Vice Minister of Justice of Ukraine, Mrs Olena Vysotska, during her visit to the Netherlands at the end of June 2022, to discuss the future of justice reform in Ukraine.

Ms Vysotska took the opportunity to reflect on the current situation in Ukraine, focusing on both the challenges and opportunities at this time.

Ukraine is now going through the most challenging times in its history, fighting for what we believe in: our shared European values. And despite everything, it is important to see some opportunities. We are very happy to be here and share how governmental institutions are able to be operational and continue to focus on reform in our approach – continuing on the path of transformation towards Europe which we started in 2014.

Ms Vysotksa noted that despite the war, almost all public institutions are currently operational in Ukraine, and that efforts in certain areas, such as protection of human rights and rule of law, have been reinforced.

As Vice Minister of Justice, Ms Vysotska has been especially involved with the planned reform to the criminal justice system, and in particular the introduction of a viable probation system in Ukraine. She noted that currently there are 79 prisons, 33 pretrial detention facilities, 500 probation units, 30000 prisoners, 20000 detainees in pretrial facilities, 60000 probation clients and 27000 staff working on reforming the system of alternative sanctions in Ukraine. The focus of the reform has been a shift from punishment to a more humane approach, while widening the scope for alternative sanctions. Ms Vysotska and colleagues from the Ukrainian Ministry of Justice, together with the NHC and CILC, have been closely involved with building capacity for probation since 2017, focusing on decreasing the number of inmates, widening the scope, and promoting the benefits of alternative sanctions, also in the judiciary, and concentrating on digitization.

Interested to know more about the benefits of probation? Click here for our short video “Get smart on crime”.

When reflecting on the effect of the Russian invasion, not only on the country, but also on their work specifically, Ms Vysotska noted:

Even though the invasion was supposed to paralyze the work of our systems, our team was able to mobilize. We are ready not only to restore but also to continue on a path of transforming the country.

Development of probation remains seen as important, with a focus on developing respected institutions in criminal sanctions execution, with trust from judges, prosecutors and civil society, while continuing to see communication with society as key to any future success of a viable system of alternative sanctions (see also here for launch of nationwide PR strategy for probation roll out in Ukraine, which Mrs. Vysotska aims to review on a very sort term to adapt it in the light of the most recent developments).

“Wartime means there is need for short and long term perspectives,” Ms Vysotska noted. “In the short term, the focus is on preparatory work to later on develop the project, while at the same time continuing with pilots in the safe territory in (western) Ukraine.”

“We have a black belt in working with limited resources,” Ms Vysotska reflected, when asked how small funds and organisations can best provide assistance at this time. The Ministry of Justice of Ukraine plans to continue conducting pilot projects in the west of the country/safe territories, focusing on changing the legal framework, on communication, on showing the parliament the importance of legislative change, as well as selecting and training the right staff and learning about the best practice in community service. When it comes to the development of probation, these “small interventions can spark meaningful change, ultimately having a snowball effect,” as was also noted by Jochum Wildeman of Reclassering Nederland.

Prisoners of war: Ministry of Justice takes on new role

During her speech to the participants of the roundtable, Ms Vysotska reflected on the new functions now being carried out by the Ministry of Justice of Ukraine, such as the coordination of war prisoners. She noted the Ministry of Justice was honoured to take over this new, challenging and sensitive role from the Ministry of Defense, highlighting the ambition is to ensure humane treatment of prisoners in line with the Geneva Convention, while also “winning the legal battle with Russia”:

It is symbolic to be talking to you here, in this city where the ICC is headquartered. I believe in the role and support of the ICC to help us bring to justice the high commanders of the Russian army and government officials responsible for this war.

Ms Vysotska noted these are unique, new challenges and tasks for her department, as the regime for the detention of prisoners of war is completely different from the regime as described under the Penal Code. All support in this new challenge is very much appreciated. More specifically, she noted help was needed with supplying equipment, such as body cameras, which are seen as instrumental in proving humane treatment of prisoners of war, and ultimately winning the propaganda battle with Russia.

Ms Vysotska also noted Ukraine very much welcomes and invites foreign observers to monitor the treatment of prisoners of war, with the ultimate hope to get the message across to Russian soldiers: that they will indeed be treated humanely if captured, and that this is a better alternative than continuing to fight a senseless war:

We want the world to see that we are different from Russia, that we do respect and protect human rights, and in order to do so, it is important to be open and transparent. We invite the international community to prevent and combat the spread of Russian propaganda. Also to hopefully show Russian soldiers they will be treated humanely in Ukraine, surrender is better than to keep fighting for a cause they might not believe in.

Moreover, Ms Vysotska noted that despite new challenges, the people, government and civil society in Ukraine are more united than ever to continue with not only the restoration, but transformation of the country. It was mentioned by both speaker and participants that the justice sector will play an important role in this recovery; moving away from a system inherited from Soviet times – seen as important in light not only of the EU ambition of the country, but also when it comes to the protection of human rights.

While many international bodies and embassies are yet to (fully) return to Kiev, this is not necessarily a major obstacle to continuing reform and providing assistance.

“A blessing in disguise is how we learned to work in this pandemic, which helped us to keep in touch when the war broke out. It is also possible to organize study visits such as this one for people from Ukraine.”

Despite everything, “this is the right time for largest most transformational reforms,” Ms Vysotska noted.

One of the main aims of our efforts to transform Ukraine is to bring the refugees back home. We are relying on strong family connection of those who have left; they continue to be in touch and connected to our fight. We want the reforms we are making to also make the news so that not only the war is highlighted, but also the country we want to have when this war is over.