On Friday 20 November 2020, Sviatlana Tsikhanouskaya, leader of the Belarusian democratic movement, met with representatives of Dutch civil society organisations, parliamentarians, Labour Unions and sports organisations at the premises of the NHC in the Nutshuis. During the meeting, Ms Tsikhanouskaya discussed ways in which we can combine solidarity, support and political action from the Netherlands and the EU to the citizens of Belarus.

On this year’s Human Rights Day, the NHC asks for sustained attention from the international community for the situation in Belarus and calls for unwavering support for a peaceful and democratic transition in the country. 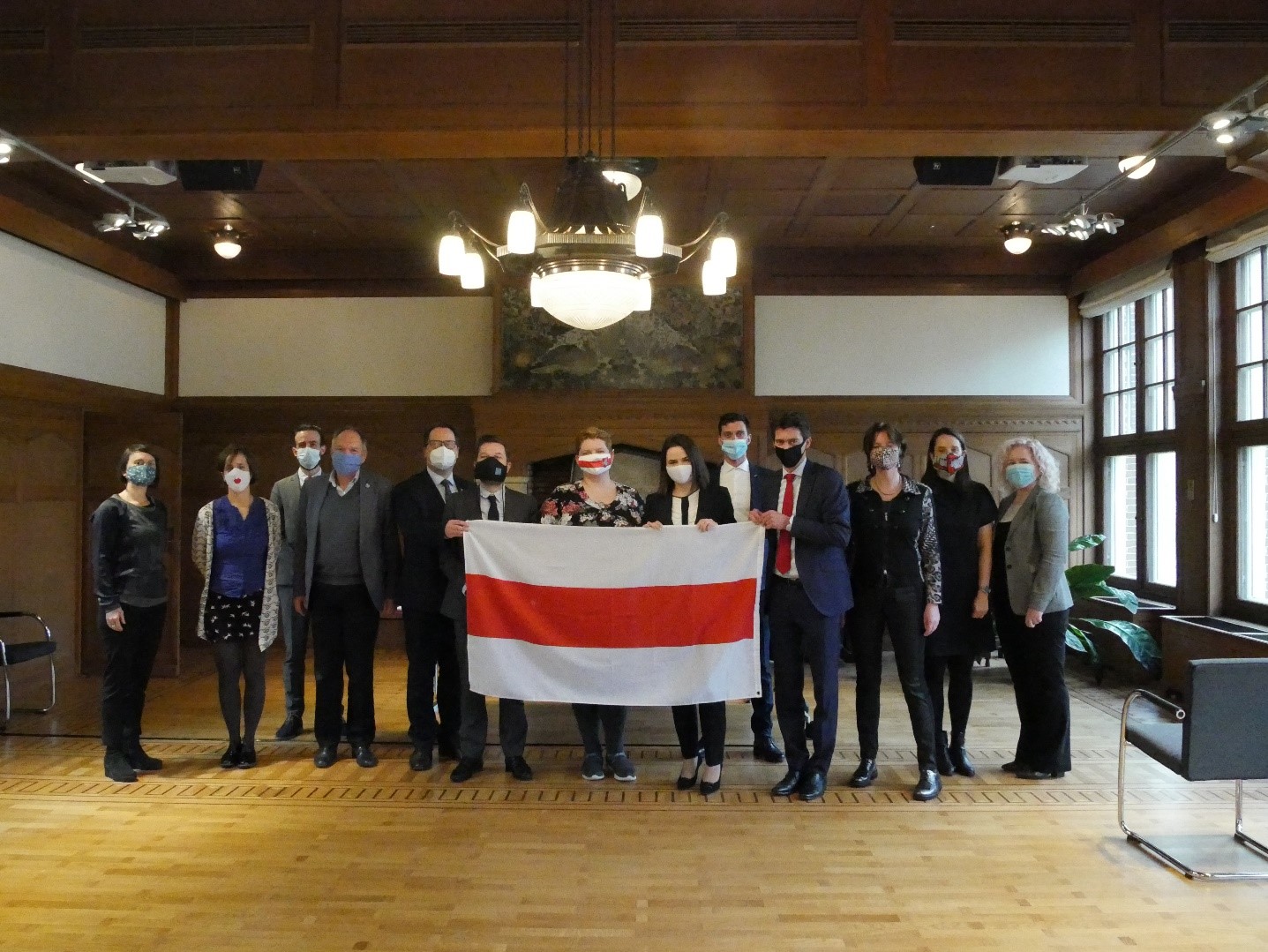 “There is a humanitarian crisis in Belarus. Political prisoners suffer in jail. The regime does not want to give the people the right to choose. The protest is ongoing for 100 days already and Belarusians are becoming desperate. The regime is violent. We have to invent ways to keep contradicting this regime without using violence. We don’t have the same power as the dictator has, but we have the view that changes need to happen. Please be vocal about Belarus. Imagine people who are being tortured in jails, dying because of this violence and it will give the courage to have a strong position on Belarus. With the help of European countries, we will manage to get rid of this dictatorship. I ask you to help our people as much as you can.” – Sviatlana Tsikhanouskaya, National Democratic Leader of Belarus

NGOs and Unions – Cooperation, Messaging and a Support for Local Initiatives

The main question Ms Tsikhanouskaya posed, and the main focus of the discussion was finding ways in which Dutch (trade and sports) unions and civil society organisations can help the Belarusian civic democratic movement.

Going forward, it was agreed that a more coordinated approach with larger cooperation between the organisations present in the Netherlands is required. Civil society would need to keep pushing both the EU and the Dutch government to look for effective ways to support what people of Belarus really need, and make sure that Belarus continues to be top-of-mind for both politicians and EU citizens. All agreed there is a need for more coordinated attempts to mobilize the Dutch public and politicians, and vowed to work together to ensure this happens.

Furthermore, Ms Tsikhanouskaya and her adviser spoke of this as time of gestures, symbols and messages, and the strong need for such symbolic actions like the raising the white-red-white flag of democratic Belarus in Amsterdam and Eindhoven, billboards displaying Belarusian art in Lithuania, attention from celebrities and influencers, and the writing of letters to political prisoners.

Similarly, consensus was reached that a greater focus should be placed on supporting local initiatives, and finding the right entries to make that possible. Both independent (trade) unions and grassroots NGOs have an important role to play in the peaceful, democratic transition of Belarus, as protesters are increasingly finding ways to connect outside of the established, institutionalized avenues.

“It is an honour to host the visit of Ms Tsikhanouskaya on our premises. More than 100 days have passed since the elections in Belarus, which were neither free nor fair. They have been followed by many protests and a civil uprising, and have resulted in huge human rights violations, torture, and deprivation of freedom for the peaceful protests. We at the NHC can express nothing but sincere admiration for the brave and continuing struggle, and we remain empowered and inspired to support Ms Tsikhanouskaya and a peaceful democratic transition in Belarus in any way we can.” – Pepijn Gerrits, Executive Director Netherlands Helsinki Committee 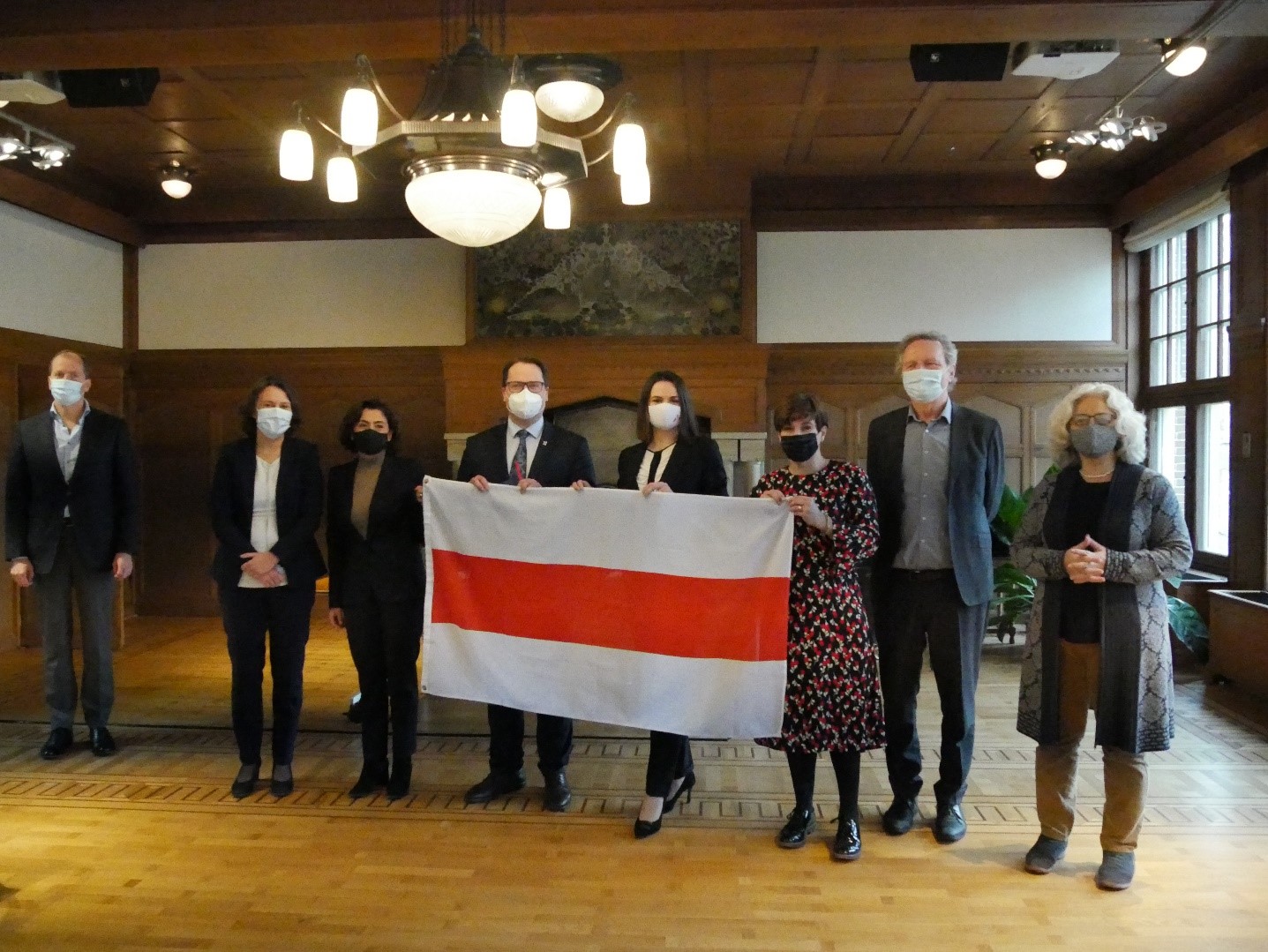 The discussion between Ms Tsikhanouskaya and Dutch parliamentarians focused on two main topics, that of economic sanctions and matters of impunity.

“Belarusians need the help of European countries. As we accept only peaceful means, foreign pressure on the regime is essential – we are asking for economic pressure. To stop import and export with Belarusian state enterprises, associated with Lukashenka.” – Sviatlana Tsikhanouskaya

Economic sanctions, as both a policy tool, and an expression of public opinion on a non-governmental level, were discussed. Ms Tsikhanouskaya and her adviser, Franak Viačorka, expressed the need for harder measures to be imposed on the regime by governments, as well as by companies and entrepreneurs which are dealing with Belarusian state enterprises. A practical measure discussed was the possibility for companies working with Belarusian state enterprises to put in place conditions on their cooperation, and impose a certain degree of conditionality with regard to the treatment of workers if they are to continue trade. In response to a concern about harsher economic sanctions hurting the people rather than the regime, Ms Tsikhanouskaya said: “The people are already suffering. They are ready for this.” Economic sanctions were specified to primarily mean the sanctioning of a group of companies and oligarchs which are helping to keep the current regime alive. Finally, a plea was made for the isolation of these companies, and thus the regime, which would in turn – it is hoped – lead to its demise and the opening of Belarusian society.

“The people on the ground need to know that there will be consequences for those who are prosecuting them” “We need to speak of justice, and we need to call things by their name, call out Lukashenka’s regime for what it is: Stalinist, terrorist, and totalitarian.” – Franak Viačorka

The final topic of discussion was that of the danger of impunity for perpetrators of grave human rights violations against the peaceful protestors. Prof Benedek’s OSCE Moscow Mechanism report on Alleged Human Rights Violations related to the Presidential Elections of 9 August 2020 in Belarus was noted as an important and much welcomed first step in providing an authoritative overview of human rights violations. Securing the systematic and professional documentation of crimes should be the next step of the countries that invoked the Mechanism, to follow through with the recommendations that the report provided. Advocating for initiation and application of the principle of universal jurisdiction at national level and taking on cases of grave human rights abuses and “crimes against humanity” (note: as recently in Lithuania) was marked as especially relevant by Ms Tsikhanouskaya and her adviser, and echoed by the parliamentarians.

“In every way we can we will continue to shed light on what is happening in Belarus and also continue to encourage the brave people in Belarus to keep fighting for their rights.” – Kati Piri, Member of the European Parliament for the Netherlands Labour Party, Progressive Alliance of Socialists and Democrats