The European Union and the Rule of Law: A new instrument

On 16 December 2020, the EU adopted a new policy instrument (to go in effect as of 01 January 2021), aimed at protecting the financial interests of the EU against breaches of the rule of law.

Read on for an analysis of the new rule of law instrument in this contribution by NHC Committee Member Jaap de Zwaan. 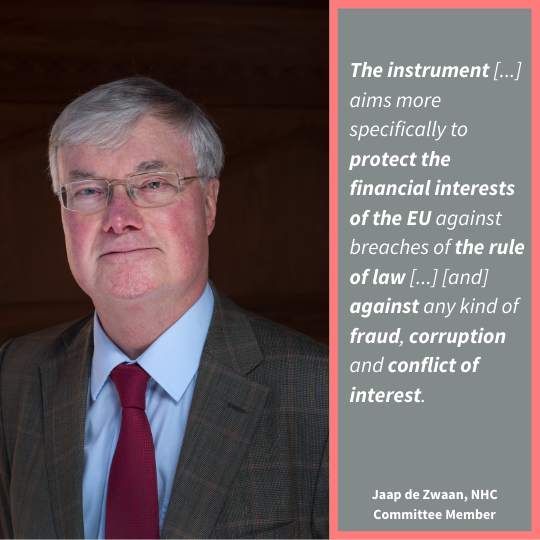 An explanation from an EU law perspective

The European Union (EU) has enriched its toolbox to combat violations of the EU’s fundamental values as embedded in Article 2 of the Treaty on European Union (TEU),[1] with a new policy instrument. The instrument, that has the form of an EU regulation of the European Parliament and of the Council, aims more specifically to protect the financial interests of the EU against breaches of the rule of law. The regulation was adopted on 16 December 2020 and will apply as of 1 January 2021.

Since the focus of the rule of law mechanism is the protection of the EU’s financial interests, this regulation should be seen as a specific instrument. It cannot be considered a tool to combat breaches of the rule of law in general terms, as these are addressed by already existing instruments: Article 7 TEU, the infringement procedure, and the so-called preliminary procedure.

Protection of the financial interests of the EU

The new rule of law mechanism is included in the “Regulation on a general regime of conditionality for the protection of the Union budget”.

The objective of the regulation is to protect, broadly speaking, the EU’s financial interests against any kind of fraud, corruption and conflict of interest.

According to the mechanism, appropriate measures shall be taken when breaches of the principle of the rule of law in a Member State risk affecting the sound financial management of the EU budget, or the protection of the EU’s financial interests “in a sufficiently direct way”. Although it is not immediately clear what should be understood by “sufficiently direct”, the breach apparently has to be a serious one. In such a situation, the Commission will submit a proposal for an implementing act to the Council, for adoption by a qualified majority.

A rule of law mechanism was already proposed by the Commission in 2018. However, it was only in the context of its July 2020 negotiations about the Multiannual Financial Framework and the EU Covid-19 Recovery Fund, that the European Council concluded that “a regime of conditionality” to protect the EU budget and the Recovery Fund “will be introduced”.

Objections of Hungary and Poland to new rule of law instrument

On 10 December 2020, the European Council discussed more particularly the fundamental objections expressed by Hungary and Poland against the rule of law mechanism. Both Member States were – and still are – of the opinion that the establishment of such a mechanism is contrary to the Treaties.

In the end, however, the European Council left the content of the draft regulation intact, and invited the European Parliament and the Council to immediately take the necessary steps to formally adopt the regulation, together with other connected instruments.[2]

That said, in order to arrive at a compromise, the European Council has accepted that Member States may launch an action for annulment of the regulation, once adopted, with the EU Court of Justice in Luxembourg. Although such an appeal has no suspensory effect according to Article 278 of the Treaty on the Functioning of the European Union (TFEU), the European Council has noted that the Commission will wait for the outcome of the Court proceedings, before proposing concrete sanction measures against individual Member States.

… the European Council has noted that the Commission will wait for the outcome of the Court proceedings, before proposing concrete sanction measures against individual Member States.

Assessment of the Hungarian and Polish position

In the case that Hungary and Poland – as is expected – launch an appeal against the regulation in legal proceedings with the Court of Justice, the main complaints of Hungary and Poland against the rule of law mechanism do not seem very promising. The conferral of competences upon the Commission to investigate possible infringements of the EU’s financial interests and, ultimately, to come forward with measures to sanction individual Member States, can be considered to be in accordance with the Commission’s general role as gardien du traité, or ‘guardian of the Treaty’ (as referred to in Article 17(1) of the TEU). In this case the more so, since the powers attributed to the Commission may result in the submission of proposals that must be explicitly adopted by the Council, by a qualified majority.

Moreover, the Member State concerned can appeal to the Court of Justice against concrete sanction measures addressed to it. In that sense, the legality of the relevant decisions may be tested by the highest European judge as well. On the other hand, also in this case the appeal will not have suspensory effect (the reference here is to the same Article 278 TFEU, as mentioned earlier). That means that the contested act will remain in force in the first instance.

Furthermore, because of the complications linked to an appeal procedure with the Court of Justice, some have argued that the implementation of the rule of law mechanism may be seriously delayed, for years. However, that concern is not entirely justified, since parties involved in a Court procedure (in this case most probably Hungary and Poland as applicants, and the European Parliament and the Council as defendants) can ask for an “expedited” procedure providing for fast and simplified arrangements. If such a request is indeed granted, the delay may be one year, or even less.

The new mechanism cannot serve to sanction violations of the rule of law in general terms. As already hinted at in an earlier contribution, and recalled in the introduction of this article, rather the Article 7 TEU procedure, the ordinary infringement procedure, and the so-called preliminary procedure can be qualified as such.

The Article 7 TEU procedure is a purely political procedure, and aims to counter a so-called “clear risk of a serious breach” by a Member State of the values referred to in Article 2 respectively to establish the existence of a “serious and persistent breach” by a Member state of those same values. In the latter case, the Council may decide to suspend certain rights resulting from EU membership, [3] including the voting rights of the Member State in question.

Now, of course, discussions at the political level can serve best to tackle outstanding problems concerning the respect of the EU’s fundamental values and principles. However, in light of the heavy decision-making modalities of Article 7 (ultimately, unanimity, meaning the votes of all Member States minus the one of the Member State concerned), the mechanism is hardly workable in practice.

Regardless, the Article 7 procedure was triggered twice since 2017. Proceedings were launched in December 2017 for Poland by the Commission, and in September 2018 for Hungary by the European Parliament.[4] The proceedings are still ongoing.

In contrast, the infringement procedure of Article 258 TFEU is a judicial procedure initiated by the European Commission at the Court of Justice, to establish that a Member state has failed to comply with an obligation under the treaties. Violations of the fundamental values and principles of the EU as embedded in Article 2 TEU similarly lend themselves to be the subject matter in such a procedure. [5]

In case the Court finds that a member state indeed has failed to fulfil an obligation under the treaties, the State concerned is required to take the necessary steps to comply with this judgment.

The preliminary procedure of Article 267 TFEU organises a system of cooperation between national courts and tribunals and the Court of Justice in Luxembourg about questions related to the interpretation of EU law provisions. The application of this important instrument to ensure a uniform interpretation of EU law in the Member States has already resulted in several judgments where frictions with EU fundamental values and principles – in those cases more specifically the independence of the national judiciary  – were at stake.[6]

The need for political surveillance and judicial control

Whereas the new rule of law mechanism for protecting the EU’s financial interests is to be welcomed, we can expect that, in practice, an assessment by an independent court (in this EU context the Court of Justice) will always be required to settle a conflict regarding assumed violations of Article 2 TEU once and for all.

The same goes for the possible application of the often referred as “nuclear” option of Article 7. However, in order to make that procedure more workable, there are plenty of reasons to simplify its decision-making modalities, for example by replacing the unanimity requirement by qualified majority. Perhaps the “Conference on the Future of Europe” (originally scheduled in the first half of 2020, now delayed to at least the first half of 2021 due to COVID-19) provides an opportunity to at least discuss the possibility of such a simplification.

In contrast, the infringement procedure as well as the preliminary procedure, have served good purpose so far. To that extent, the contribution of the Court of Justice can only be appreciated. Yet, in order to further improve the effectiveness of these procedures in case of assumed violations – for example, of the rule of law – the possibilities to have urgent or expedited procedures applied could in future be explored.

Of course, it is far preferable that violations of the rule of law and other fundamental values can be reversed before giving rise to formal decisions of the Council imposing sanctions or court room conflicts.

Debates at the political level, in the framework of the European Council, the Council and the European Parliament, must serve as the primary platform to achieve such an objective.

In this respect much more can and should be achieved than is the case thus far.

[1]The text reads as follows: ‘The Union is founded on the values of respect for human dignity, freedom, democracy, equality, the rule of law and respect for human rights, including the rights of persons belonging to minorities. These values are common to the Member States in a society in which pluralism, non-discrimination, tolerance, justice, solidarity and equality between women and men prevail.’

[3]One could think of financial advantages and participation in areas of EU cooperation.