For the first time ever, the European Commission is issuing a report on the rule of law situation in all 27 EU member states. The Rule of Law Report, planned to be released annually and with the first version expected to be released in September 2020, is part of the new comprehensive European rule of law mechanism, designed to prevent and respond to breaches of the rule of law by member states. In addition to governments, the European Commission is asking civil society organisations, universities and professional organisations for input to the report. It aims to monitor all related developments in member states, including the independence of the judiciary, anti-corruption efforts, the freedom of the media and checks and balances.

Tapping into our network of judicial and rule of law experts, the NHC and NJCM contributed to the Rule of Law Report, describing the situation of the rule of law in the Netherlands (click here to read our full submission). Also, as an introduction to our contribution for the Rule of Law Report, NHC Committee Member, Jaap de Zwaan, wrote the following piece on the general rule of law situation in the EU, and outlined potential steps forward in upholding the rule of law. Read his commentary below: 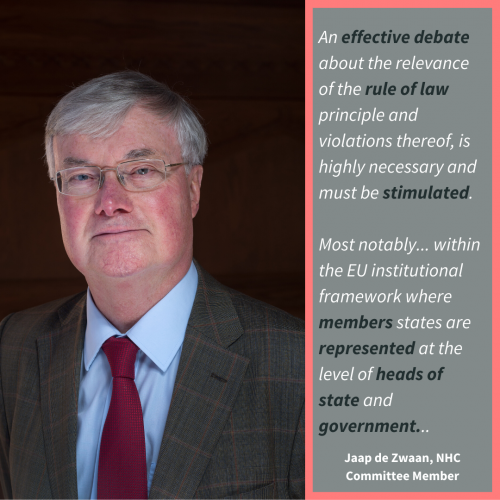 The relevance of the rule of law principle

In order for the European Union (EU) to function, respect of the rule of law principle is crucial. Cooperation in the EU is based on established rules. These rules can only be effective if they are the outcome of a democratic decision making process and are implemented in an environment in which the rule of law is respected.

The Charter of Fundamental Rights of the EU submits the EU and its institutions and organs —as well as the member states when implementing EU obligations— to a series of rights and principles, formally recognized at EU and international level.

A continuous failure to respect the rule of law can easily undermine the stability of the governance infrastructure, not only of the member state in question, but of the EU itself as well.”

All EU member states are member of the Council of Europe, the international organisation aiming at upholding human rights in its 47 member states throughout Europe, and party to the European Convention for the Protection of Human Rights and Fundamental Freedoms (ECHR).

Monitoring the respect of EU rules and the rule of law

In order to monitor the state of affairs with regard to the respect of the rules and principles of the EU, it indeed is the best approach to address the situation in all member states on a regular basis, and —in that context— to allow interested third parties (e.g. states and interest groups) to give an opinion.

A continuous failure to respect the rule of law can easily undermine the stability of the governance infrastructure, not only of the member state in question, but of the EU itself as well. Therefore, when violations, or risks of violations, do occur, both the EU and its member states must be attentive and resolved to address these issues.

In cases of a potential disregard for the rule of law in EU member states, discussions at the political level of the EU are the primary instrument to counter such problems. However, when these situations persist, legal action must be considered.

…in cases wherein the respect of the rule of law is at stake, political debate should be the primary instrument to discuss and, where necessary, to resolve the problems concerned.”

In the EU treaties there are legal instruments which can be used to monitor member states’ respect for the rule of law, human rights, and fundamental freedoms. The most important are, respectively, the ordinary infringement procedure of Article 258, Treaty on the Functioning of the European Union (TFEU) and the, specific, Article 7, TEU procedure. The preliminary rulings procedure of Article 267 TFEU, enabling national courts to cooperate with the Court of Justice regarding the interpretation of EU law provisions, can also render good services in this respect.

Current practice in monitoring the rule of law in member states

In recent years, at regular intervals, political debates have been held in the European Parliament about alleged violations of, inter alia, the rule of law principle in one or more member states. On the other hand, the frequency and impact of similar debates in the European Council, comprised of heads of state and government, and the Council, comprised of ministers of member states, have only been limited in comparison.

In particular, the application of the Article 7 TEU procedure —essentially ‘political’ in nature— has thus far failed to result in a meaningful action by the EU. This is no surprise though, given the stringent decision making requirements embedded in the respective paragraphs of the provision. In that respect the whole Article 7 procedure, in practice referred to as the ‘nuclear’ option, can actually be perceived as a ‘dead end’ street.

In contrast, judicial mechanisms available within the EU framework have been utilized more often. In particular, the infringement procedure has been successfully initiated several times by the Commission when taking action against individual member states. Furthermore, the Commission and the European Parliament have -each institution once- started initiatives in the framework of the Article 7 TEU procedure.

Moreover, in a number of preliminary rulings the Court of Justice, by interpreting the concept of ‘effective legal protection’ in Article 19(1) TEU, has underlined the vital importance of independence, quality and efficiency of national justice systems.

It therefore must be concluded that the Court of Justice has demonstrated to be an effective tool in being able to secure the respect of the rule of law principle in the EU and its member states.

It is striking to note that, thus far, legal procedures have been initiated exclusively by EU institutions, namely the Commission, and in one case the European Parliament. On the contrary, to date, a member state has never unilaterally undertaken an initiative for example within the framework of the special infringement procedure of Article 259 TFEU —enabling member states to start legal proceedings against another member state— or the aforementioned Article 7 TEU procedure. Nor has any member state ever initiated an action against another member state within the framework of the Council of Europe infrastructure.

To reiterate, in cases wherein the respect of the rule of law is at stake, political debate should be the primary instrument to discuss and, where necessary, to resolve the problems concerned. However, as already mentioned, thus far the results of political debates at the EU ministerial level have only been modest. Here a further impetus is thus necessary.

…a number of preliminary rulings the Court of Justice…has underlined the vital importance of independence, quality and efficiency of national justice systems.”

Additionally, reinvigorating the push for the EU’s accession to the ECHR can also improve respect for the rule of law in the EU. Since the entry into force of the Lisbon Treaty, on 1 December 2009, the EU’s accession to the ECHR has become a legally binding obligation for the EU and its member states.[3] Accession has, however, not yet been achieved.

Nevertheless, since all member states are party to the ECHR themselves, even without a formal EU accession having taken place, any member state can undertake action within the legal framework of the Council of Europe against other member states. The inter-State application procedure is an example of the instruments that are available in that regard.

While contributions to the debate made by the European Court of Justice are laudable, it should not only be that institution addressing issues of the rule of law. It would indeed send a negative signal if reform related action at the EU level is left to the judiciary. First and foremost, these issues are the responsibility of democratically elected politicians.

Apart from that, with regard to legal proceedings before the Court, hopefully still more use can be made of the so-called fast track procedures. Because, serious problems can best be dealt with in a (fair but) timely manner.

Furthermore, the final adoption of the Commission proposal dating back to May 2018 and still under discussion in the Council of the EU, will be a welcome development. The initiative enables the Commission to propose to the Council of the EU on sanctioning member states in cases of ‘general deficiencies’ as regards the rule of law.[4] This is a useful tool in that the simple threat of sanctions imposed on member states may have a preventative effect for violations. In case, however, such violations do occur, financial sanctions can be effective tools to incite the member state(s) concerned to remedy the deficiencies concerned.

An effective debate about the relevance of the rule of law principle and violations thereof, is highly necessary and must be stimulated. Most notably, this debate should be stimulated within the EU institutional framework where members states are represented at the level of heads of state and government respectively at ministerial level, namely the European Council and the Council.

The annual Rule of Law Reports of the Commission may provide an incentive for such debates to take place.

Finally, the use made of existing legal instruments available to monitor and, where necessary, combat violations of the rule of law, can still be intensified.

[1] That provision reads as follows: ‘The Union is founded on the values of respect for human dignity, freedom, democracy, equality, the rule of law and respect for human rights, including the rights of persons belonging to minorities. These values are common to the Member States in a society in which pluralism, non-discrimination, tolerance, justice, solidarity and equality between women and men prevail.’

[2] See the reference in Article 49 TEU. The first sentence of that provision reads as follows: ‘Any European State which respects the values referred to in Article 2 and is committed to promoting them may apply to become a member of the Union.’

[3] See Article 6(2) TEU: The Union shall accede to the European Convention for the Protection of Human Rights and Fundamental Freedoms. Such accession shall not affect the Union’s competences as defined in the Treaties.

[4] Proposal for a Regulation of the European Parliament and of the Council on the protection of the Union’s budget in case of generalised deficiencies as regards the rule of law in the Member States, COM(2018)324 final of 2 May 2018.